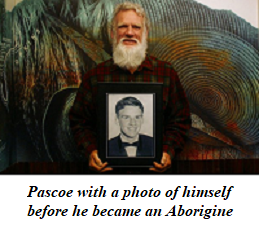 The SMH has announced that the ABC has no plans to abandon its long awaited two-part Dark Emu documentary. First announced in 2019, with plans to air in 2020, it disappeared off the radar until this latest announcement.  Recently, I asked ABC MD, David Anderson, if the project had been dropped due to rising concerns over the questionable (to put it mildly) nature of the Bruce Pascoe’s grand fraud.  That was prior to the publication of Farmers or Hunter/Gatherers?  The Dark Emu Debate by Drs Sutton and Walshe. I followed up my query after that book came out.  Needless to say, I have not received a reply.

But it seems that it was COVID, rather than the fact that Pascoe is shameless fabulist, which has delayed the production reaching our screens:

Dark Emu, a two-part documentary series from respected production company Blackfella Films, was announced in October 2019, with the series to be co-written by Bruce Pascoe and the production company’s Jacob Hickey. The ABC was attached as the broadcaster.

But the show was still in pre-production when the pandemic struck, meaning no footage has yet been shot.

“This story would travel across the country, and we were in early stages of pre-production when COVID hit,” said Darren Dale, co-founder of Blackfella and an executive producer of the series. “That meant we couldn’t access any of the Indigenous communities, and even now we can’t start that again with any confidence.”

Fair enough, but why make the announcement just now?  For my money, the Pascoe brigade is mounting its effort to sideline Sutton, Walshe and their criticism of Dark Emu. The way the  SMH article downplays the academics’ withering criticism of Pascoe and his scam is telling:

However, it is understood that the shape of that show will be determined by Mr Pascoe’s response to Farmers or Hunter-Gatherers: The Dark Emu Debate, the book by anthropologist Peter Sutton and archaeologist Keryn Walshe that accuses Pascoe of being broadly wrong in his claim that some Indigenous Australians were practicing forms of agriculture at and prior to the arrival of Europeans.

‘Broadly wrong’ is rather like describing Xi Jinping as ‘a bit confrontational’.  But to continue:

Pascoe is understood to be working his way through their book at the moment, and his response will inform the creative direction of the series.

Dale claims the series was never intended as an “unfiltered” adaptation of Pascoe’s book.

“Any statement of fact we would include in the film would have to be able to be verified or have sources that we had gone to independent of Bruce’s book,” he said. “We have to provide the broadcaster with a transcript that has sources and is fact-checked. That’s normal practice, one of the delivery requirements for both public broadcasters.”

If Pascoe’s response to Sutton and Walshe is substantive in any way, i.e if it address specific criticisms, we won’t see the final production this side of Judgement Day.  Hell will freeze over before Pascoe goes down that road.

And if the bolded statement is really true, an exception seems to have been made in relation to the  ABC Education digibook on Dark Emu.

I have previously written that the principal agencies that prop Pascoe up, viz the ABC and the State Education departments, are the key to ridding public debate of this faux historical excrescence.  You would think that the objective, forensic demolition of Dark Emu by the Dark Emu Exposed website, the Sutton and Walshe book and my own Bitter Harvest, would be all the evidence they would need to dissociate themselves from this mountebank.

But if Climategate tells us anything, it is that, in today’s post-truth world, ideology and rent-seeking trump truth and objectivity any day, and always at the ABC.