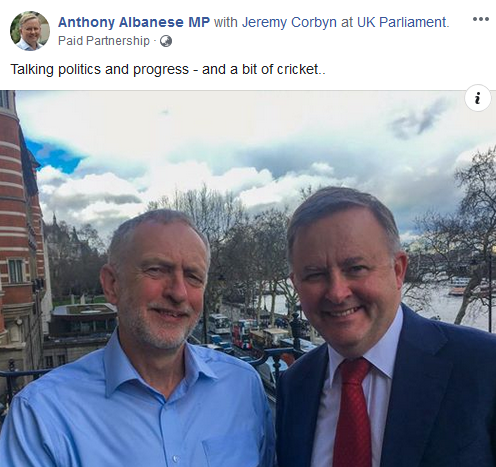 One doesn’t turn to the Sydney Morning Herald and its Peter Hartcher for insight but every now and then, blind-pig style, between them they turn up an acorn. With the benefit of 20/20 hindsight, a Hartcher column that went to press in June, 2017, verged on the astute. Here’s a little sample of his thoughts, which appeared beneath the headline ‘Why Anthony Albanese benefits from Corbyn’s success in the UK election‘:

The Corbyn experience will also be used by allies of the Left faction’s Anthony Albanese to put him forward as the candidate of “authenticity” in contrast to the scripted Labor leader Bill Shorten.

Shorten has put Labor consistently ahead in the polls and is not under any imminent challenge, but Albanese and his allies will start to organise if Shorten appears to be failing at any point.

And organise they most certainly have — organised a new line of patter in particular. Corbynesque “progress”, which Albanese rather favoured in the 2018 Facebook post reproduced above, has been replaced with a good word for market-oriented economic growth. Marrickville’s class warrior put it this way on Wednesday when making his case to take charge as Labor leader.

“We need to explain our position much better on how we will create wealth, not just how we will share wealth. Unless we are growing the pie then sharing it becomes a case of diminishing returns.”

Class struggle, anyone? Ssssshhhh! Don’t mention that until the caucus votes are counted.