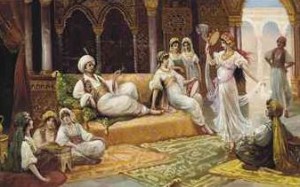 Did you catch Q&A last night? If not, you missed another of those lessons in diversity as defined in Ultimo and Southbank. By that standard, the bookers certainly did their best to be inclusive:

As for compere Tony Jones, he represented, as usual, $300,000 worth of taxpayer-funded interruptions and smuggery. Good work if you can get it.

At Quadrant Online, where we watch Q&A so you don’t have to, the hour passed in pall of mounting frustration. Would no one ask Sheik Charkawi about Islamic scholar Abu Hanifa, after whom his youth-outreach organisation is named? That was a pity because Hanifa advanced at least one opinion which might have prompted lively discussion.

Asked whether Muslim conquerors could have their way with the captured wives of Islam’s enemies, the Islamic jurist’s ruling was nuanced in the extreme.

If wives are captured and enslaved at the same time as their hubbies, those marriages must be respected, Abu Hanif decreed, as both entered Muslim territory simultaneously.

If the wife is captured and enslaved first, however, the marriage must be considered void, meaning the woman’s new owner would be entirely within his rights to have her brought to his tent whenever lust stirs the loins.

Alas, Abu Hanif’s perspectives on captivity and the connubial went unmentioned. So, too, were Q&A viewers denied — and this was the  greater pity — an exploration of the Sydney sheik’s assertion that Muslim youths are being locked up for nothing more threatening than pronouncing the acronym ‘ISIS’.

“You can literally be a young Muslim boy and say the word ISIS and end up in the principal’s office and led away in handcuffs. Society is very paranoid.“

Charkawi’s thumbnail biography on the Q&A site describes him thus:

In 2003, he founded the Abuhanifa (sic) Institute which teaches the essential sciences of Islam to young Muslims. Its ultimate focus is generational change. Sheikh Wesam continues to work and participate with organisations and events that strive for social cohesion and is a keen advocate of reaching out to the wider Australian community.

The sainted Abu Hanif’s edicts on hyperbolic utterances are not known, but Robert Spencer’s Jihad Watch has much on slavery, slave girls and the “Islamic science” of seventh-century dating protocols.  It can be read in full via the link below.