Over to you,
Mr Chessell 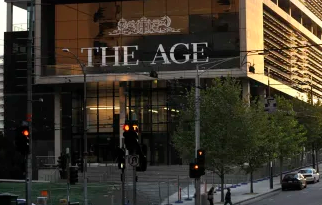 Pete Jonson’s blog honours economist and monetary theorist Henry Thornton and is well worth bookmarking for regular visits. He was reading Victoria’s papers over the weekend as the state endured the latest consequences of life under a premier who appears to operate on the theory that sly is an adequate substitute for smart. Remarkably, his post puts in a rare but in this case warranted good word for The Age which, blind-pig style, has indeed produced a golden acorn in Chip Le Grand’s ‘State in Crisis: who’s in charge?‘.

Chip had better watch his step in the newsroom. When The Age‘s kiddie corps last month devined that editor Alex Lavelle was insufficiently woke and had dared to publish material with which they disagreed, a petition was raised calling upon him to change his ways. Some editors would have axed the signatories on the spot, but not Lavelle, who sacked himself instead. In a further example of the unintended consequences that flow from almost all leftoid initiatives, the Collins Street creche now awaits the appointment of a new editor who, by newsroom reckoning, might well be a good deal less congenial than the one forced out, given that the decision will be made by Nine editorial director James Chessell. According to Quadrant Online’s sources, the anxious little luvvies are now reminding each other that Chessell once worked for Joe Hockey. Oh, the horror!

The slot most certainly will not be filled by some fire-breathing right-wing death beast — The Age is, after all, steeped in its legacy of Fairfax mindlessness —  but an editor, a genuine editor who actually edits and understands the city his paper professes to serve, would be a huge gain for Andrewstan.

More than a decade ago, when British import Andrew Jaspan occupied the editor’s office, the paper made a deliberate transition from a sane centre-left publication to aping The Guardian‘s focus on a relatively small market segment. On Fleet Street, where many newspapers yet survive and competition is fierce, that makes sense: lock-in your specific readership with news and opinions that preach to the choir.

In Melbourne, the move was lunacy. With only two papers, occupying the centre ground is essential. There are only so many Greens voters and they’re simply not enough to support a commercial publisher. As for the advertisers who once paid the bills, what sort of demented logic could sustain the belief that stores and services catering to ‘A’ and ‘B’ readers, your better-heeled sorts, would see current Age readers as potential and desirable customers? There must be very few Toorak Road boutiques eager to have greasy-sweatered vegans parking their bicycles out front.

Until Mr Chessell announces his decision, one can live in hope that a decent editor gets The Age back on track. Recruiting a crosstown counterpart to the Herald Sun‘s Andrew Bolt would be a good start in its assurance that the paper is to be no longer devoted to presenting only one (entirely predictable) point of view. A decent cartoonist also wouldn’t go astray, as those who recall when Leunig could actually raise a smile must be getting very long in the tooth.

But what The Age most needs is a hard-case Chief of Staff with the confidence and backing to tell the next delegation of kiddie reporters to take a running jump when they come knocking with further demands for yet more woke coverage of their favourite causes.

Victoria is a state where its Supreme Court is shown 7-0 to be dunderheads’ collective, where senior police had a lawyer informing on her clients and a parade of tarnished brass was afflicted with memory lapses under oath, where the simple business of digging a tunnel under the Yarra goes nowhere except to court, and where ministers know more of branch stacking than the public good. In such a state, a  tenacious, square-bat newspaper, even if no closer to good sense than centre-left, would be most welcome.

Over to you, Mr Chessell.

Our agile and innovative artistes

So much for that theory