It must be a great comfort to ABC Managing Director Mark Scott to know that the national broadcaster has such good friends when all is dark and woe is the order of the day. Over the weekend the Socialist Alliance, assorted Greens and representatives of our more bellicose unions took to the streets to avow how much they like Mr Scott and what his underlings put to air.

And then there is Opposition leader Bill Shorten, who might have asked the “editor-in-chief” why one-person news bureaux in Morwell and Gladstone are being shut down as part of the drive to trim 5% from the ABC’s budget. Surely they could not cost that much to operate, and it’s not as if both towns haven’t produced their share of hot stories of late. In Morwell, the locals have been coughing and spluttering and signing up with class-action lawyers after a pit fire that burned for months in the town’s open-cut coal mine. And up in Queensland, well there has been that kerfuffle about dumping sludge onto the Great Barrier Reef, plus the massive port expansion to handle all the CO2-rich coal being shipped to foreign furnaces.

But does Shrill Bill put those questions to his public broadcasting cobber? Does he wonder why his mate is cutting classical music while continuing to indulge The Chaser and writing big cheques to a couple of gnarled journalists formerly employed as mouthpieces for Labor PMs

Not a word of it! Not when there is someone else to blame. 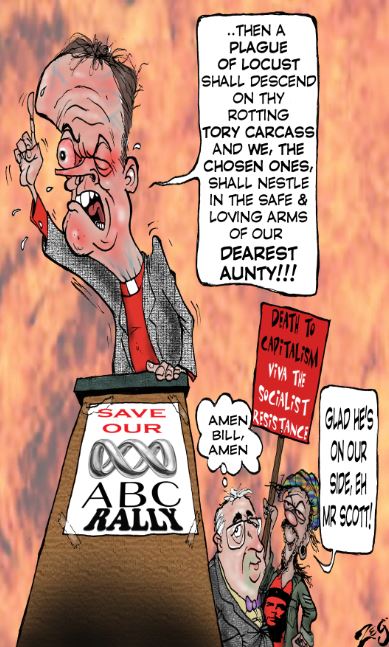 A Democracy if We Can Keep It