My Days as an Outcast of the Ocean 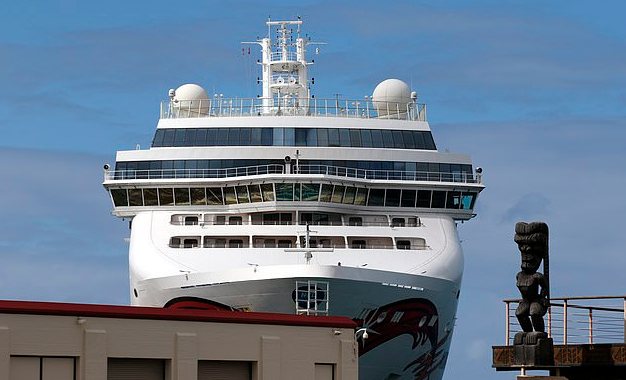 The PA came to life: “Good evening ladies and gentlemen, this is your captain speaking. On behalf of our flight crew, I welcome you all on board the Qantas repatriation flight, Honolulu – Sydney.”

The cabin, full to the luggage racks with weary, sweaty and anxious Australians from the cruise ship Norwegian Jewel (above), exploded with cheers and clapping. The captain continued: “Every member of our crew is a volunteer. We came to Honolulu to bring you home.” The cheer was louder.

“We volunteered to come for you because we felt that our passengers might be our parents. grandparents, brothers and sisters.

“We are all Australians here”.

The cabin fell eerily quiet after that, many faces streaked with tears. “This is our last flight before most of the Qantas international fleet is grounded. All we ask is that when this is over and you start flying again – remember who came to your help in time of need and, hopefully, you will choose Qantas”.

There was silence. Then someone in the back shouted: “Three cheers for the Captain!” The entire plane responded: “Hurray! Hurray! Hurray!” Another voice, this time a female one: “Ozzie, Ozzie, Ozzie!” All 300 passengers responded with a deafening “Oi, oi, oi!”

Crew members, standing in the isles for the obligatory safety-briefing intro, were smiling indulgently and singing out themselves. There were cheers for an 18-year-old flight attendant, whose birthday was that day, and for the flight crew.

It was an unforgettable moment of unity, gratitude and relief – we were going home! This group of people from every imaginable background felt like one big family – smiling faces, small gestures of kindness, care and solicitous support for those who needed it; strangers talking to each other as if long-lost relatives, sharing food, drinks, hand sanitisers, tissues and wotnots, helping the old and frail with their luggage. The feeling of togetherness, kindness and, yes, love, was pervasive.

It took a while for these excited, relieved and happy folk to quieten down and settle for the long-haul flight. These priceless moments of shared joy were the fitting conclusion to our unusual journey among almost three thousand passengers on a ship nobody wanted.

Everyone knew that, after landing in Sydney, we would be quarantined for two weeks. The thought that it would be at home was reassuring. Fortunately, while there was no corona virus infection on board, we understood the concern of those back home. The main thing was, finally, we were going home! And, oh boy, how lucky we were, how lucky!…. It could’ve been so different…

On February 28, at Sydney’s Circular Quay, we boarded the Norwegian Jewel for a 21-day South Pacific cruise. The quietly efficient, well-rehearsed boarding had the added precaution of temperature measurements – a stark reminder of the spreading Corona virus infection somewhere far away across the globe.

The temperature readings and the exclusion of people who had visited China and other affected places were an excellent demonstration of the seriousness with which the shipping company took their duty of care. Combined with reassurances we had received from the government site, SmartTravel, and from Avant, our travel insurers, that our destination (Tahiti) was not at all dangerous, we felt that all reasonable precautions had been taken.

The crowd – Boomers, young families with children, newlyweds and bucket-listers — was good-natured, cheerful and friendly. If the rich and powerful were among the passengers, they were well-hidden. The crowd bore all the hallmarks of ‘the neighbors next door’, people from all walks of life, determined to have a good time while getting their money’s worth.

The cruise was all that was promised ­­– exotic places, new people, scrumptious food, world-class entertainment and, insidiously seductive, the illusion of every passenger being someone important. ‘Sirs’ and ‘Madams’ were uttered at every turn, heightening this feeling. It took an effort to remember not to take oneself too seriously and keep one’s feet on the ground. There seemed to be a direct connection between the size and frequency of tips and intensity of Sir-ing and Madam-ing. In short, the trip was shaping up as an enjoyable adventure, a good time being had by all.

It all came to a sudden halt when we were denied docking in Vanuatu, French Polynesia, and then in Australia. Suddenly, we were dangerous and unwanted. Was there COVID-19 infection on board?

Ubiquitous containers with ethyl alcohol appeared at every corner. Frequent handwashing became de rigueur. Entry to any food venue was allowed only after a generous amount of alcohol was sprayed on hands. Instead of picking dinner plates from the stack and self-loading, a plate was given out and the food distributed by gloved crew members. Handshakes, hugs and kisses disappeared. Lifts, those hives of inter-deck activity, were called and deck number buttons pressed, either by an elbow or a middle finger’s bent joint. Gym junkies were undeterred, but instead of giving off the odour of healthy sweat it was the smell of alcohol.

Otherwise, life continued as before. The crew were enthusiastic and friendly, the food plentiful and tasty, the Pacific Ocean endlessly different and magical. The lectures, cinemas, quizzes, dancing, singing, music and fun continued as if nothing untoward were happening. We even managed to visit New Caledonia and Fiji on the way to French Polynesia. This illusion of care-free life continued until the ship’s Captain announced that the authorities would not let us dock. The ship would head to Tauranga in New Zealand, whence passengers would have to make their own way home. Many bought airfare tickets online and felt at peace with the world.

Then the Captain announced that New Zealand also would not allow docking. We would have to go back to Fiji. He advised us to buy tickets home from Fiji. The passengers who bought flights from New Zealand, went ahead and bought more tickets.

A couple of days later, he announced that Fiji would also not allow us in. The ship would sail to Honolulu. The passengers — you guessed it — were advised to book their flights home from there. Most ended up with four sets of air tickets, including the original ones, which they could not use. Each time the captain announced yet another change of plan and gave travel advice about getting home, he re-iterated that the company would refund the cost of the cruise as well as the cost of unused airfares. We are still waiting.

The formerly happy atmosphere was getting more tense with every change of plans. Some passengers reacted with panic attacks, tears and emotional vulnerability. However, internet access, free of charge, allowed contact with families as well as re-booking, cancellations and insurance claims.

Our entertainers, in the same predicament, did all they could to maintain civility and sanity. The atmosphere at nightly performances was of shared experience and understanding. It was not unusual to have a lighthearted discussion between performer and audience. Emotions flowing from the stage were willingly absorbed by the audience and gratefully returned. It reminded me, however incongruous this might seem, of unity between war-time performers and the troops.

The shared problem changed the way passengers and crew interacted. Now it was communication between equals facing the same calamity. The ‘obligatory’ deference and obsequiousness was out of place. Contrary to the old adage that familiarity breeds contempt, nothing like that happened – quite the opposite. The crew seemed determined to carry on as though nothing untoward was happening. Many perceived their work as genuine caring.

Considering my wife and I, having been refugees to Australia and the knowledge of the fate, in 1939, of the Jewish passengers aboard the MS St Louis, I felt a sinking déjà vu. I am not being melodramatic. It was, quite simply, the way I felt. The parallels were disconcerting – not being allowed to land anywhere, becoming ‘refugees’ again. I tried to keep my thoughts to myself, not wishing to complicate others’ already tense emotions, but these thoughts were real and troubling.

On the way to Honolulu, we were allowed to stay overnight in Pago Pago, capital of American Samoa – but without disembarkation. This was enforced by police squad cars, parked alongside. We were refueled, re-provisioned and told to push off in the morning.

Then, with two or three days until arrival in Honolulu, a propeller fell off the ship.

As our cabin was near the front, we heard nothing. Friends closer to the back, were woken up by a loud bang in the middle of the night. The propeller, hurled up by the rotation of the engine shaft hit, the ship’s hull. Fortunately, it did not slice through the metal and make a big jagged hole before sinking to the bottom. In the morning, we noticed just one water trail instead of the usual two. Our ship was a lame duck limping across the calm Pacific. This did not add to feelings of confidence.

Meantime, passengers were organising committees based on national affiliations. Australians contacted Australian TV and Radio networks, DFAT and the Australian consulate in Honolulu. The consulate were helpful and – judging by the results – brought us home. We even became ‘news’ back home.

As far as repatriation of their citizens went, the responses of various governments differed. America, despite the protests of Honolulu’s inhabitants, allowed Americans to disembark. Australia sent a Qantas flight to collect us, and our New Zealand cousins. Europeans, Israelis and South Americans were similarly accommodated. The Russians and Ukrainians were helped the least. Some asked their  consulates for help. The response (so we were told) was: “You found enough money to buy the luxury cruise ­– you will have to buy your own way home.” As people comfortable with both English and Russian, my wife Valentina and I became emergency translators and befriended many Russians. When the Australians’ disembarkation was delayed by one day, our aggrieved Russian acquaintances did not hesitate to display an acute attack of Schadenfreude.

We were told the reason for delay was a strike by flight crews’ demanding more pay. Whether or not there was truth in that did not matter. Australian honor was at stake. Valentina, without missing a beat, responded with a polite and quite convincing: “That is not so. It is simply that our government, caring to maintain social distancing, took a bit of time to scrounge up another plane, so that we will be sitting one seat apart from each other.” The looks of amazement and respect on our interlocutors’ faces were priceless.

Our Australian reputation intact, we were bussed to an inconspicuous corner at Honolulu Airport where our plane was waiting. Accompanied to the airport with a police escort, flushing lights and sirens, it was the last time we felt like VIPs. A couple of hours later, after cursory customs/passport control, we were in QF6034, flying home.

There would be two weeks’ isolation in a small Sydney hotel room – with boredom and annoyance at being cooped up – but it would be at home! QF 6034 already felt like home, a feeling of not being forgotten, of being a part of a country which we called ‘home’. We were all unbelievably lucky.

The French Revolution: Guilt and Atonement