The strike-breaking “Operation Alien” (1950-55) was an official enterprise, albeit just as secret as The Association’s secret army described in Part One.Operation Alien would break subversive strikes and maintain order, using combinations of civilians and troops. [i]

Prime Minister Robert Menzies launched Alien to ensure that essential services and industries continued after the Communist Party Dissolution Act came into force in October, 1950. One outcome of the Act would be the naming and banning of various union officials, and Menzies knew that the response would be strikes on the waterfront and in coal mines and transport.

Les Louis, a retired associate professor of history at the University of Canberra, says Alien was basically run by Department of Labour head Henry Bland, and ASIO had nothing to do with it. Alien had been the best kept official secret of all time. Louis interviewed Bland long after Bland retired, “and Bland still denied any knowledge of Alien, he denied to his dying breath that it ever existed. I got the facts from the archives.”[ii]

The initial plan was to use civilian strike-breakers, sworn in as special “Peace Officers”, with troops to be used as last resort. But   Henry Bland, Alien’s dominant bureaucrat, convinced the politicians to use troops first. (The troops could carry their personal weapons to the concentration points but would go to the job sites unarmed and protected by police).

Louis says troops-before-civilians was a brilliant tactic by Bland and his fellow mandarins. During the war people had got used to seeing troops on the wharves; it was not a shocking sight. Volunteer labor would have been intensely provocative to wharfies. But Alien was on a scale far beyond the wharves. Use of troops became a routine part of anti-Communist planning, he says.[iv]

The view of Louis, a self-professed Marxist historian, is that Australia’s key industries – wharves, coal and railways – were run-down after the Depression and the war, and were also in the hands of Communist union leaders. In addition, the late 1940s were a rare period when laborers had the upper hand in industrial bargaining. Hence, although the overt issue for the government was Communist imperialism, breaking the Communists’ industrial power via Operation Alien was also the key to restructuring those inefficient industries.[v]

Menzies gave Alien even higher priority than troop needs for the Korean War and the training of national servicemen. When US President Truman urged the government to send more troops to Korea, Menzies instead sent the aircraft carrier Sydney.[vi]

Application of Alien to Papua-New Guinea, for reasons unfathomable, involved the shipment of 2,300 .303 rifles and 200,000 rounds of ammunition. Another 20 .303 rifles, bayonets and accessories, labeled as “Merchandise”, went to Nauru.[vii]

On cue, Australian mining and waterfront stoppages began in early 1951, which the government interpreted as a Red conspiracy, rather than industrial disputes.

The government had some ground to fear the worst from Communist insurrectionists. In 1948, Queensland Communist leader Gilbert Burns had said that, in the event of any war between the Soviets and Australia, Australian Communists “would fight on the side of the Soviet Union”.[viii]

Soviet defector Vladimir Petrov claimed that Moscow had provided $25,000 funding the party in the early 1950s. This was eventually verified when a receipt for $25,000 turned up from party general secretary Lance Sharkey for an alleged Soviet “purchase of wool” in 1953.[ix]

According to the NSW south coast district secretary of the Communist Party, one of the central committee secretariat members had developed a strategy to use the coal strike to bring on revolution in Australia. The plan involved “surrounding” Sydney with the militant working-class districts of Newcastle, the South Coast and Lithgow.

Another group of CPA members planned to immobilise trains and dynamite the Hawkesbury railway tunnel to prevent “scab” coal from reaching Sydney. According to the Newcastle CPA district’s then-secretary,  a member of the central committee secretariat, J.C. Henry, had advocated this action on the grounds that it would concentrate the class struggle.

A former Communist recalled of party planning that during a tense point in the coal strike “some of the gunmen associated with the waterfront were called in”. [x]

As late as 1961, Ted Hill, then Victorian State CPA secretary, was still arguing that “the party should start preparing for armed struggle, and should commence training people for it" according to his colleague Bernie Taft.[xi]

Menzies first “Alien” mobilization alert went out on March 2, 1951, with the army advised to ready “all troops practicable” for action on March 6.[xii] The press, unaware of Alien, merely reported that large numbers of troops appeared to be massing for the waterfront. The wharfies and miners, intimidated, called off their stoppages a few days later.

The re-elected Menzies government on May 25 again signaled the military to activate the Alien plans, this time in response to industrial stoppages in solidarity with NZ unionists.[xiii] Troops worked affected ports and the government threatened to deregister the Waterside Workers Federation, leading to WWF capitulation by June 12.

Alien came into further operation sporadically in the next few years, including an airlift by Skymasters and other commandeered aircraft of 220 armed troops to Bowen for sugar loading in late 1953.[xiv]

Menzies terminated Alien in October, 1955, ending what Les Louis describes as an extraordinary period of troops being readied and used against unionists in strategic industries.

That is not quite the end of the story. Fossicking in the archives, Louis came across the Menzies government’s detailed planning for detention of Communists and fellow-travellers in the event of war. Louis’ article is provocatively titled, “Pig Iron Bob finds a further use for scrap iron: barbed wire for his cold war concentration camps”.[xv]

Leftists had always claimed Menzies wanted to silence them by concentrating them in camps, while officialdom decried such talk as ludicrous fiction. But the Lefties weren’t wrong, as Les Louis discovered during years of pestering ASIO for early documents.[xvi] Technically, internment needed to be preceded by some sort of declaration of war and activation of the Commonwealth War Book, but Louis believes the government and ASIO would have struck pre-emptively.[xvii]

From July, 1950, ASIO head Colonel Spry embarked on urgent compilation of internment lists, and by December already had an interim list of “750 selected Communists” whose detention “would render the Party organization innocuous” while the remaining enemies of the people were rounded up. By August, 1951, the list had grown to 1100 suspected party officials.

Arrests were to be by State police, and detainees handed over to the Army, which would run and guard the camps. WA and NT Reds would be transferred to SA camps, and Tasmanians to Victoria. 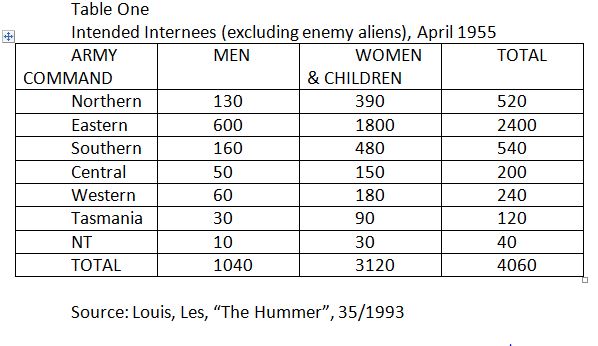 Criteria for detention included membership of the party’s central committee; state committees; metropolitan district committees; branch officials; and “Communist paid journalists, organisers and other activists”. Then there was prominence in the Eureka Youth League (did ASIO overlook the Junior Eureka Youth League, of which I was a member and inefficient goalie in Perth’s JEYL soccer team?). The list  also included Communists in suspect organisations, such as the Australia Peace Council, New Housewives’ Association and New Theatre League.

We then move on to detention of Communist trade union officials, ditto “disrupters of industry”, those in significant public service jobs and government science bodies, those in firms doing secret government work and those likely to be spying and sabotaging things.

A different category were enemy aliens (with a special category for “Asiatics”), who were aged 16-65 and associated with Soviet states, China, the east European bloc, and curiously, Finland. This involved, according to Louis, “two trusted immigration officials” in each State winnowing their files for ASIO’s benefit.

The main safeguards were (assuming use of the WW11 template) that Ministerial approval of an ASIO brief was needed in each case, along with an appeal tribunal. “This involved ASIO in mountains of paperwork,” Louis concluded, given that at April, 1955, there were 1040 Reds listed along with their 3120 women and children (Table One, above), along with 12,500 enemy aliens. By 1960 the total listees (including enemy aliens) had declined from 16,630 to a mere 1436.

Louis was unable to tell me what constituted “a war” (the Korean War, for example, was a “police action” or “peace enforcement mission”). “It was all I could do just to get the official figures,” he confesses.

David McKnight published his book, Australia’s Spies and their Secrets, a year after Louis’ article.[xviii] McKnight found that detention planning continued at least until the early 1970s.

Children were to be detained with their detained parents, although by 1956 ASIO became aware that this contravened the Geneva Convention. The “lists” were so sensitive that ASIO’s Spry wanted them disclosed not to cabinet but only four top ministers.

McKnight also found that in 1960, the military and ASIO were speculating about internment policy for “a limited war” involving Vietnam or China – our Vietnam “war” got going five years later. He also says that ASIO almost drowned for a decade in the paperwork required for briefs on each individual – especially as ASIO made 16 copies of each person’s brief.

Even the Communist Party wildly underestimated the detention planning, imagining it might involve detaining on Flinders Island a mere dozen leading Communists, rather than a thousand encamped in all States.

McKnight concludes: “Ultimately the problem was that in law, it was not a crime to be a Communist nor to espouse ‘subversive’ ideas. ASIO just acted as if it was.”

[xvi] He found many important documents of the Victorian branch of the archives stored in a broken-down laundry and reading room in Brighton, Vic.