The other day, sociologist and philosopher Frank Furedi was woken by a call from a journalist seeking comment  on “unacceptable values” in the Tom & Jerry cartoon series. Hungarian-born Furedi told a gathering of 120 at the Institute of Public Affairs in Melbourne on October 6 that he thought at first the call must be a practical joke.

But no, it was anything but. The reporter explained that Amazon.com has put a disclaimer on copies of the classic comedy videos it is selling — a warning that the cartoons exhibit “ethnic and racial prejudice” which was “wrong then and are wrong today”.

Furedi is the author of 17 books, including Wasted: Why Education Isn’t Educating, plus other titles  on free speech in the West. He spoke at the IPA with Nick Cater, executive director  of the Menzies Research Centre. When the time came for questions, Furedi was asked to compare current Western censorship with that of Communist-era Hungary, where he spent his childhood. Stalinist censorship was easier to deal with, he replied, because everyone knew the score and could see through the official lies. 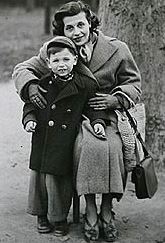 “My dad just told me, when I was eight, ‘Whatever you hear, don’t believe it’,”  recalled Furedi, shown at left with mum Klara. “Most of us knew right from wrong. But today censorship is driven by powerful and insidious cultural forces for self-censorship, for self-denial. In the UK, the classic example is the Rotherham child-abuse scandal, where many knew but none had the courage to denounce ethnic men destroying a generation of children.”

Asked about his political journey away from the far Left, Furedi recalled being raised in a high Stalinist period, when his father was imprisoned. After his release, and before the family migrated to Canada, his dad committed himself to getting rid of the Stalinists and took part in the 1956 revolution.  The message instilled in the young Furedi was simple, ‘Never trust the State’.

Furedi’s memories of Canada in the 1960s are of having a nice time as a member of the Far Left — until he realized his red-raggin’ pals had no problem with state interventions in people’s lives. They couldn’t handle the notion that democracy and freedom are non-negotiable.

In his speech, Furedi  gave another instance of self-censorship: a London play was cancelled because, despite being a theatrical production inspired by anti-racism, it included a black person in a cage. This politically correct censorship made no headlines, he noted, being marked only by the silence of embarrassed leftists staring at their shoelaces.

Nick Cater added the observation that, just a generation ago, the Left campaigned for freedom of expression during the Oz trials in London, and closer to home for the freedom to take one’s clothes off in movies like Alvin Purple. Those campaigners had turned full circle to become replicants of the censorious and humourless elite they once excoriated.

Furedi asked, “How long before TV and books also go in for their own soft and quiet censorship? It assumes we are children to be protected. As with your Section 18c law, it assumes that if someone says something insulting to me, I will pee my pants. This idea of people being weak and vulnerable is an invitation to the State to come in and hold our hands, saying, ‘We, the State, are here to support you’.”

The West – especially academia – is now beset with speech codes, like the ever-expanding definitions of what constitutes  “workplace bullying”, and the Left has armed itself with the weapon of sanctions to be used against those judged to be inflicting “hate”, or merely “inappropriate” views and speech, on others. “An editor told me I couldn’t use the word ‘brainwashing’ because it could offend epileptics,” Furedi laughed, before urging resistance. “We need to gift ourselves some courage and, instead of looking the other way, ridicule these attempts to regulate our personal lives.”

Nick Cater lamented that even conservatives are becoming selective about how far freedom of speech should reach, thus ceding the moral high ground by diluting and compromising what should be an absolute and sacred principle. Section 18c, he noted, had been on the books for almost 16 years, during which time it was used against Holocaust deniers. There were few objections, however, until the statute was used against Andrew Bolt in  2011.

Furedi even defended the right of jihadists to preach their hate, since they were better dealt with by trenchant debate than by gagging their critics. There are laws, anyway, about threats to the person, so further refinements and additions to the law in regard to “hate speech” are superfluous.

Academics in particular were averse to engaging Muslim radicals in free, open and unfettered debate, he said, citing a woman who had argued that Dutch anti-Islamist Geert Wilders should be silenced because he was so eloquent and persuasive. He told the woman to learn the art of public speaking. Furedi also recalled a recent visit to Poland, where he argued against State restrictions on on free speech. Many in his audience were amazed, he said, to hear him say openly what they had been thinking but were afraid to utter.

Another question sought Furedi’s opinion of the female police superintendent who attended a recent Rotary breakfast in Melbourne in civilian dress after an official edict announced that being seen in uniform on the street might incite radical Muslims to opportunistic violence. There was nothing new or surprising about that attitude, he sighed, nor did it signify a particularly Australian species of cowardice. In the UK, soldiers have been similarly discouraged from wearing their uniforms after the murder of Guardsman Lee Rigby.

“Why should those soldiers go to Afghanistan or Iraq to fight for human rights when they come home to be treated like second-class citizens?” he asked. “Even wounded soldiers in Birmingham hospitals have been given a hard time by Muslim doctors and nurses saying ‘This is a bad thing you have done’. People are embarrassed to talk about these dark little secrets. If I were a soldier I wouldn’t shut up about it.”

Furedi said moral compasses were becoming blurred. He knew a priest who was more proud of a degree in welfare counseling than his theological studies. Moralising was replacing morality, with parliamentarians taking their cues from focus groups and polling data, rather than conviction. It was the green parties in the West that led the field in using a subverted morality to promote their causes, such as the campaigns against McDonalds and the dubious concept that recycling is virtuous in and of itself.

Family First Senator Bob Day, thanking Furedi and Cater, used the analogy of a stonemason striking repeatedly at a block of granite to describe the need for perseverance and endurance in the ongoing fight to defend free speech: after 100 fruitless blows, the 101st strike of the hammer split the block. In Parliament, he said, several senators, including Liberals Dean Smith  and Cory Bernardi, who had added their own blows to the granite by supporting the need to delete ‘offend and insult” from Section 18c.”

It will take many more blows than that, along with many more hammers, to dislodge politically thinking from public fora.

The Name of the Beast