What Canada Can Teach Us About ‘Pretendians’ 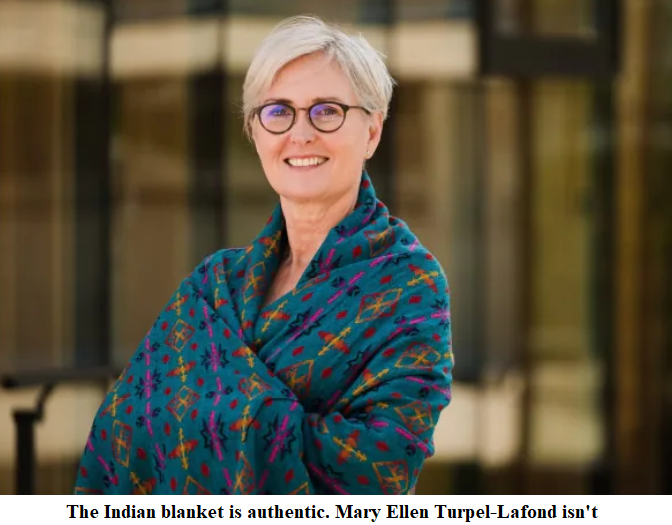 One person who is not on the membership roll is Professor Mary Ellen Turpel-Lafond, JD, OC, KC (disputed), holder of a dozen or so honorary doctorates (no one is quite sure), and until recently the academic director of the Indian Residential School History and Dialogue Centre at the University of British Columbia.

Much like a certain prominent professor of indigenous agriculture at the University of Melbourne, Turpel-Lafond traded on her claimed indigenous ancestry to become one of Canada’s most-lauded public intellectuals. But when her father’s birth certificate proved beyond any reasonable doubt that she had no actual indigenous ancestry, the Canadian intellectual establishment turned against her and her career fell apart.

This, despite the fact that she is a bona fide indigenous woman by marriage, accepted by her husband’s Muskeg Lake First Nation as a member of their tribe, in a country where indigenous status is by law granted to the non-indigenous wives of indigenous men.

Canada’s ‘First Nations’ are a tough bunch, and they guard their rights jealously. They have not hesitated to call out ‘predendians’ (pretend Indians) who “engage in colonial violence by stealing Indigenous identity from a place of privilege”. But the Indigenous Women’s Collective behind this condemnation aren’t so much angry with Turpel-Lafond as with the mainstream Canadian institutions that have honored and employed her. They are angry that white Canada has turned to Turpel-Lafond as its preferred indigenous voice.

Indigenous Canadians are fortunate to have democratic institutions through which to express themselves: the First Nations tribes. These organisations offer truly authentic, much more legitimate alternatives to the narrow class of privileged intellectuals chosen by mainstream institutions to be the compliant spokespeople for indigenous opinion. As the Turpel-Lafond controversy shows, it’s still difficult for real Canadian First Nations to have a say on indigenous matters. But at least they’re able to create a controversy.

IN AUSTRALIA the dominance of the professional indigenes is near-absolute—and the current proposal for an appointed (anointed?) Voice to Parliament will make it completely absolute. In one of the great ironies of indigenous affairs, ordinary Aboriginal and Torres Strait Islanders were not consulted on the proposal to create a Voice to Parliament and (by all accounts) will not be consulted on its structure or membership. They will be ‘gifted’ a Voice, not given a voice.

Tellingly, where indigenous Australians do have organised democratic institutions, there has been pushback. In South Australia, most of the state’s native title bodies have protested the creation of a state-level First Nations Voice that is not based on existing indigenous native title bodies. The New South Wales Indigenous Land Council has expressed similar concerns about the proposed national Voice to Parliament.

Troublingly, few people seem to care what these actually existing indigenous voices have to say about ‘the’ Voice. Their parliamentary submissions have gone unaddressed. Their leaders are not sought out for comment by the country’s major newspapers. Their opinions on indigenous matters don’t seem to matter. The land councils—for all their faults, the only democratically organised indigenous representative bodies in Australia—have essentially been ignored in Australia’s ‘Voice’ debates.

The Liberal and Labor parties have both had a crack at the indigenous Voice, and both have proposed mechanisms that involve the appointment of privileged intellectuals to speak to Parliament. Both have, in essence, offered sit-down money to the indigenous rights industry to get them off their backs. Whether Constitutional or merely legislative, no such ‘pretendian’ Voice will ever bring reconciliation to Australia.

6 thoughts on “What Canada Can Teach Us About ‘Pretendians’”

No Wonder They Won’t Detail How the Voice Will Work