A Discordant Voice in a Culture of Consensus 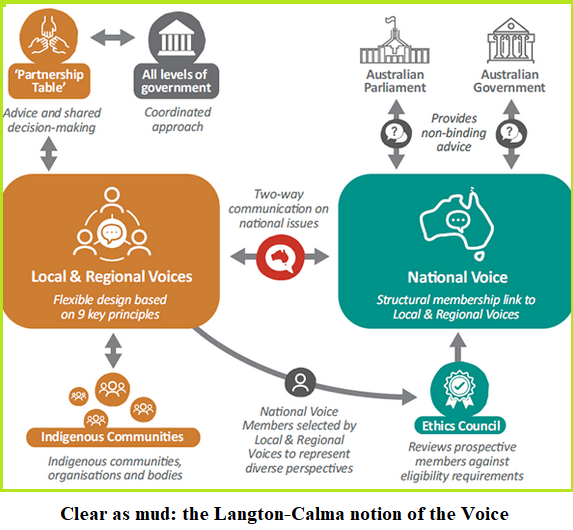 In his recent Quadrant Online column, Peter Smith writes how “the Voice, if it gets up, will not be an elected body in the sense in which we usually define elected bodies on the national political stage. To wit, bodies elected by voters through a secret ballot. The Calma-Langton report envisages an abbreviated bottom-up process  … from which twenty-four members will be appointed to the constitutionally-enshrined national Voice. It’s an appointment process.”

Representative decision-making by a majority vote of elected representatives is integral to Western governance processes. Persons in positions of leadership are generally accepted as having authority to make decisions binding on all, though many may not agree with those decisions.

Langton and Calma have designed their appointment process because they are no doubt well aware that the familiar Western model of majority decision-making under an elected leader is not acceptable in Aboriginal culture. What this culture demands is dealt with in the Indigenous Governance Toolkit. This is a resource developed by The Centre for Aboriginal Economic Policy Research  at ANU with a forward by Mick Dodson. Fundamentally, as he explains, Aboriginal culture requires decisions of the relevant group to be by consensus:

The Aboriginal and Torres Strait Islander approach to decision making is one of consensus and occurs across the layers of networks. Consensus is created through slow agreement and can change over time….

Only the relevant group can be involved:

Problems can arise for a group’s governance when the ‘wrong’ people or layer of a network is involved in making decisions or when factional interests undermine group consensus.

Warren Mundine has explained this concept in this way:

Here’s where Voice advocates are ignorant of (or deliberately ignoring) Aboriginal cultures. No Aboriginal person can speak for another country, only their own. Where’s the proposal for a constitutional voice for the Bundjalung people (my country on my father’s side) or the Gumbaynggirr or Yuin people (my countries on my mother’s side)?

The Voice won’t, and can’t, represent Indigenous people as a group.

The Aboriginal idea of leadership differs too from that of the Western concept:

There are strong culturally-based rules and values that stress the need for leaders to only speak on behalf of (i.e. to represent) the ‘right’ people (their own mob or land-owning group), about the ‘right’ issue (i.e. their own country and own business).

The strongest expectation then is that a leader should, first and foremost, ‘look after’ and be accountable to their own family and local group.

Leaders are also expected to go back to their fellow group members to discuss information, ideas and decisions with them. …Leaders should also act on the basis of consensus.

Achieving the consensus that alone gives authority to decision-making in Aboriginal culture inevitably takes time, often a lot of time.

Just how difficult it is to procure consensus within a single small indigenous group is illustrated by the 16-year history of the Quandamooka claim to native title over North Stradbroke Island. The claimant group was small, only 12 families. The claim was lodged in 1995. By 2000, all parties – the claimant group, the Queensland government, the local council, the sand miner and the island’s white residents — were in agreement. But a planned consent determination of native title was derailed when one of the 12 families withdrew its agreement. It took another 10 years for all to finally agree. See the HEROC Native Title Report 2011 pp 107-110:

Since the first native title claimant application was lodged by the Quandamooka Peoples in 1995, the process of resolving their native title required the claim group to decide who are the people in the native title claim group, who are the person or people that are the applicant, and negotiate with multiple parties about their native title rights and interests over North Stradbroke Island and some of the surrounding islands and waters of Morton Bay. The intense pressure on the community from these processes [to select who should be the applicant] resulted in the Quandamooka peoples declining a native title settlement offer from the Queensland Government almost ten years ago.

The notion of Langton and Calma that 24 peak representatives will have the support of all indigenous peoples for whom they profess to speak is absurd. The Langton-Calma model is in truth designed to vest the power of the Voice in a small group of mostly metropolitan activists. A decision-making process that actually respected Aboriginal culture would be simply unworkable.

It’s no wonder that Prime Minister Albanese will not commit to any details about how the Voice speakers will be selected or how the Voice will work. Everywhere you look, major difficulties loom.

And if the High Court doesn’t do what so many Voice urgers and advocates confidently expect — if instead, it refuses to interpret the Voice provision in the Constitution in accordance with how Parliament in its Voice details statute tells it to and makes up its own mind on what the Constitution means — what then?

Either total paralysis of both Parliament and the executive government until the court decides or capitulation to Voice blackmail to get the machinery of government moving again.

From 1981 to 1992, Douglas Drummond was Queensland’s Special Prosecutor following the Fitzgerald Inquiry, and subsequently a judge on the Federal Court of Australia, from which he retired in 2003. He wrote most recently for Quadrant of the politicised disgrace that is Victoria Police

5 thoughts on “A Discordant Voice in a Culture of Consensus”

Sticking it to the Voice and its Promoters

A Shapeshifting Creature Inside the Constitution

The Voice: Be Careful What You Wish For