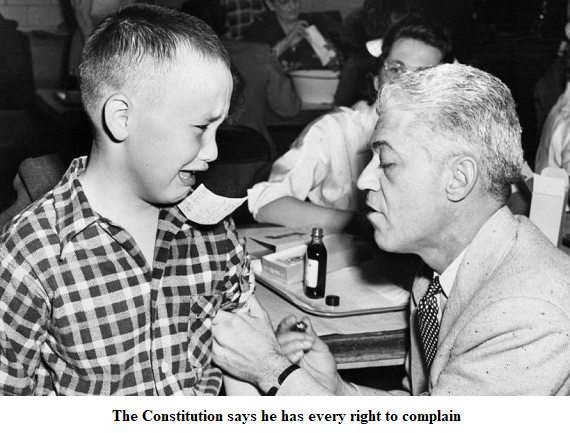 One of the most remarkable characteristics of the Australian Constitution is its express limitation on governmental powers. In drafting the Constitution, the framers sought to design an instrument of government intended to distribute and limit the powers of the State. This distribution and limitation upon governmental powers was deliberately chosen because of the proper understanding that unrestrained power is always inimical to the achievement of human freedom and happiness. As such, the Constitution allocates the areas of legislative power to the Commonwealth primarily in sections 51 and 52, with these powers being variously exclusive or concurrent with the Australian States.

The Constitution was slightly amended in 1946 by a referendum in order to include section 51 (xxiiiA). This provision determines that the Parliament, inter alia, can make laws with respect to:

The provision of … pharmaceutical, sickness and hospital benefits, medical and dental services (but not so as to authorise any form of civil conscription) benefits to students and family allowances…

As can be seen, this provision allows for the granting of various services by the federal government but not to the extent of authorising any form of civil conscription. The prohibition of such conscription is directed particularly to the provision of medical services.[1]

In other words, no Australian government, either federal or state, or those acting on its behalf, is constitutionally authorised to force any individual to take medicament against his or her own will, or force them or their children to be, among other things, compulsorily vaccinated.

The concept of ‘civil conscription’ was first considered by the High Court in British Medical Association v Commonwealth (1949) 79 CLR 201; [1949] HCA 44 (7 October 1949). That case involved federal legislation which required medical practitioners to comply with a particular federal medical determination as part of a scheme to provide pharmaceutical benefits.

In other words, that case was about the validity of legislation which compelled medical practitioners to render a particularly medical-pharmaceutical service.  In his written judgement Justice Williams stated (emphasis added):

Accordingly, in my opinion, the expression invalidates all legislation which compels medical practitioners or dentists to provide any form of medical service” (emphasis ours). [2]

Of course, a doctor who freely performs his or her medical service does not create conscription. However, as Justice Webb explicitly mentioned:

When Parliament comes between patient and doctor and makes the lawful continuance of their relationship as such depend upon a condition, enforceable by fine, that the doctor shall render the patient a special service, unless that service is waived by the patient, it creates a situation that amounts to a form of civil conscription.[4]

That important decision confirmed the fundamental right of Australian citizens to determine by their own will whether they should take any medical or pharmaceutical benefit provided. Accordingly, any legislation that requires medical practitioners to prescribe government-mandated medical services constitutes a form of civil conscription that is constitutionally invalid.

In this sense, Chief Justice Latham argued in the British Medical Association case that civil conscription would include not only legal compulsion to engage in particular conduct but also the imposition by government of a medical duty to perform a service in any particular way.[5] Constitutional limits on legislation which does not acknowledge this important guarantee were more recently acknowledged in Wong v Commonwealth; Selim v Professional Services Review Committee . In this particular ruling the High Court restricted the capacity of both federal and state governments to implement mandatory vaccination, even recommendations from the National Health directives for either federal or state governments.

Of course, in the PSR case the Court was simply following precedent as per the previous 1949 decision which had already clarified the issue. Accordingly, Chief Justice French and Justice Gummow held that civil conscription is a ‘compulsion or coercion in the legal and practical sense, to carry out work or provide [medical] services’.[6]

Importantly, the High Court also indicated that the prohibition of civil conscription must be construed widely, to invalidate any law requiring medical practitioners (expressly or by practical compulsion) to work for the Commonwealth government or any Australian State. Simply put, no law in this country can compel any medical service on behalf of the Australian government.

As can be seen, section 51 (xxiiiA) maintains the prohibition of vaccination through any form of government-run health service, indicating that vaccination should only be through voluntary means in accordance with the free communications between medical doctor and patient, which is essential to achieve a high-quality healthcare.

To conclude: the Australian Constitution explicitly prohibits any form of legal compulsion upon the medical profession to carry out any form of medication, including vaccination. In fact, no government, either federal or state, can impose compulsory vaccination in this country, or prevent medical practitioners from remaining entirely free to choose whether or not to provide certain medical services, including vaccination.

Dr Augusto Zimmermann is Professor and Head of Law at Sheridan Institute of Higher Education, and Professor of Law (Adjunct) at the University of Notre Dame Australia, Sydney campus.  Dr Zimmermann was chair and professor of constitutional law at Murdoch University from 2007 to 2017. He is also a former Law Reform Commissioner in WA (2012-2017) and President of the Western Australian Legal Theory Association (WALTA).

The Closed Trials of George Pell

Rule of Law vs the ‘Law’ of Rules