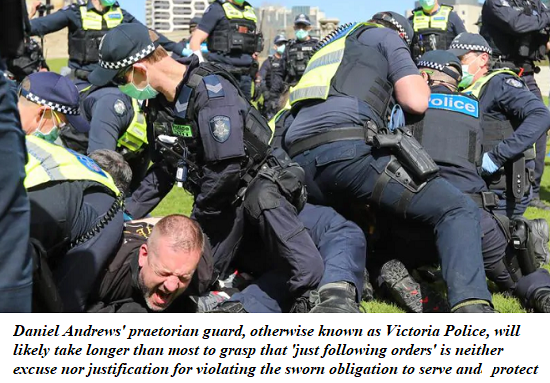 More than a million workers in Western Australia (WA) have now been mandated to receive their third COVID-19 vaccination. Those who refuse to comply with the executive order will have their jobs summarily terminated. They will lose their incomes and, as such, their capacity to provide for their families.[1]

If that wasn’t bad enough, now the unvaccinated are forbidden even to have a drink at a pub. “Not being [double] vaccinated means you will miss out,” communicates new WA Health Minister Amber-Jade Sanderson. As she menacingly declared:

If a patron attempts to sneak into a venue … they will face an on-the-spot fine or, possibly, imprisonment. The venue also has an obligation to take reasonable steps to ensure all patrons and staff entering the premises are double-dose vaccinated.[2]

Perhaps a few words about Ms Sanderson might be helpful, first elected at the 2013 state election. She holds no more than a BA in journalism and was a trade unionist before entering politics. After the 2021 election, Ms Sanderson was appointed to head the newly created Ministry of Climate Action. As can be seen, Ms Sanderson has no medical qualification and appears utterly unqualified for the health portfolio. As for her level of appreciation for human life, she has a troubled history of supporting abortion on demand and censoring offers of assistance to mothers in distress, according to Mr Darryl Budge, who is President of The Coalition for the Defence of Human Life. “Amber-Jade Sanderson MLA has ordered the WA Health Department to delete pregnancy assistance groups like Abortion Grief Australia from the ‘Contacts’ section in three pregnancy-related Health Department brochures, even though the group employs qualified counsellors,” Mr Budge says.

According to Mr Budge, “Ms Sanderson excused her discriminatory rejection of these three pregnancy-assistance services in Parliament on November 10, 2021, by saying they were ‘religious’ and ‘outdated’.”[3]  What is more, Ms Sanderson is a strong advocate for assisted suicide. She has “received praise” from Premier Mark McGowan for her “decisive role in delivering WA’s Voluntary Assisted Dying laws”.[4] As stated in her own official website,

So much for a concern for human life. Be that as it may, the COVID-19 mandates in Western Australia amount to an intolerable violation of fundamental legal rights. They are a confirmation of the remarkable shift of power from the legislative to the executive, which basically allows the WA Premier and his cabinet to arbitrarily decide on executive measures that intervene on every single aspect of our lives. Such a concentration of power in the hands of a few politicians paves the way for what has been traditionally described as tyranny. A tyrant is defined as the authority who assaults the property and freedoms of the citizen, and violates the Constitution. Of course, this is precisely what happens in “crisis” situations such as this ‘COVID emergency’, when the government has claimed an “emergency power” to control every aspect of our lives.

As we observe what has happened, and continues to happen, across Australia, it is important to consider how tyrannical regimes are so often brought into existence. There is always an ‘emergency’ that can be used to justify further concentration of powers and the violation of basic human rights. In Law, Legislation and Liberty (1981), Nobel laureate Friedrich Hayek commented that emergency powers always have their way of becoming permanent. Hayek thus offered this sobering reflection:

The conditions under which such emergency powers may be granted without creating the danger that they will be retained when the absolute necessity has passed are among the most difficult and important points a constitution must decide on. ‘Emergencies’ have always been the pretext on which the safeguards of individual liberty have been eroded – and once they are suspended it is not difficult for anyone who has assumed such emergency powers to see to it that the emergency will persist.[6]

The State Emergency Coordinator in Western Australia is Police Commissioner Chris Dawson. He has also been appointed by the WA government as the COVID-19 Vaccine Commander. As the Vaccine Commander, he leads and drive the state’s COVID-19 measures that effectively violate the most basic rights of the individual, including bodily autonomy and the right to keep one’s job and earn a living.

The use of the word ‘commander’ is especially telling, suggesting the intention of the WA government has been to declare war, in effect, on its own people. After all, if we are to accept the Cambridge Dictionary’s definition, the word “commander” is “an officer who is in charge of a military operation”.[7]  By appointing the Police Commissioner as its Vaccine Commander, the WA government has effectively declared those who dare to defy its arbitrary vaccination measures are the enemy and to be dealt with as such.  The vaccine commander role in WA mirrors similar appointments around the country, including the federal government making Australian Army Lieutenant General John Frewen the coordinator of the National Vaccine Taskforce.[8]

In July last year, NSW Police Commissioner Mick Fuller requested military personnel to “boost the operational footprint” of the police and to assist with COVID-19 restriction compliance measures. “I would absolutely have the confidence in expanding the Australian Defence Force in NSW,” he said.[9]  The military contingent was called to keep citizens in ‘house orders’ [house arrest], and ensuring adherence to ‘obligatory isolation’. Calling on the army to enforce lockdown rules sets an incredibly dangerous precedent. It is certainly not constitutional to entrust military personnel with ostentatious police activities. This is a gross deviation from the military’s primary role, which is protecting the nation from external enemies, not protecting an elected government from the public.

John Locke argued that governments have no other end ‘but the preservation of these rights, and therefore can never have a right to destroy, enslave, or designedly to impoverish the subjects’. If a government exceeds the limits of its legitimate power, citizens have the fundamental right to resist. As Locke famously put it:

Whenever the legislators endeavour to take away and destroy the rights of the people, or to reduce them to slavery under arbitrary power, they put themselves into a state of war with the people, who are thereupon absolved from any further obedience, and are left to the common refuge which God hath provided for all men against force and violence.[10]

Locke was the author of the first systematic exposition and defence of classical liberalism. He argued in his Second Treatise (1689) that our basic rights to life, liberty and property are unalienable. They are not concessions of the State and we cannot voluntarily renounce them and become slaves. By implication, we are obligated to defend these basic rights against any threats to them. In this context, as laid out in the doctrine of the “lesser magistrate”, the option to resist falls within the important tradition of lawful resistance to arbitrary government. First detailed in the Magdeburg Confession of 1550, this doctrine teaches us that when a civil authority (i.e., a “higher magistrate”) has become an incorrigible tyrant, he has objectively abdicated his claim to legitimacy.

Consequently, the magistrates with lesser authority under him may defy and resist. For example, WA Police’s officers are lesser magistrates who have a lawful duty to protect the basic rights of every citizen, not to mindlessly follow the arbitrary commands of the State. If such an unjust order is given to these officers by their superiors, they have a fundamental obligation to refuse obedience to that order.

As for the military participation in the undermining of basic human rights by the Australian governments, the Anderson Trial of 1865 in the US made it patently clear that a subordinate military officer should not use ‘I was just following the orders of my superiors’ as a defence for carrying out an unjust command. The Nuremberg Trials of 1945-1946 made this standard patently clear to all the world.

Even when the lower magistrate disobeys the unjust commands of the State, they benefit those in superior authority because, due to their disobedience such authorities are confronted with the reality of their unlawful measures. Their disobedience gives these erratic authorities an opportunity to recover themselves, and turn from their unjust deeds. Above all, the notion that lesser magistrates must enforce orders, regardless of how abusive, unjust, or unconstitutional they are, is dangerously destructive to the rule of law. People working in the government are not to be mere machines for an all-powerful State. They are human beings and they have consciences.

St Thomas Aquinas once argued that an unjust law is not a law at all. Of course, when the lesser magistrates interpose against unjust laws, there will be a fight. Their reputations will be maligned, and they could end up imprisoned or abused in some fashion by the higher authority. Above all, civil authorities bent on tyranny never want to recognise the legitimate authority of lesser magistrates, especially when they are occupied in imposing arbitrary measures, as our governments are doing in our day.

Furthermore, it is reasonable to expect that the vast majority of lesser magistrates will compromise their moral character in order to avoid conflict, thinking mostly of their own self interest. Some may make a squabble, but will eventually conform once the courts rule against them. Others, of course, will refuse to resist tyranny because of concern for their own personal safety. In this context, the role of the people is to rally behind lesser magistrates when they take a stand. These magistrates often will not act until the people plead their case, and they are entirely assured of our unconditional support.

Be that as it may, the interposition of the lesser magistrate in the ongoing struggle for our rights and freedoms is absolutely critical for the preservation of constitutional government. The hour for them to stand is upon us the citizens of Australia.

Augusto Zimmermann LLB, LLM cum laude, PhD, CIArb, DipEd, is Professor and Head of Law at Sheridan Institute of Higher Education in Perth, WA. He is also Adjunct Professor of Law at the University of Notre Dame Australia, Sydney campus. From 2012 to 2017, he served as a Law Reform Commissioner in Western Australia. While teaching legal theory and constitutional law at Murdoch University, Professor Zimmermann was awarded the 2012 Vice Chancellor’s Award for Excellence in Research, as well as two Law School Dean’s Research Awards, in 2010 and 2011. He is the author of numerous academic articles on the Rule of Law, contributing, inter alia, for a book edited by the President of the American Bar Association entitled The Legal Doctrines of the Rule of Law and the Legal State (Rechtsstaat), Springer, 2014. Professor Zimmermann is also the co-editor of Fundamental Rights in the Age of Covid-19 (Connor Court Publishing, 2021)

Lessons from the Totalitarian Past