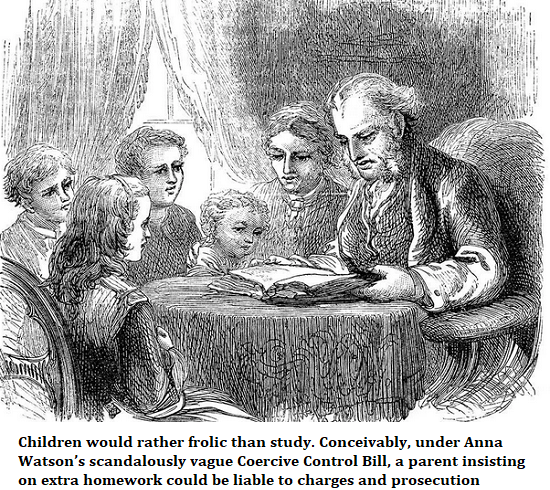 NSW Labor MP Anna Watson’s Coercive Control Bill would make criminals of us all, unless we can prove our behaviour was reasonable in the circumstances.  It is walking-on-eggshells legislation. If the Bill is passed, it could become quite common that, as in Kafka’s novel The Trial,

Someone must have slandered Joseph K, for one morning, without having done anything truly wrong, he was arrested.

Interpersonal violence is already illegal. The point of this Coercive Control Bill can only be to tackle controlling behaviours that do not involve violence in domestic relationships.[i] Verbal and emotional abuse. Sustained bouts of rage, interrogation and wild accusations that erupt from pathological jealousy and anxiety. Endless narcissistic devaluation, dehumanisation, gaslighting, guilt-tripping, and scapegoating. Threats to leave, of suicide, of violence, or of other punishments. These kinds of abusive behaviours in a relationship may leave no visible scars but can result in significant and lasting suffering and trauma. It is understandable that Anna Watson wants to do something about this, but her Bill is extremely problematic and should be rejected outright. I make these comments as a citizen reading the proposed legislation and considering its implications.

The Bill covers a wide range of relationships well beyond what many of us might understand by the term ‘domestic relationship’ – generally taken to mean someone you are now living with under the same roof.[ii]  For example, though you may not even know them, you technically have a domestic relationship with your lover’s former lovers. And they do with yours.

The offence of coercive control is poorly specified. It uses terms that are vague, in that they are broad in scope and wide in range, from trivial to severe. Terms, for example, like ‘monitoring’, ‘restricting’, and ‘limiting’. What kinds of monitoring, limiting, or restricting? How much, and for what purpose? Some of the terms are highly subjective, such as ‘frightening’. Is the offence committed only when there is an intention to frighten? Or is it committed when someone feels frightened, regardless of the intention? What about practical jokes, pranks, and games, which can involve both the intention to frighten and the feeling of being frightened? Usually only a little bit, not for long, and hopefully with everyone laughing afterwards, including at their own fear. They are some of the ways we learn to deal with surprise, fear, and amuse each other at the same time.

Restricting another person’s freedom of action is criminalised. Yet all relationships involve compromise and limits on each other’s behaviours. What actual behaviour might be considered restrictive? When does asking someone to do, or not to do, something become a restriction on their freedom of action? Does the crime need to involve physical force, or the threat of it, or the imposition of a consequence if a request is not complied with? At what level or severity of consequence? Is the crime committed if the other person feels thwarted, doesn’t get their own way, or if they feel they can’t do whatever they like? The proposed legislation makes an offence of any attempt to set boundaries in a domestic relationship, subject only to the defence that it was reasonable under the particular circumstances. It is walking-on-eggshells legislation – almost anything is an offence, unless you can prove it was reasonable under the particular circumstances. And you had better have a record of them.

In those kinds of relationships, one person may be a psychologically functional adult and, typically, takes a degree of responsibility for the other person and monitors and regulates their activities and exercises a degree of control over them. Society in fact expects this of the psychologically functional adult. Yet the proposed legislation criminalises controlling, regulating or monitoring the other person’s day-to-day activities and criminalises behaviour that limits another person’s freedom of action, subject only to the defence of it being reasonable under the circumstances. The legislation does not appear to allow for the possibility that monitoring, regulation and control may be exercised in a loving way for a parenting, caring, or therapeutic purpose.

In any relationship, but particularly in a domestic relationship, the people involved have to get along with one another. This can involve actions that seek to limit another person’s behaviour. We don’t just let other people we live with do whatever they like. And they don’t just let us do whatever we like. We may ask each other to do things, or not to do things, and maybe there are consequences. This is particularly true of parent-child relationships. But also for adults. Consider, for example, a spouse who finds out their partner is having an affair. The spouse insists the affair must end, that the partner not see that person anymore, or divorce will be the consequence. The proposed coercive control legislation criminalises such behaviour by the spouse as it is seeking to limit another person’s freedom of action to continue the affair.

Society’s expectation is that parents socialise their children as they grow up, teaching and modelling good behaviour, and pointing out and correcting poor behaviour. Including, for example, violent behaviour such as sibling fighting. Parents are expected to control, regulate and monitor their children’s day-to-day activities. Parents are routinely asking their children to do this or telling them not to do that. Getting them ready for school on time, getting them wash their hands or clean their teeth, to take turns, to do their homework, and a myriad of other things — yet the proposed coercive control offence criminalises controlling, regulating, or monitoring another person’s day-to-day activities and criminalises limiting another person’s freedom of action.

What is a parent to do with one or more of their own children behaving badly? Call the police and prosecute? Or is the parent to rely on the defence that their behaviour to control their child was reasonable in the circumstances? In what circumstances is it reasonable to control, regulate, monitor, or limit your child’s behaviour? Actions many parents use would be criminalised. For example, sending a child to their room, grounding a teenager or confiscating their phone might be considered isolating them and punishing them – an offence under the proposed legislation. It is certainly limiting their freedom of action. As are insisting on a specific bedtime and limiting a child’s screen time.

We would all be criminals if this Bill becomes law. It criminalises a wide range of vaguely described behaviours that are widespread in our family and community lives, behaviours that are intrinsic to domestic relationships. If prosecuted, we are allowed the defence that our “conduct was reasonable under the particular circumstances”. Instead, the onus should be on the prosecution to prove that the action occurred and that it was unreasonably coercive and controlling under the particular circumstances.

Coercive control is almost invariably exercised in private, when the controller and their victim are alone and there are no witnesses. Verbal and emotional abuse leave no tangible corroborating evidence. Control actions involving violence are already crimes. It is likely that many, or nearly all, coercive control cases will involve only the competing testimonies of the participants. It will be difficult to secure criminal convictions. This, too, will tie up a lot of police and court resources.

Coercive controllers are almost invariably people with serious, chronic personality disorders like narcissistic personality disorder. Passing a law will not change or stop their dysfunctional behaviours. You cannot legislate a narcissist to respect others, or a pathologically jealous or paranoid person to trust others. Nor will it help the people whose misfortune it is to get into relationships with them. It is unlikely a victim of coercive control will accuse their controller until they have escaped. And it will give authorities a cover under which they could arrest virtually anyone at any time without them having done anything truly wrong. Like Kafka’s Joseph K, we may plead

“… there’s been a mistake. How is it even possible … to be guilty? We’re all human beings here, one like the other.” “That is true” said the priest “but that is how the guilty speak”.

Dr Michael Green has a PhD in Systems Engineering.

14 thoughts on “The ‘Coercive Control’ Bill vs Common Sense”