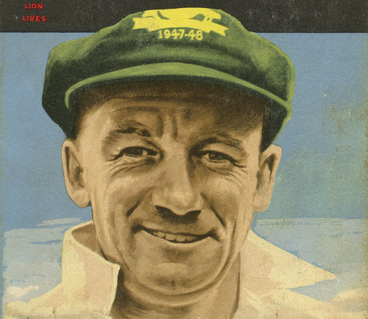 I have been reading The Incomparable Game by the wonderful England cricketer Colin Cowdrey, and in it he tells an amusing story about Don Bradman, commencing with observations made when the then 15-year-old Cowdrey was watching Bradman’s last innings, in 1948, at Lord’s:

As fast as any Englishman in that period of no fast bowlers was, I suppose, Bill Edrich. Sitting at Lord’s watching him on the occasion of Bradman’s last innings on the ground, I was filled with that sense of awe that comes to every schoolboy when he sees a bowler he considers fast enough to be fearsome. Edrich, aggressive, fit, terribly busy in his run up, made me think then that it would be impossible for me to play in his class of cricket. He would have been too fast for me and I would never have seen the ball. He frightened me to death just to watch him run up.

This respect was transferred fairly quickly once Bradman got to the wicket and began to compile what everyone said was a typical hundred. The sight of him that sticks in my memory is of his counter to an Edrich bouncer. I don’t know whether he picked up a message from the bowler’s run up, but he took two little skipping steps away from the stumps and with a horizontal bat lathered the ball down the wicket so that it pitched almost at Edrich’s feet on his follow through and caused him to shuffle out of the way like a dan­cer. Then the ball took off past the umpire like a Bobby Locke low wedge shot and bounced back off the sightscreen at the Nursery End.

That stroke has remained in my memory like a photograph. It tells me everything I want to know about Bradman.

I have only once seen a batsman in First Class cricket playing the “straight pull” — flat-batting a bouncer back at the bowler and endangering his and the umpire’s health. That was the great South African Barry Richards, then playing for South Australia against WA in the Sheffield Shield. Facing bowlers of the caliber and pace of Graham McKenzie and Dennis Lillee, Richards had four options with the short ball coming at his head, and he used them all. He could step away and cut it, flat bat it back past the bowler, pull it through mid-wicket or square leg, or hook it over fine leg. I had never seen such cool mastery.

But back to The Don. I never saw Bradman bat, but my impression from the cricket literature is that he was more an accumulator of runs than a master blaster.  He would effortlessly keep the scoreboard ticking over with ones, twos and threes. Until I read Colin Cowdrey’s book I had not realised that he was also a magnificent hooker when the occasion arose. Cowdrey goes on:

I know that when they say he murdered even the best fast bowlers with his hook that it was true. I know also that it must be true when they claim that he was the greatest hooker the game has known.

There is a story of Bradman’s hooking which is now listed in the history of Kent as another example of man’s inhumanity to man. The victim was Fred Ridgway, the county’s fast bowler who had never seen The Don bat.

So, at Canterbury in 1948, as Bradman [then aged 40] walked out to take guard, Godfrey Evans and Les Ames, two men whose combined knowledge of Bradman went back nearly twenty years, decided to give Fred some tactical advice.

“He’s got a reputation as a hooker,” said Evans, “but when you get to forty it’s a different business.” Turning to Ames he said: “You used to hook a bit, Les, didn’t you, but you had to give it away.” Ames nodded agreement.

“Give him a couple of good-length ones around the off-stump,” advised Evans, “and then give him the bouncer third ball. You’ll get him caught at short-leg.”

Ridgway gave the third ball everything. So did Bradman. It pitched among the hydrangeas in front of the Mayor’s enclosure, scattering the official party, skimmed past two waiters and bounced off the back wall of the tent.

I would have liked to have seen that.

I am reminded of a story my father once told me from his days as an international agricultural scientist. He was in his 30s at the time, at a meeting in India somewhere, and it was during the Bradman era.  A cricket match was arranged, as so often happened in India, no excuse being needed. My father was no batsman, but on the strength of his being an Australian, and therefore Bradman-like, he was selected, and not just to play, but to open the innings.

The opening bowler was “a huge bearded and turbaned Sikh” and his first ball was a searing bouncer that threatened to decapitate my father. He threw up his hands in self-protection, somehow the ball struck and glanced off the bat and then flew for a six over fine leg. There was rapturous applause from the outer. The second ball, my father said, he didn’t see at all, and it bowled him, “to his immense relief”.

I would have liked to see that as well.