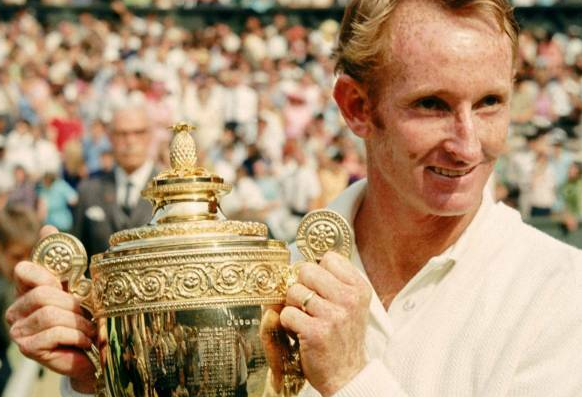 I have recently acquired a DVD of the BBC’s telecast of the 1969 Wimbledon men’s singles final. This was the classic match in which Rod “Rocket” Laver defeated John “Newk” Newcombe, thus securing the third rung of his second grand slam. The match is an absorbing study in tennis tactics and the flow and counter-flow of a match between two wonderful players at the very top of their game. It also provides a fascinating counterpoint to the modern game and today’s top players.

Expectations for the match were high. Both men were former Wimbledon champions, Laver winning as an amateur in 1961 and 1962, and Newcombe in the last year before Open tennis in 1967 (at a time when the world’s best, including Laver, Ken Rosewall, Lew Hoad and Pancho Gonzales were banned from Wimbledon because they were professionals). In 1969 Rod Laver was 31 years old, and Newcombe 25.

Conditions were prefect and the scene was a picture. Laver won the first set 6-4. Both played ‘standard’ (or these days, ‘old-fashioned’) serve and volley grass-court tennis, and there was just the one break of serve. But in the second set, Newcombe changed his tactics. He began to play soft little dinks and slow, sliced returns of serve, and he took Laver away from the net repeatedly with cunning lobs. Newk won the second set 7-5 and roared into the third, reaching 4-1 with his serve to come, and all the momentum on his side of the net. A Newcombe victory looked very much on the cards.

Then suddenly, as he was so uniquely capable, the Rocket lifted. He began to “read” Newcombe’s game, getting back early to the lobs and putting away his overheads, dinking back the dinks with deceptive angles, and hitting searing passing shots. He won the next six games in a row, taking the third set 6-4. He broke immediately in the first game of the fourth set, and then held on to take it 6-4, and with it, the championship. Newcombe was magnificent, brave and skilful to the end, but he knew he had failed to take the champ when he had him down and out, and you sensed this preyed on his mind for the rest of the match.

At the turning point in the match there was a famous rally. This is beautifully described in The Pros – the forgotten heroes of tennis, which includes quotations from Laver’s autobiography:

….it was now 4-2, with Newcombe still a service break ahead and serving. After Laver won the first point of the game for 0-15, a rally developed on the second.

‘Newcombe,’ says Laver, ‘belted a forehand crosscourt wide to my right. As I lunged for it, he pressed tight to the net ready to cut off anything [I could return]. He edged a bit to his left, figuring logically that if I got to the ball all I could do was try and slap it down the line. A down-the-line backhand is my favourite in that situation.’

But …although ‘everybody’ knew that his favourite shot was the down-the-line backhand, usually struck hard with topspin, he made up his mind ‘to go the other way’.

We catch him at this instant — behind, on a dead run, at the end of his reach, and at a key point in the final of a great championship. Then and there, the wizard unwraps his wand. He invents a stroke resembling a karate-chop and slices a low, softish crosscourt skimmer. The ball, invested with a life of its own and running almost parallel with the net, keeps ‘fluttering along’.

As if held on a string to the puppet-master’s hand, and eluding the efforts of Newcombe at the net, the mesmerising thing eventually drops – poof!  — an inch within the sideline.

Laver tells us he himself couldn’t believe the angle. Neither could  Newcombe.

From that point on, the result was never in doubt. (Highlights of the match are captured in the video embedded below.)

Years later I heard Newcombe remark on television: “When you played Rod Laver in a five-set match, you never knew when you were in deeper trouble – when you were two sets to love down or two sets to love up!” I have always enjoyed this insight into Laver’s magnificent sporting personality – he could win from in front or from behind, and did so, often.

Other things I loved about the match and its presentation:

♦ Almost continuous play, no delays for towelling down between points, no lingering choice of balls before serving or multiple ball bounces, no chairs to sit on at the change of ends, no repetitive, dumb and infuriating commercials. Just tennis.

♦ Fierce concentration from both players, but no theatrics. After a great shot or a break of serve, the players would simply turn and walk to the spot for the next point without punching the air, screaming with jubilation or carrying on like a pork chop. You could see them thinking, not about the shot they had just played but about the next point.

♦ No grunting, screeching or swearing.

♦ Not one single challenge of a line call, or any form of gamesmanship aimed at upsetting the opponent.

♦ Bowler-hatted linesmen who looked like (and probably were) retired Indian Army colonels.

♦ No distracting courtside advertising; nor did the camera dwell on celebrities in the crowd.

Watching Laver play, I was struck by many similarities to my favourite modern player, Roger Federer (and here I am referring to the Federer of ten years ago, rather than the wounded warrior of today). Not in physical appearance, but in tennis skills and smarts and court demeanour. Like Federer, Laver always seemed to play just well enough to win … until threatened. Then he ‘changed gear’ and took his game to a higher plane. The two men also have wonderful variety. For example, when thinking of Laver one tends to remember the rolled topspin backhand and whippy slashing forehand, but he hit lovely sliced shots, soft-angled volleys, and played both the offensive and defensive lob with beautiful deception. Both Federer and Laver (and Newcombe for that matter) exemplified “the all-court player” whose style has always been so attractive and so effective.

Also, like Federer, Laver never appeared to be in a hurry, in fact he seemed to play almost at a walk. Partly this is attributable to his being well inside the baseline, taking the ball on the rise or on the full, and firmly in control of most points, but it is also because of his acute anticipation, which seemed to allow him to cruise to the right spot almost before his opponent played the shot. Federer has a more powerful serve than Laver, but I’m not sure it is more effective, considering that Laver was a lefty; nor is it easy to compare the serve of a man using a 1960s wooden racquet with one using the super-technology carbon-fibre racquets of today. Laver’s serve was very deceptive, especially to the backhand court, and watching him serve from the vantage point of a television with play-back facility, I still could not pick which way his serve was going to go – way wide to Newcombe’s backhand, or ripping down the centre.

Finally, all these men played to win points, not to defend them. How refreshing this is, compared to that ultra-boring type of modern tennis, where both players are behind the baseline trading endless identical topspin groundstrokes and hoping the other will eventually make a mistake.

The only thing done better these days are the instant replays of great points from a different camera angle, which I really like (although it can be overdone). Otherwise, in terms of player skills, tactics and behaviour, the pace and variety of the game and television presentation, there is nothing about today’s tennis which compares favourably with that of 50 years ago.