The Bullock at the Popping Crease 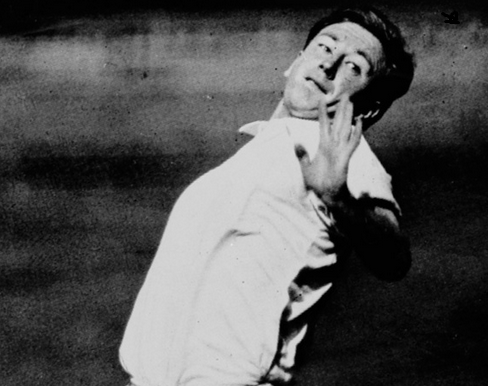 I heard former Australian cricket captain Kim Hughes on the radio the other day, talking about Graham “Garth” McKenzie. Hughes rates McKenzie as one of our greatest fast bowlers and regrets that memories of his achievements are now fading. However, some good news for McKenzie fans: he has been honoured as an “official legend” in the Western Australian Hall of Sporting Champions. Denis Lillee is the only other cricketer to achieve this honour.

McKenzie was a contemporary of mine, growing up in Perth’s western suburbs in the 1940s and 1950s.  Luckily for me I never faced him. I played tennis rather than cricket in my high school years, but I had friends who were cricketers, and some of them faced McKenzie. Interestingly he started his cricket career as an off-spinner, but it wasn’t long before he found he could bowl frighteningly fast. I remember one of my schoolboy mates telling me once about a junior district match between Nedlands, for whom my mate played, and Claremont-Cottesloe, for whom McKenzie was the spearhead. One of the Nedlands batsmen was dismissed by McKenzie, clean-bowled, but worse than that, the McKenzie ball actually shattered the middle stump.  The incoming new batsman was asked to carry out a replacement stump as he made his way to the middle. The demoralising effect of this, he later claimed, was the cause of his almost instantaneous return to the clubhouse.

McKenzie made it into the Western Australian team when he was still a teenager, and caught the eye of the visiting West Indies test side in 1960/61. It was Frank Worrell, or perhaps Garfield Sobers, who observed that McKenzie’s fastest ball seemed to actually gain pace of the wicket.  McKenzie was a powerful young man (his nickname “Garth” referred to a legendary strongman from the comic strips), with the shoulders of a bullock. While his approach to the wicket was not much more than a fast amble of a few steps, enormous energy was generated in the final action. This seemed to catch some of the world’s best batsmen unawares.

To give an idea of the impact McKenzie had when he was selected to play for Australia that same year, it is worth looking at his first Ashes Test. This was the second Test in the series, played at The Oval in London. McKenzie’s first three wickets in Test cricket were Ted Dexter, Peter May and Colin Cowdrey. To cricket followers of my generation or older, these names resonate. They were not just England’s top three, but would have been in the top ten batsmen internationally. Moreover, May was the England captain. McKenzie clean bowled Dexter and had May and Cowdrey caught behind by Wally Grout.

In that match McKenzie also signified his arrival by taking 5/37 in the England second innings, contributing to a remarkable and against-the-odds victory for Australia.

When checking my facts about that debut match, I found myself looking through the results and scorecards of the whole of the 1961 Ashes series in England. One other match stands out, indeed this was one of the great Test matches in cricketing history. McKenzie played a significant part in it … but as a batsman.  The story is worth re-telling.

The Australian captain Richie Benaud won the toss and elected to bat on a greenish wicket, and the Australians could muster only 190 in their first innings, opener Bill Lawry being the only batsman to succeed, making 74. England replied with 367 (Peter May making 95), for a lead of 177.

Australia started well in their second innings, with openers Lawry making 102 and Bob Simpson 51.  But at the end of the fourth day they had a lead of only 150 with four wickets in hand. The pitch was worn and the classy English off-spinner David Allen knocked off three of those four wickets in the first couple of overs of the fifth day, leaving Australia nine down, with a lead of only 150 and all day to play. At the crease were the wonderful all-rounder Alan Davidson and the novice Graham McKenzie. Davidson, it will be remembered, was a wickedly fast left-arm opening bowler who had taken over the mantle as our main strike bowler after the retirements of Ray Lindwall and Keith Miller. He was also a slashing batsman and an incredible catcher in the gully, explaining his nickname “The Claw”).

The Australian dressing room was pessimistic. McKenzie was given no hope of combating Allen, who was bowling unerringly into the footmarks, generating unpredictable spin.

It was at this perilous moment that Davidson took matters into his hands. In one over he smashed Allen three times into the crowd and then settled down to farm the strike so effectively that McKenzie hardly faced a ball. May brought back the England quicks Trueman and Statham, but to no avail. Davidson treated them alike with disrespect, and McKenzie, playing straight down the line at anything on the stumps, stayed with him.  They survived the second new ball and a lead of over 250 was achieved before McKenzie eventually missed one. He was a modest hero. “Sorry Rich, couldn’t do much about it” McKenzie was said to have apologised to Benaud when he came in. Davidson remained 77 not out, but McKenzie had made 32, and more importantly they had put on 98 for the tenth wicket.

England, nevertheless was in the box seat, requiring only 254 in more than half a day. When they reached 2 for150 with the dynamic Ted Dexter in complete command, Australia’s chances of winning the match, or even drawing it, were considered to be zero.

Then Benaud made one of his inspired moves, going round the wicket to Dexter. He got a sharp one out of the footprints, Dexter touched it and ‘keeper Grout did the rest. The imperious Peter May then strode to the wicket. The first ball he casually blocked back. The second he tried to sweep and was bowled around his legs.

From then on, it was a matter of mopping up. Simpson took two miraculous slip catches, including one where he flew to his left to take the catch almost behind Grout’s back. Benaud took 6 for 70, and the last six English wickets fell for 43 runs. Australia won not only the test but the series and the Ashes.

To digress for a moment, I cannot resist recounting a little anecdote told to me by an old forestry colleague Mal Parker about the hero of that test match, Alan Davidson. Mal grew up in the 1970s in country towns in western NSW (his father was a headmaster), and was a big lad and a champion schoolboy cricketer and rugby player. One day the town was visited by some top flight cricket coaches from Sydney, contracted to go around the bush and give clinics to promising youngsters.  So it was that Mal found himself batting to the great fast bowler Alan Davidson himself. Davidson, long retired by that time, was basically just rolling his arm over, bowling wrist spinners. Mal smote his first ball straight back over Davo’s head, the ball disappearing into the far paddock. The second ball was a half-volley on the off stump, and Mal hoicked this so far over mid-wicket that the ball was never found. The third ball, delivered off one step like the others, was a lightning, searing bumper that almost decapitated Mal, and left him sprawled on his back on the pitch.

“Always watch for a change of pace, son” Davidson advised.

There were many highlights in Graham McKenzie’s career.  Following that first series in England in 1961 he became the Australian spearhead, and remained so until he gave way to Dennis Lillee. He was one of the few fast bowlers from any country to perform outstandingly in India. He bowled the first ball in Perth’s first Test match and ended his career with 246 Test wickets,  only two behind the legendary Richie Benaud. He undoubtedly would have surpassed Benaud’s tally had he not been infamously dropped during the 1967/8 tour of Australia by India. McKenzie had terrorised the Indian batsmen in the Melbourne Test, taking 7/66 and 3/85, and was so dominant that the Australian selectors decided to drop him, in the interests of evening-up the series. It is hard to imagine something like that happening today.

The Apotheosis of Adam ‘Stager’ Goodes

The Bullock at the Popping Crease