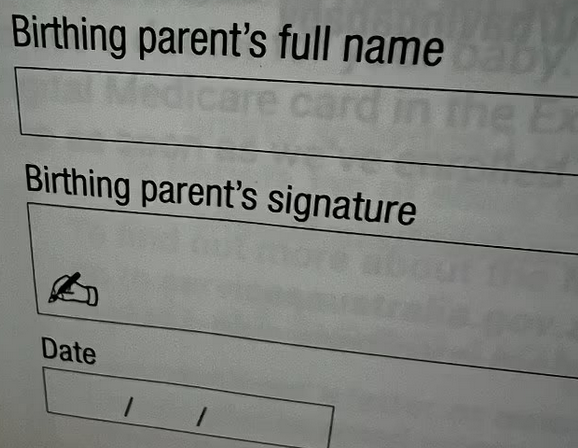 Every time a so-called gender squabble assaults the news, I’m reminded that it could very well present a tremendous learning opportunity. For example, there has been a recent tussle over whether the nightmarish term ‘birthing parent’ is preferable to the more well known and civilisationally sustaining ‘mother’. It’s clarifying, right? Based on their choices, one can easily identify the well adjusted with a sense of biology and reality. And then there’s the rest: those unembarrassed to be thought of as insane.

For context, Sall Grover, a new mother, recently tweeted her annoyance with a Medicare form requiring her signature under the aforementioned category of ‘birthing parent’. For more context, such a term is even disputed among the gender warriors in their institutional redoubts. ABC Everyday, reliably up to date with the latest stupidities, has often replaced the word ‘women’ with the allegedly more inclusive moniker ‘vulva-owners’. The academy, where all this nonsense got underway, likes the less than melodious ‘gestational individual’, as the asylum patients at ANU’s Gender Institute recommend.

Sall Grover, who has bravely inveighed against this madness for years, found a receptive ear in Bill Shorten. As Minister for Government Services, Shorten noticed Grover’s complaint in The Daily Telegraph and immediately moved to have the typo corrected in all government documents from now on. Three cheers, then, for the former opposition leader, who finally has a kind word in the pages of Quadrant. Enjoy it, Bill, as you’ll soon find yourself cast as an unrepentant transphobe, undeserving of inclusion in civilised company.

Grover, who knows such company well, doesn’t hold back, and the bluntness of her response is precisely what makes her such a heroine. All these gender-inclusive language deformities, she claims, are “exclusionary, alienating and derogatory.” She continues, and this is a key point: “It is just this dehumanising language that we have been expected to accept.” I think this remark explains the intensity of the tantrum that so many of the gender ideologues are going through right now: they had been on such a good run that they’d forgotten what a setback felt like. That’s why — and yeah, I do enjoy it — they’re so panicked and confused.

SBS, to the surprise of nobody, tersely summarised Grover’s complaints and then called in the academic and activist vanguard to explain why the extirpation of ‘mother’ is actually inclusive and anyone raising an objection is just, you know, “politically motivated.” Even news.com.au served up this head-scratchingly absurd sentence in defense of Grover’s critics: “Each year in Australia, several men give birth to children.” News Corp’s fact checkers really should have been on that one as it turns out that only women give birth (yeah, you can look it up).

The Twitter reaction — words I always type with a sense of foreboding — was characteristically unhinged. ABC favourite and purported comedian Rebecca Shaw summed up the mood pretty well when she described dear Bill Shorten and Labor as: “Absolutely f*****g stupid gutless pathetic losers”.

The only slightly more articulate Culture Editor at The Conversation, Patrick Lenton, whose vocabulary consists almost solely of ‘transphobia’ and its derivations, huffed about Katherine Deves and her approval of Shorten’s intervention. Thanks, Pat, for your useful reminder that the former Warringah candidate was — yeah, let me just check — absolutely vindicated about the intrusion of trans insanity into medicine, women’s sport and, well, everything.

Those lamenting the deletion of ‘birthing parent’, let’s recall, are the same people who are greatly deluded about a number of other things: men can give birth, they tell you with a straight face; Lia Thomas, that tall and ballsy fellow dominating the winner’s swimming podium is a woman, of course, and don’t you dare think otherwise; lesbians who refuse to be attracted to trans-women — umm, blokes — are contemptibly transphobic. On and on it goes. Unsustainably, one hopes.

Before this scuffle, Sall Grover was under fire for her social media platform, Giggle, which was designed for exclusive availability to women of the traditional and biological variety. Of course, a chappie in the trans community had a sook, took her to court, sent her through hell, and — this is the best part — withdrew and scampered.

She won that, and this one, and I wish her well in the battles to come. Not that she needs much help. Sall Grover has already provided the so far unanswerable rejoinder to all the fashionable whining about gender inclusivity and wotnot that we hear every day without end. She says:

This latest squabble, like a few of the others, reveals the habitual liars that occupy, most unfortunately, much of the elite media, our educational establishment, and social media. Cheer up, though. As Sall reminds us, they’re in effect begging you not to take them seriously. So, it’s simple: don’t.

13 thoughts on “The CIS-Hetero-Patriarchy Strikes Back”

When Even Media Watch Almost Gets It

The Left and the Decline of the Moral Community