The Rise of the Neo-Puritans 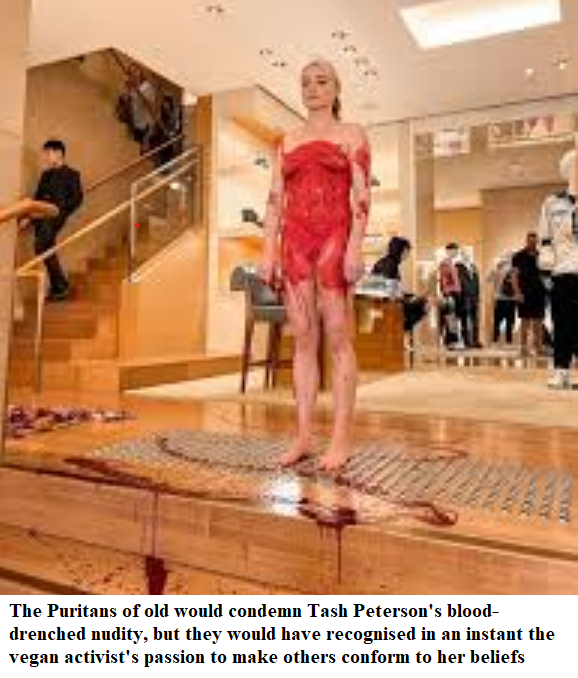 Tighten those trim collars, do up your neck buttons, smooth the perfection of your dress and walk into the new Puritan Age, for an ideal world awaits noble intentions which must be applied to all, most particularly to those who dissent.

There is a saying, ‘no good deed goes unpunished’, supposedly coined by Clare Booth Luce, an American writer and playwright, Republican congresswoman, ambassador and wife of Time co-founder Henry Luce. It means in essence that good deeds and good intentions often backfire, that there is a curse in all gifts because everything has its cost even if not recognised at the time. There are very good reasons to beware of the good-intentioned because in those realms, as Donald Rumsfeld put it, the unknown unknowns abound.

There are some who do good because of the sincere desire to help, but they are rare. Is it steeped in cynicism to suggest most do good not so much because they want to help but because it makes them feel good? I am not decrying this noble motivation, for there is evidence that doing good stimulates our immune function and we benefit physiologically as well as psychologically. Happiness, it is said, boosts immune function , so when we do good we are pleased with ourselves and that means we feel happy.

So, to some degree we are hard-wired to help, but it is a matter of degree and process. What is often overlooked are the effects of our actions because of forces which are ignored. In Jungian terms, the Shadow effect holds that what is done consciously will trigger a striving for balance in the unconscious; the more extreme the actions or beliefs, the more extreme will be the punishment — the curse, if you will —  which the gift carries. In analytical psychology, the Shadow (also known as ego-dystonic complex, repressed id, shadow aspect, or shadow archetype) is an unconscious aspect of the personality that does not correspond with the ego ideal, leading the ego to resist and project the Shadow.

Let us just say that, whatever we do or think, there are always other forces at work and never more so than when puritanism’s dogmatism, strict rules, properness, controlling attitudes and desires rule of the day. It is then acolytes become full-blown zealots, which does not happen overnight but instead is a slow and often unconscious creep until fanaticism manifests itself in the fanatical and uncompromising pursuit of religious, political or other ideals. Zealotry knows no bounds, and it works just as powerfully upon those now demanding the Voice, veganism and the overwhelming reshaping society in the name of climate change as once it did for the Puritans of old.

The definition of the word ‘puritan’, was first applied in the late 16th and 17th centuries to English Protestants who wanted to simplify and regulate worship, and who also endorsed and advanced the witch-hunts and gruesome deaths of so many. They were prepared to go to any lengths to ‘cleanse and purify’. No man, woman or child would be allowed to soil their pure world and their even more pure beliefs.

Does any of this ring a bell in our modern times?

IN TODAY’S world such puritanical beliefs, at times verging on the fanatical, are all around us – climate change, animal ‘rights’, COVID regulations and mandated treatments for starters. Green/Labor agendas are sacred writ and, increasingly, even our food choices reflect alleged moral shortcomings unless veganism be embraced. Notorious vegan activist Tash Peterson has terrorised diners at a Perth Outback Jack’s steakhouse while costumed in a white apron and pants splattered with fake blood, a schtick she has repeated with variations all over the world. Her passion cannot be denied even as her lack of judgement is obvious. Ms Peterson is the dictionary illustration of an intolerant zealot.

The last few years, in this time of COVID, has also brought such Neo-Puritan attitudes to science, medicine and governance, heartily supported by mainstream media. The unvaxed have been demonised in ways and for reasons which have never applied to any other medical treatment. Do you recall how the virus was ‘a pandemic of the unjabbed’, how we were told the inoculated couldn’t contract the ailment or pass it on? That all and any who begged to differ were intent on killing grandma? All rubbish, as we now know, but for months, indeed years, the get-vaxxed-or-else hysteria has cast those who wish to make their own choices as the modern iteration of others once thought to be in league with Satan — forces embracing and promoting evil for the sheer devilment of the exercise. COVID has been a reminder these forces simmer beneath the surface of society, waiting to explode when granted opportunity and encouragement.

But wait, there’s more — and it does not get better.  Increasingly in many belief systems the approach is excessive beyond reason. Fundamentalism rides like the hounds of hell on a wave of self-righteous fanaticism.  We live in a time when humans have been called a “cancer on the planet“, as more than one  paper has asked, and many garden-variety Neo-Puritans also assert. How psychologically healthy will a child grow up to be having been taught she and all humans are a disease? Ironically, such a perspective mirrors the Christian belief that we are all sinners, it’s just that this mirror is is the distorting variety of a Giggle Palace fun arcade.  We have invented a new form of sin and the desire of the fanatic to purge grows more powerful, ever more insistent.

Climate change seems to ruffle the collars of the Puritans more than most. Those who dare to question the doom-laden narrative are deemed wicked. The denial of climate change is not just ignorant, but ‘malign and evil’, according to Mary Robinson, the former UN high commissioner for human rights and special envoy for climate change.

How different is any of this to being in the dock at a Salem, Massachusetts, witch trial in 1693, when being found with a wart or a mole could send you to the gallows? The modern warts and moles are opinions which challenge a current narrative but they are enough to see even highly qualified professionals burn on metaphorical pyres, their lives and careers destroyed.

Doctors are being deregistered, struck off for challenging the ever-changing official edicts on COVID. How can that make for good science and safe medicine? How does any of this differ from the religious fanaticism of a past where reason and common sense were trampled in the cause of dogmatic and compelled belief? The encouraging news — one item at least — is word of a new medical association to defend the right of doctors to speak and act in accordance with their expertise. Such actions are not taken by the usually discreet and mostly conservative medical profession unless the need is dire. When the Pharmacy Guild of Australia places itself between doctor and patient by ordering its Main Street chemists not to fill lawful prescriptions, in this instance for ivermectin, you know such pushback is long overdue. And don’t be fooled by the ever-quotable, Left-colonised AMA, which now represents less than one-third of Australian doctors, down from 92 percent in 1962. At least now some are speaking up.

The rise of the Neo-Puritan Age has been fuelled by more than one generation having been raised to believe they can not only have it all, they entitled to have it all and they cannot be wrong. What a gift they would have been to the Protestants in the 17th century, convinced of their righteousness and the God-given nobility of their cause. Try talking to someone convinced we are headed for global catastrophe in terms of climate, or that animals are the equal of humans and should be treated as such, and the echoes of those original Puritans can be heard loud and clear. When fanatics heat their passions to boiling point before the fires of intolerance and contempt, the pages of history that follow tend to be written in blood.

Is that really what the normies of this world are prepared to accept?

17 thoughts on “The Rise of the Neo-Puritans”

Our Golden Age of Galloping Hypocrisy