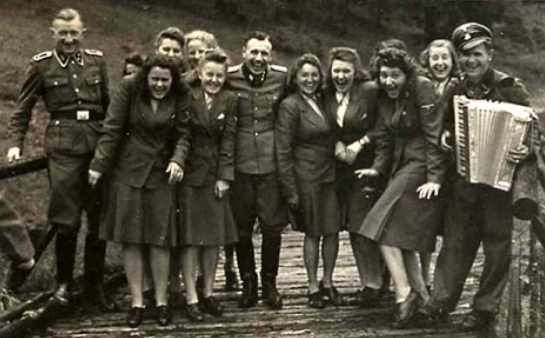 One of the most witless, inane and paradoxically evil ideas to contaminate contemporary culture in recent years is kindness, or, as what amounts to a campaign slogan says, ‘Be Kind’. On the surface, what could possibly be wrong with being kind to each other? Only brutes and criminals would find something wrong with such an obviously decent notion. The problem, though, is that beneath its beautiful and superficially moral surface, kindness, in its contemporary iteration, is surreptitiously ideological and smuggles into everyday life entirely new ideas of metaphysics, logic and epistemology, ones that have profoundly negative consequences for liberal democracy, freedom of speech and freedom of conscience.

The photo featured atop this article is of workers — colleagues, in fact — who are being respectful, courteous, and, yes, kind to each other. The scene is Central Europe in the summer of 1944. Apart from the uniforms, nothing is unusual; the photos could have been taken at any off-site staff training session anywhere in the world. What most people who view the photos won’t know, though, is that the happy, collegiate staff were taking a break from murdering 600,000 Hungarian Jews in the Auschwitz-Birkenau concentration camp. They are members of the Schutzstaffel, abbreviated as SS or, in more simple terms, Nazis.

The political philosophy of Nazism, which, like all ideologies, is founded on a metaphysical view of the world, and on a logic that permeates all aspects of life, informs the grotesque inhumanity that these otherwise normal people inflicted on innocent human beings. The cruelty, in other words, is built into the system and percolates downwards from the ideology to everyday behaviour. And being kind, respectful and courteous to your colleagues, friends or even strangers is irrelevant in this situation. The underlying political philosophy is what’s important in guiding the perpetrators’ actions.

I use this analogy to explain that ideology overrides and distorts everyday behaviour and that ideas are more important as a guide to action in a political system than a simplistic call “to be kind”. The corollary is that getting the politics right is imperative to getting the morality and ethics right. Group morality — ideology, that is — is always based on a lie. Also, no political ideology has ever presented itself as anything but moral. The Nazis, in one of the great ironies of history, believed that what separated the Aryans from other races was their kindness to one another and to animals.

We’ve established that kindness per se is not a sufficient condition for decent behaviour because political ideologies determine who can be treated with kindness and who can be treated with cruelty. This gets to the crux of the present situation because underpinning the current notion of kindness is the contemporary moral and ethical system of Diversity, Equity and Inclusion (DEI), which has been introduced into almost every institution in Western liberal democracies. The HR department in your workplace, and workers’ rights legislation in your state or country, will almost certainly be infused with this ideology.

The problem, though, is that the politics of Diversity, Equity and Inclusion — wokeness, in other words — establishes a hierarchy of the saved and the dammed through the postmodern notion of identity. Where you sit on the hierarchy of marginalised groups, or whether you are intersectionally oppressed — perhaps doubly, triply or multiply oppressed — determines your saintly status. Individual rights, then, are no longer the sine qua non of liberal democracy. What we have, essentially, is irrationalism as a new metaphysics.

How has this situation come about? How are individual rights being supplanted by group rights, which are the modus operandi of all authoritarian regimes? How has this occurred in a liberal democratic political system where debate is a constituent part of its philosophy? It’s simple: institutional capture. Individual rights have been hollowed out from the inside by ideologues. What’s most depressing, though, is that the whole unedifying spectacle has been performed in the plain sight of our governing elites, who, while often hard-working and honest, are seldom intellectually sophisticated. Advocating for a zebra crossing or a new school hall does not need an understanding of Derridean deconstruction.

While kindness is the slogan, the Trojan Horse of the ideology is the triple strategy of equivocating speech with violence, subjectivism and the weaponising of mental health. It’s a tapestry of confusion where all the threads fit together.

Conflating speech with violence means that hurt feelings, rather than damaged bodies, are utilised as a weapon of the ‘oppressed’. Hurting someone’s feelings — subjectivism, in other words — is viewed as violence. This is important because liberal democracy, at its core, rejects violence. Violence, as any civilised person should know, is always the last resort in adjudicating conflict. Consequently, indulging in violence, especially towards a disadvantaged person or an identity group, is the very definition of discrimination.

Modern subjectivism is based on the postmodern claim that truth is a fiction — bizarrely, even logical and scientific truths. Reason, according to Foucault, one of the most influential postmodern philosophers, is no more than a political strategy of the elites to gain and maintain power. There could be truth, but it’s irrelevant whether it exists because ‘truth’ is always an instrument of power. “Truth”, in its modern iteration, is defined as the epistemology of straight white males, who are viewed as the purveyors of all that is destructive in modern history. According to postmodernists and intersectional feminists, though, there are other ways of understanding the world, amongst them the ‘lived experience’ of identity groups , which are presented as equally valid. Feminists, for example, have claimed for decades that witchcraft and alternative medicine have been ‘marginalised’ by male ways of knowing, and that these epistemologies are as legitimate as the scientific method. That this is nonsense needs to be stressed because the idea that all opinions are valid has become a constituent narrative of contemporary culture. The irony is that postmodernists could not flourish if they followed their own philosophy, because irrational people live sub-optimal lives or simply die.

Which brings us to mental health. The expansion of mental health psychology into areas that, until recently, were considered the existential and ordinary facts of life, is not coincidental. The phenomenon runs parallel and in conjunction with the rise of Diversity, Equity and Inclusion. Feelings are now the gold standard of whether one is suffering from a mental health problem, not an imprudent lifestyle choice or any of the dreadful psychological conditions that make life a misery for people whose minds or brains are not working in a functional way.

The three strategies are equally important to the ideology, and they shift, twist, intertwine and turn depending on the situation. Put them all together and a comprehensive strategy exists to curtail freedom of speech, individual conscience and, inevitably, liberal democracy.

That the politics goes under the radar is a feature and not an accident of the ideology. What DEI means in practice is not what its proponents advertise to the world. In practical terms the ideology works in the following way: Diversity stresses a plurality of group identity and not a plurality of opinion. Equity is an impossible dream which can only be enacted, with dreadful consequences, by force. And inclusion, by definition, welcomes different identity groups without criticism, and no-one else. Remember that, according to the theory, subjective feelings, which are denied validity by individuals and society lead to mental health issues, while truth itself is grounded in the identities of race, sex, class and gender. Everything must be affirmed rather than rejected or criticised because words which offend are construed as violence or are damaging to a person whose “identity” is questioned or criticised.

This is why statues are being pulled down around the world; why people with what were, until about five years ago, moderate views are called bigots; why supporters of free speech are called Nazis; why J.K. Rowling is called transphobic; why bad works of art by minority figures are replacing Beethoven, Shakespeare and Renoir (or, at the very least, how they are presented in concert halls, theatres and art galleries). It’s why those who offend are hounded from their jobs and see their reputations and livelihoods ruined. And all this is being perpetrated by ideologues with a fanatical zeal and, ironically, not a shred of kindness.

I could go on; the list is endless. Nothing solid survives this pernicious attack on everything of value, and it’s why the cult of kindness and its three subordinate strategies — equating speech with violence, subjectivism and weaponising mental health — undermine the entire edifice of liberal democracy, which is a form of government based on individualism and the robust claims of negative rights. Two things define liberal democratic philosophy: don’t do this, and you’ve a right to offend. In straightforward terms, you can be an absolute bastard if you don’t commit a crime or perpetrate violence on your fellow citizens. That’s about all people can ask for or expect.

The rest of the noise about rights is virtue-signalling nonsense, money-making scams, or snake-oil drenched in false morality. Sometimes you need to be cruel to be kind. And sometimes you just need to be kind. Woke kindness is the inverse of the normal conception of kindness and it is toxic to individual rights. Don’t fall for the nonsense, linguistic equivocation is one of the oldest tricks in the book.

7 thoughts on “Some Harsh Words About the Cult of ‘Kindness’”

Against the Legalisation of Prostitution

The True Colours of the Rainbow Flag