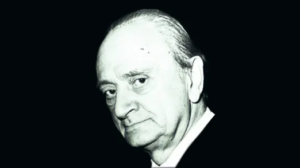 While largely unknown in the West, the works of the Italian cultural critic and philosopher Augusto Del Noce (above) should be compulsory reading for anyone concerned about the plight of Western civilisation, especially Australia. Del Noce (1910-1989) argues the rise of neo-Marxist inspired radical secularism, eroticism and scientism are all conspiring to weaken and undermine long-held convictions about the significance and benefits of Western civilisation, Judeo-Christianity, liberalism and heterosexuality.

Rationality and reason are denounced as binary and Eurocentric, our political and legal systems condemned as oppressive, Christianity vilified and banished from the public square and sexuality and gender defined as fluid and limitless.

Much like Orwell’s 1984, language control and group think are all pervasive and anyone who fails to conform is guilty of thoughtcrime and publicly attacked and silenced.  The ideal of a liberal education committed to impartiality, wisdom and truth no longer applies as universities have long since been infected with cultural-left critical theory and postmodernism. 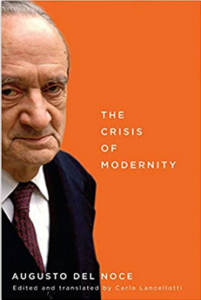 In a series of essays in The Crisis Of Modernity Del Noce details the origins of what is infecting Western nations and explains, unless checked, why the future will increasingly be one of intellectual conformity, moral relativism and spiritual and transcendent emptiness.

Fascism, communism and dictatorships are commonly referred to when describing totalitarianism.  Since the end of the Second World War Del Noce argues the West has been transformed by an even more dangerous form of totalitarianism involving scientism, eroticism and Marxist inspired secularism.

What all have in common is a radical ideology that “absolutely denies traditional morality and religion without preserving or sublimating any aspect”.  The new totalitarianism promises an earthly utopia where all will be provided if only people deny their individuality and conform.

Del Noce, while not denying the benefits of science, warns against what he describes as a totalitarian form of science, one where it is “the only true form of knowledge” and any sense of the “metaphysical or religious” is considered subjective and without foundation.

Scientism tells us God is dead and mankind has the power to control human nature, to unravel the origins of the universe, to transform the world and to structure a utopian society where humans flourish.  Radical transgender theory argues it’s acceptable to turn men into women and women into men. Using science to weaponise viruses, including those spread by bats and the product of what is known as gain-of-function research, also illustrates the dangers of unrestricted science freed from any moral or ethical constraints.

Beginning with Wilhelm Reich’s Sexual Revolution and supercharged by the Sixties cultural revolution Del Noce argues eroticism is all pervasive.  Such has been the radical transformation that behaviour and actions once considered unacceptable are now deemed normal without “any moral reaction”.

Reich, who was associated with the Frankfurt School established in Germany in the 1920s, argues traditional morality is repressive and individuals have the right to express their sexuality in any way they like, free from moral or societal restrictions. Summed up by the 60s slogan ‘make love, not war’ and the emergence of a narcissistic, pleasure-driven youth culture, sexual self-expression is the new religion.  Internet pornography is endemic and eroticism permeates the West’s way of life. De Noce defines radical secularism as involving “a process during which all the worlds beyond have disappeared, leaving only the historical, social, human and finite world”, a world where secularism “presents itself as a process of liberation from authority, theological or human, transcendent or empirical”.

The consequences of the West succumbing to the new forms of totalitarianism are widespread and manifest.  Such is the dominance of scientism that millions around the world have suffered draconian restrictions as a result of the China-virus leading to lockdowns, invasion of privacy, bankruptcy and ill health.

Pornography of every depraved description is now available 24/7 leading to the sexualisation and exploitation of women and the belief any kind of sexual act is permitted.  Sexting is common among primary and secondary age students; gone are the days when movies relied on inuendo and wit to convey allure and sensuality.

While promising the workers’ paradise and a society free of exploitation Marxism has led to the death of over 90 million involving executions, imprisonment, starvation, famine and disease. As to the reason why so many died Del Noce refers to Lenin’s statement “Morality is whatever serves the success of the proletarian revolution”.  Under Marxism “every kind of violence, every ruse, every illegal action, every dissimulation, and every deception become licit if they are deemed to be necessary to reach the goal”.

As a result of cultural-left ideology and cancel culture, Western nations like Australia are undergoing radical change that strikes at the very heart of our institutions and way of life.  As to why, look no further than The Crisis Of Modernity.

Dr Kevin Donnelly is a senior research fellow at the Australian Catholic Uuniversity.

Of Death and Dignity