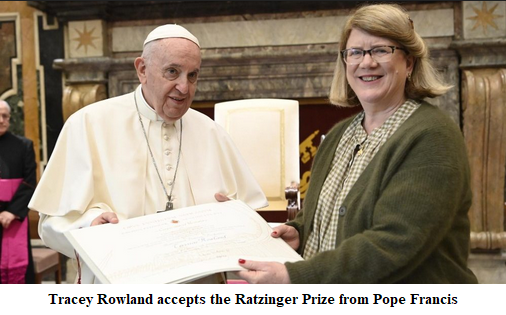 An Australian theologian, Professor Tracey Rowland, has been presented by Pope Francis with the Ratzinger Prize, regarded as the Nobel Prize for theology. This confirms her as one of the world’s leading theologians and as a major figure in the intellectual struggle to understand and contest the present crisis in Christianity and Western Civilisation. Central to this struggle, she  contends, has been Joseph Ratzinger, later Pope Benedict XVI:

This is because both the Church and western culture is in a state of crisis … The crises are primarily of an intellectual nature and they have secondary effects in the world of culture, spirituality and human relationships… To get out of any crisis someone needs to do a pathology report on the cause(s) of the problems and to recommend solutions,” and this is what Joseph Ratzinger has done.

Professor Rowland is a leading contemporary interpreter of Ratzinger and her exposition and application of his thought stands as an increasingly important achievement as the West sinks ever deeper into the nihilist abyss about which alert theologians and philosophers warned throughout the 20th Century. She addresses this tradition in her latest book, Beyond Kant and Nietzsche: The Munich Defence of Christian Humanism (2021), which provides studies of six German theologians of the past century who took a stand against Nazism, and whose thought shaped that of Ratzinger.

As the title of her latest book makes clear, Professor Rowland recognises the central position that Nietzschean thought has come to assume in the cultural crisis of our time, especially in its use by Cultural Marxists and postmodernists to consolidate a comprehensive relativism as the default setting for what now passes for all contemporary thinking, along with the worship of the ‘Will to Power’ that contemporary politicians find themselves unable to resist (we’re looking at you, Dan Andrews). She also highlights how the philosophy of Kant has been utilised to eliminate any recognition of the noumenon or transcendent realm, and consequently has enthroned a suffocating form of ‘absolute immanentism’ at the centre of subsequent Western thought. This has crippled the intellectual culture of the West and provided the basis for the rise of Nazism, Communism, and other political religions, along with the totalitarian tendency that is becoming ever more evident in contemporary society.

This field of Continental scholarship is one in which Professor Rowland is particularly at home, having done all her advanced study in Europe and the UK.  At present she holds the St. John II Chair in Theology at the University of Notre Dame and is an Honorary Fellow of Campion College. The principal focus of her work is on the theology of culture, the history of theology, and on theological anthropology (e.g., nature and grace, intellect, faith, reason, and the imagination). Her earliest work was on political philosophy, including the relationship between culture and freedom, and also on Marxism, Liberalism, and the Catholic engagement with these dominating contemporary ideologies.

She is also an expert on Continental theology, philosophy and social theory, and is a strong advocate of interdisciplinary work, cross-fertilising theology, philosophy, the social sciences and the humanities. She is the author of eight books and over 150 scholarly articles, translated into Spanish, Italian, Portuguese, Polish, German, French, and Romanian. She is a member of the International Theological Commission, serves on several editorial boards, including Communio: International Catholic Review, and Radical Orthodoxy: A Journal of Theology, Philosophy and Politics, is patron of the Australian Catholic Students Association and of the Christopher Dawson Society of Western Australia, and is a Dame of the Order of the Knights Hospitaller.

Amongst her books, she has published a text on Catholic Theology (2019), which illuminates the complex trajectory of that field over the past century, with a focus on Liberation Theology and the various attempts to revivify the Thomist tradition. It is notable for the way it confronts the fragmentation of the field and the colonization of theology and the humanities generally by various species of Marxism and Postmodernism. She has also published Ratzinger’s Faith: the Theology of Pope Benedict XVI (2008) and Benedict XVI: a Guide for the Perplexed (2010). The former is directed to a general audience while the latter is most suitable to those studying theology. It makes the perhaps unfashionable, but nevertheless undeniable, case that Pope Benedict’s great body of work, stretching back many decades across the tumultuous intellectual history of 20th Century Europe, makes him intellectually one of the most significant pontiff’s since the Reformation.

According to Professor Rowland, Ratzinger is important to today’s world for a number of reasons: his entire body of work is informed by a comprehensive knowledge of the intellectual history of Western Civilisation; he possesses a deep understanding of Western culture, particularly of Cultural Marxism and secular ideologies generally, and is able to communicate this knowledge in an accessible fashion – as she observes

he combines deep piety with high  scholarship, a rare combination; he recognizes and coherently addresses the complexities of the issues he deals with; and, she observes pointedly

he actually believes the Catholic faith. One can’t always assume this of people on the Church’s payroll.

Tracey Rowland exhibits the same range of qualities and, as her winning the Ratzinger Prize confirms, she has the high quality intellect and scholarship that is desperately required (especially in Australia) if Western Civilisation is to confront effectively the forces that are currently seeking to destroy it.

Scratching Scripture in the Name of Fashion