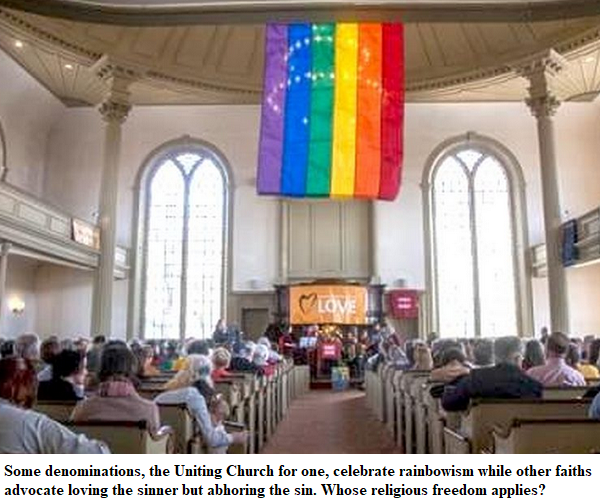 I recently read an article by Frank Brennan on the Bill on religious freedom. He quoted a High Court judgment of 1983 in which justices Anthony Mason and Gerard Brennan said this:

The freedom to act in accordance with one’s religious beliefs is not as inviolate as the freedom to believe, for general laws to preserve and protect society are not defeated by plea of religious obligation to breach them. Religious conviction is not a solvent of legal obligation.

These laws are most likely to be human rights and anti-discrimination laws. Religious freedom is thus captive of other laws. This would be fine if the other laws were enacted by enlightened parliaments steeped in traditional Christian values. No longer.

The Australian Human Rights Commission (recall, without nostalgia, the past tenures of Gillian Triggs and Tim Soutphommasane) and the various state human rights and anti-discrimination commissions and boards, established under law, are always in the mix; potentially sniffing around ready to spot offence on the part of Christians against protected minorities.

You might recall Tasmania’s Anti-Discrimination Commission taking up a case against a Catholic Bishops for issuing a pastoral letter on the ‘same-sex marriage’ debate titled: “Don’t Mess with Marriage.” This was distributed in the form of a booklet to parents of Catholic high school students throughout Australia. The Catholic Church had been offensive, it was claimed in September 2015 by an aggrieved party.

Offensive how? Apparently by expressing the mainstream Christian view that the term ‘marriage’ should only apply between a man and a woman, and that such a union offered the best environment within which to bring up children. Evidently some people are easily offended by Christian values — by values that used to be everyone’s values not so long ago. And the reason offence is taken is that some fornication doesn’t merely dare to speak its name but now shouts it from the rooftops.

Most of us heterosexuals have fornicated (had sex outside of the confines of a marriage between a man and woman) and take in our stride the Christian perspective that it’s sinful. Some, like me, take it as gospel, so to speak. But what we don’t do, in any event, is to jump up and down in fits of high dudgeon.  Not so for some on the gay side of the street. They seek public ratification, glorification almost, of their sexual proclivities; mere tolerance is passé. Claims of homophobia await those who don’t kowtow.

Hence Israel Folau got into trouble and lost his rugby-playing job because, as a lay preacher for his church, he paraphrased a passage from 1 Corinthians. To wit: “Do not be deceived: Neither the sexually immoral nor idolaters nor adulterers nor men who have sex with men nor thieves nor the greedy nor drunkards nor slanderers nor swindlers will inherit the kingdom of God.” Drunkards, thieves, adulterous took no offence. Guess who did?

The Religious Discrimination Bill 2021 (RDB) is meant to protect religious institutions from LGBT activists and from increasingly militantly atheist-filled parliaments and human rights bodies. Though it will not protect the Folaus of this world; that protection has been struck out. Liberal moderates at work, otherwise called ‘politicians’, who might well find a more convivial home on the green-left side of politics.

I skimmed the RDB. It bamboozled me but, if passed, will no doubt offer many hours of lucrative employment to human rights lawyers. And, to boot, employment in a whole new bureaucracy under a Religious Discrimination Commissioner.

The RDB covers a whole gamut of activities within which religious tests or discrimination are not allowed. However, one of its principal objectives is to allow religious schools to give preference, when hiring teachers, to those who share the faith of the school. Common sense when you think about it. Hmm? In the past maybe.

Among other things, Liberal moderates apparently want more protection for gay students in the Bill. Specifically, they want Section 38(3) of the Sex Discrimination Act (SDA) struck out.  This Section provides a carve-out from Section 21 which, among other things, outlaws educational institutions from discriminating against students on the basis of their sexual orientation or gender identity. Relevantly, Section 38(3) of the SDA reads as follows:

Nothing in section 21 renders it unlawful for a person to discriminate against another person on the ground of the other person’s sexual orientation [or] gender identity… in connection with the provision of education or training by an educational institution that is conducted in accordance with the doctrines, tenets, beliefs or teachings of a particular religion or creed, if the first-mentioned person so discriminates in good faith in order to avoid injury to the religious susceptibilities of adherents of that religion or creed.

As a rule, discrimination has no place in human affairs, particularly when it comes to important things like education and employment.  However, to my mind, and leaving students aside for the moment, a Christian school should be allowed to reject applications from openly gay men and women teachers.

I dare say some teachers at Christian schools live sexually impure lives. But someone in a heterosexual adulteress relationship, or who sleeps around, or who, if a man, visits prostitutes, is not going to extol such behaviour or broadcast the fact of it. Gay pride, on the other hand, clashes starkly with the precepts of Christianity. Are there any moderate Liberals who have a problem with this? My local dripping-wet federal member, Trent Zimmerman, for example? If so, despair.

However, students are a different kettle of fish from teachers. I’m uncomfortable about discrimination against ‘straight’ gay students, if you understand my meaning. In my view a student’s sexual orientation should not, per se, be a factor in gaining entry to a religious school. On the other hand, a religious school should not have to put up with gay students flaunting their sexuality or with cross-dressing students.

The Australian Christian Lobby, which I generally support, has reportedly threatened to withdrew support for the RDB if Section 38(3) of the SDA is removed. Difficulties abound in finding a sensible way through when commonsense and unifying traditional values are gone. It’s hard to construct legislation which satisfies widely disparate points of view. That’s why the RDB is floundering.

38 thoughts on “Religious Freedom in a Godless Age”

Woke Dudes with Mitres and Croziers