The Ominous Warning of Mount Warning 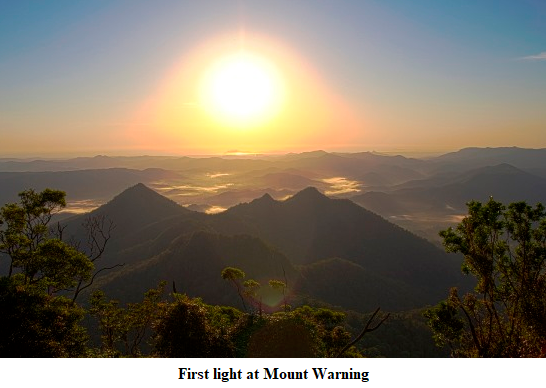 Since the early 2000s NSW National Parks and Wildlife Service (NPWS) has been working to shut down the stunning bushwalk to the summit of the best preserved eroded shield volcano in the southern hemisphere, Mount Warning , known in the local Aboriginal dialect as Wulambiny Momoli (the Scrub Turkey). The walk attracts well over 100,000 visitors annually and properly managed could sustain many more. The real reasons behind the closure are, in my view, more likely due to NPWS laziness than falsehoods about safety, environment or contested demands of so-called Aboriginal custodians.

With the rise of authoritarianism brought about by governments’ shambolic management of the COVID-19 pandemic it seems the door opened as of in March 2020 for NPWS to finally get its warped wish.

Under the guise of false proclamations about safety related to the rock scramble below the summit and a complete lack of understanding of the nature of transmission of corona viruses in outdoor settings, NPWS closed the entire national park in March 2020. A locked gate was placed 3km from the base car park to deter visitors from entering, though a few brave souls did and reported the deteriorating condition of the trail and secret removal of the chain that formerly assisted climbers approach the summit.

ambit claim: An extravagant initial demand made in expectation of an eventual counter-offer and compromise.

Despite protests, the “temporary” closure was extended again and again. Over the years of the COVID pandemic the claims moved away from safety and settled on the need for NPWS bureaucrats to consult with the officially authorised Wollumbin Consultative Group (WCG) – a group of mixed-race Aboriginal men with highly contested claims on the mountain – to produce an Aboriginal Place Management Plan for the park. This arises from the 2014 declaration of everything above the 600m topographic contour in the Mount Warning National Park being an “Aboriginal Place”. This declaration, published in the NSW government Gazette, indicated there are at least eight separate Aboriginal stories about the mountain and its cultural meaning, with each story being equally valid and with no one story taking precedence[1].

As a side note in June this year the NSW Liberal government announced plans [2] to hand over control of all (yes, ALL) our NSW National Parks to Aboriginal Groups that live nearby. This includes the title to the land and not just management rights. Bizarrely, future management of NSW National Parks will be based on a Memorandum of Understanding between NPWS and as yet undetermined Aboriginal groups. The agreement would involve rent being paid and management plans and access for the public being at the whim of local officially authorised Aboriginal groups.

Last week we saw just how these plans and agreements will play out in the real world. For Mount Warning National Park listed as such in 1929 and “dedicated to the people forever” [3]”, the new Aboriginal Place Management Plan [4] approved by the WCG is devastating news. In short the plan:

♦ ignores dissenting Aboriginal voices (some groups encourage visitors to climb and challenge the rights of the WCG to be the sole negotiating agent with NPWS). The wonderful message of Late Ngaraakwal Elder Marlene Boyd left on the cutting room floor:

“I do not oppose the public climbing of Mt Warning – how can the public experience the spiritual significance of this land if they do not climb the summit and witness creation!” [5]

♦ allows for closure of the entire park,

♦ provides for the removal the summit lookouts, helipads and presumably the important geodetic survey markers – all trace of Western culture to be stripped though it’s hard to see how the well-constructed drystone walls built by volunteers from Murwillumbah in 1909 near the summit will be removed. Ironically all these structures described in the plan as being in “good condition”.

♦ allows for copyrighting the image of Mt Warning, and without the plan even being in force woke corporations are already falling over themselves to give away valued corporate capital – Stone and Wood’s Cloud Catcher Pale Ale will be discontinued to assuage the wishes of the WCG[6].

♦ extends Aboriginal management outside the designated Aboriginal Place to adjacent spurs and ridges and provides for “removal of infrastructure” in those areas that “could affect intervisibility to important cultural sites”. How many local residents with views of Mount Warning will need to relocate? How many power lines and communication towers will need to be demolished so a few are not offended?

♦ allows for ongoing access to the mountain for a select group of the WCG mixed race men, with access presumably to be provided at the tax payers expense.

What was once billed internationally as a magnificent walk to witness the first dawn in Australia will soon be the exclusive property of a small group disgruntled extremists who, like Tolkien’s Golem, want to keep the Precious for themselves. If this is a taste of things to come the public will no longer have any National Parks in NSW to enjoy.

Oddly, NSW Environment Minister James Griffin has accepted the WCG plan without question and his NPWS minions are now using it as a basis for developing a Memorandum of Understanding to manage the park. Though with no public access one can only wonder why. This farce ranks alongside Yes Minister’s award-winning hospital without patients [7].

In times past a politician would be able to recognise an ambit claim as blatant as this and treat it accordingly. Credit to the savvy members of the WCG in recognising the NSW Liberal government consists largely of spineless, unprincipled twits who will buckle and hand over  everything. How surprised they must have been that their exaggerated claims would be met with a meek “yes” from our mouse-like government!

If the minister were governing for the majority of NSW citizens the starting point for any negotiation would be to maintain the status quo perhaps with including options for further development in the park to increase economic activity in the area including via feratta routes on the mountain’s magnificent northern rock face; a circuit walk around the base; hang gliding from the summit and perhaps a café serving local treats in a car park patrolled by rangers to prevent angry locals slashing tyres [8].

Given a bit of to and fro, perhaps the end point of this negotiation would be for continued public access with some better toilets and bins and regular maintenance by NPWS, and perhaps a week long “Cloud Catcher” festival where the mountain could be closed to celebrate those eight  indigenous stories (including the one encouraging visitors to the summit).

What is certain is that without pushback from the public this decision will stand and will set the precedence for management in all our national parks. Please lend your angry voice to object to this nonsense and write to your local, state and federal government member.

Better still, jump the gate and exercise your own cultural rights.

14 thoughts on “The Ominous Warning of Mount Warning”

The ‘C’ in Their ABC

The Evil of Two Lessers

A Conservative Abandons Almost All Hope