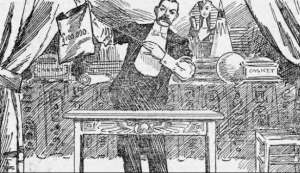 Two weeks ago, Comedy Central’s Jim Jefferies responded to the Christchurch massacre with a hit piece on Avi Yemini, one of the emerging breed of conservative citizen reporters producing videos on social media. Jefferies, an Australian now based in the US, interviewed Yemini a few months prior to the massacre, but rushed his heavily edited footage to air as an exposé of purported Australian white supremacism. It was built around a portrayal of Yemini as an anti-Muslim activist and an anti-black racist.

Unfortunately for Jefferies, Yemini secretly recorded their conversation. After Jefferies aired his ambush, Yemini followed suit with a short series combining segments from Jefferies’ piece with unedited sequences from his own. The results are devastating for Jim Jefferies and Comedy Central, as you can see below.

The glaring dishonesty of the editing was bad enough, but after all, such is the stock-in-trade of television “journalism.” More damaging to Jeffries, and the trigger for a bout of Twitter-rage, was the footage of Jeffries using a less well appreciated technique of interviewers: provocation.

Say, for instance, an interviewer wants his subject to reveal that he hates Muslims, or that he is a conspiracy theorist about 9/11, or any of a dozen other real or imagined PC crimes and misdemeanors. He lulls his subject into a sense of camaraderie and complicity by revealing, off the record, that he shares those same opinions, or has doubts about the “official” line on one event or another, hoping the subject will then open to a supposed comrade about his own beliefs. In Jeffries’ exercise in ambush journalism, the comic even sketched the Prophet as a “wobbly ghost”, which militant Islam treats as a fatwa offence worthy of death. Such revelations elicited from an interview subject, however deficient in genuinely damning content, can then be worked up into a case for the prosecution by teleological editing.

The best laid schemes gang aft agley; and so did this. Jefferies’ purpose was evident to Yemini, and the former’s intention was thwarted by that which the latter’s secret recording revealed. Jefferies’ provocations, though filmed, were never intended to be broadcast, and though they were designed to elicit desired responses, were taken by the dim bulbs of the social media madhouse to be his actual opinions because they were secretly filmed. One such example of online reaction is reproduced below 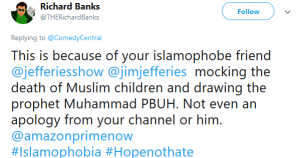 Now take another scenario. In this circumstance the provocateur is the one secretly recording. He does not reveal that he is working with a reporter, and he pretends to be a person of some influence with many people in the community who share a common interest in guns. His subjects are Pauline Hanson and her staffers, who take him at face value, are unaware, and unsuspecting, of his purpose. He arranges meetings with others who share some of Hanson’s concerns, and some of the concerns that he pretends to. He maintains this pretence for three years.

Politicians talk to a variety of special interest groups and influential individuals. Unfortunately, great personal integrity is contra-indicated for today’s politicians. A degree of adaptability is regarded as a very good thing. When politicians meet influential people, they are always looking to benefit to some extent from that influence; to minimise negative attitudes in some, to gain more enthusiastic support from others. One might expect, then, that politicians in a private meeting and being goaded and cajoled, might say some things they would not say in public. No conclusions can be drawn, though, as to whether those words represent the actual beliefs of the politician.

And so it came to pass, after three diligent years, that a minute or few of video clips were released in such a way as to cause maximum damage with an election pending. A few short clips of video might seem like a poor return on three years of investment, but these clips were gold for Hanson’s opponents. The media howled and set off after the prey.

After the release of the second batch of videos, I happened to see Shari Markson, who was filling in for Peta Credlin on Sky. She was interviewing Andrew Bolt about the videos. Bolt expressed his reservations about the circumstances in which these had been recorded, and the need to see the full context before making a judgement about them. His deliberate reasoning shone almost as brightly as Markson’s high-wattage good looks; but she was having none of it. The words!  The words! She might have mentioned the thrill of the chase, or the glittering prospect of shooting down the Hanson bogey – nightmare of “progressive” journalists, irrespective of where they happen to be working.

The implicit assumptions about these particular words, words, was that, because they were secretly filmed, they must represent the actual beliefs of Pauline Hanson. They may do; they may not. Context is everything.  One hallmark of Hanson’s public career, and the one that both sets her apart from other politicians and explains her popularity, is that she spoke her mind in public. Would that more politicians did. That is not a conclusive consideration, but it does weigh in the balance in her favour.

Cui bono? The main beneficiary of this media setup is the Coalition. The release came in the midst of an attack on One Nation led by the Prime Minister. The operation was designed by a former ABC senior staffer, Peter Charley, working for Al Jazeera, and was lavishly financed by that network. Al Jazeera has, as one of its primary purposes, the dissemination of the worldview of Qatar’s ruler.

Qatar is a pariah among the Arab states because of its support of the Muslim Brotherhood. It also provides funding for Hamas. At a time when the other Arabic Gulf States are realising that the djinn of Islamist terrorism needs putting back in the bottle, Qatar is an outlier.  How sobering is it to think that, if this persistent undercover operation of Al Jazeera helps Scott Morrison to victory, Al Jazeera may consider that the Coalition owes it a favour?

Distance is no barrier to our generosity