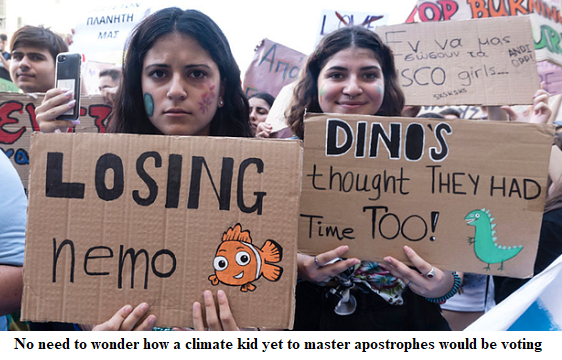 George Williams is professor at law at the University of NSW and presumably an adult in the room. Think again. He wants to extend the franchise, as if its extension down the many decades had not caused enough trouble already. Let’s remind ourselves. Left-wing, lately green-hued, governments, wreaking untold harm, would have been far fewer in the number but for sub-21-year-olds voting their cause and propertyless, non-taxpaying recipients of tax-payer largesse doing likewise.

Williams would like to pile misery on top of injury by allowing the vote for those aged 16 and 17. Recall, in their accumulated wisdom gathered in school playgrounds, 16- and 17-year-olds voted to end the 350-year union between England and Scotland. Fortunately, for the Scots (perhaps not for the English, who regularly hand the Scots sit-down money) there were enough older adults around in Scotland, of sound mind, careful with their money, to vote sensibly.

My own view is that the minimum voting age should be 25 and only then when net income taxes have been paid for at least three years. Extreme? I’ll show you extreme. Hayek (“Wither Democracy?”) in a lecture delivered in Sydney in 1976, advocated restricting the voting age to those aged 45 years, with parliamentary members also needing to be at least 45, voted in for a fifteen-year fixed term. Hayek understood the perils of party politics and vote buying.

Now that I’ve established the fact that I’m quite unextreme; I’ll set out what is general common or garden knowledge. Age matters; even though this seems to have passed by some adults. I add that it hasn’t passed by any lefties or greenies. They know a sure-fire vote in the bank when they see one. Give us your young, your poor in knowledge and experience, your huddled teenagers yearning for relevance, the wretched refuse of your teeming schools. And we’ll wallow in power for ever and ever.

Thus, to the specific common or garden knowledge; which, incidentally, most parents experience firsthand? Young people take considerable time to grow up. That’s why they’re often told: Grow up! Here, at random, is Britannica, one source from many:

Though the brain may be done growing in size by the teen years, it’s not done developing and maturing. The prefrontal cortex, which is responsible for skills like planning, prioritization, and impulse control, may not finish developing until the mid- to late-20s.

Here’s another source: From age 22 “rational thinking develops with prefrontal lobe maturation”. This maturation is reported to finish at about age 25. How about ages 15 to 17? “Height of identity crisis…May engage in risky behaviours.” As an aside, the ideal time methinks for demonic forces to affirm gender dysphoria and chemically and surgically mutilate young bodies.

Look where you will, the science of brain development is settled. Where have I heard that before? Never mind, in this case it’s as true as you’re going to get. At question is whether you want to allow those whose prefrontal cortex is years away from fully developing to vote. To support his argument, Williams lists a number of things those aged 16 and 17 can do, like leaving school, getting a job, and enlisting in the defence forces. How silly can you get?

What skills and experience do you need to cast a vote which may change the course of the whole country? That’s the question. That’s a bit different from leaving school and getting a job. Or Boxing. Or joining the military, which is often employed as the ploy to justify lowering the voting age. Carrying a rifle and risking your life entitles you to a range of considerations but not to an assumption that your brain is sufficiently developed to understand the implications of voting this way or that.

You might detect that it’s not simply that I believe Williams to be wrong but that his argument lacks intellectual rigour and common sense.

March of the Ballot-Box Mendicants