The Appeal and Peril of Bended-Knee Diplomacy 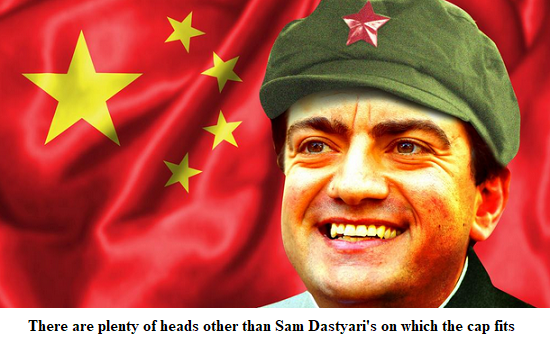 One of the great advantages of awful politicians who become foreign ministers is that much of the time they are out of the country and far, far away from us, indulging in the bulldust that is the stuff of international relations.  Two recent examples are Marise Payne and, of course, the current incumbent.  Sometimes the role is offered as a reward for not making the top job, a silver medal of considerable prestige.  If Malcolm the Second had had an ounce of decency, he would have offered the job to Tony Abbott, as Bob Hawke did with Bill Hayden.

In any case, so far Wong has done a half-reasonable job, visiting all the places that you would expect.  But … she is trying to appease China and to blame the recent fractious relations with that nation on the Coalition.  The Coalition led by Turnbull and his unfortunate successor, Scotty Wotisname, can be blamed for many things.  Indeed, to list them would require a book-length treatment and need not detain us here.

I assume that Wong is (perhaps cleverly) trying to steer us back to some kind of realpolitik relationship with the Chinese Communist Empire by putting the blame for our recent “falling out” on ScoMo.  To “stabilise” the relationship, Wong explained,

We spoke frankly and we listened carefully to each other’s priorities and concerns. As you would expect, I raised a number of issues in relation to bilateral, regional and consular issues.

Delightful foreign-policyspeak.  Talking points.  Music to the ears of The Guardian and the Marrickville class.  And so on and so forth, blah blah blah.  Wong met Wang and from that encounter the boilerplate was thick.

Fact is, the enthusiastically capitalist and imperialist China of Xi Jinping is an evil regime, now sharing international not-so-soft power, agreeably, it seems, with that other awful enterprise, the World Economic Forum.  A joint enterprise that the German-based, American playwright and commentator CJ Hopkins aptly calls “globocap”.  Someone once described imperialism as the highest form of capitalism.  Who’da thought that Communist China would turn out to be the greatest example of the genre?  Karl Marx – no stranger to the benefits of capitalism, supported as he was in his endeavours with Friedrich Engels by the latter’s industrialist old man – would be spinning in his Highgate Cemetery grave.

It is a question of import just how liberal democracies should relate to evil regimes, especially when they are crucial trading partners.  Pragmatists in DFAT (the very apt acronym for our Department of Foreign Affairs and Trade) would be cheering Wong’s efforts.  Probably they are writing the entire script.  Gareth’s Gazebo (the home of DFAT built on Senator Gareth “Biggles” Evans’ watch) is populated with those who are both leftist and international relations bulldust junkies.  On it goes.

But to blame the previous Government for the deterioration of relations is to misread wilfully recent history, and, worse, to miss the far bigger picture.

Before Xi Jinping came to ultimate power, and going back probably to Kissinger and Nixon, the West has disastrously missed the China plot.  They and many others thought China’s unexpected adoption of economic rationalism would inexorably lead to liberalism.  Oops!  They got that very wrong, indeed.  The China optimists in Washington (in particular, Bill Clinton, then Bush 43) went much further, and eased China’s entry into the World Trade Organisation (in December 2001).  The rest, as they say, is history.  A very useful guide to this miserable process was provided by Stewart Paterson in his invaluable book, China, Trade and Power, 2018.

Appeasement of China has been ongoing, and ever increasing, despite the mounting evidence that the earlier optimism about China’s pathway to liberalism was utterly flawed.  And it wasn’t just simple-minded optimism.  There was cheer-squadding on an industrial scale, and by both political parties in Australia.  A whole generation of ex-politicians on the make, wishing to secure their superannuated lifestyles and maintain relevance, found much of their retirement wealth and glory in backing China:  Bob Hawke,  Paul Keating,  Sam ‘Shanghai Sam’ Dastyari,  Bob Carr,  Andrew Robb … the list is a long one.  It has been utterly disgusting.  Bob Hawke, famously, shed tears over Tiananmen Square in 1989.  The mood didn’t last.  Then there are the Beijing Bidens.  The Johnsons (as in Boris and family, as Mark Steyn has pointed out of late).

But there is more.

On the watch of both parties and of the useless, nay positively dangerous, Foreign Investment Review Board, we have invited the Chinese Communist Party into our country.  Core, strategic infrastructure, gone.   The ports of Darwin and Newcastle, gone.  Farms, gone.  Prime real estate in our capital cities, gone.  We craved foreign direct investment (as well as endless mass immigration) to underpin our economy.  Well, we have, sure as hell, got it now.  And still, we wait for China to embrace the liberal values which would make our strategic sucking up operation seem worthwhile, and justifiable.  Values that we ourselves have abandoned these past two years as we sought to emulate China’s regime in relation to managing the virus China created and dispersed.  Beijing laughs.  As well it might.  Things are going to plan.  The West is lost.  And, of course, Trump gone.

What Wong is effectively defending here is the sorry record of obsequiousness to The Middle Kingdom, a regime whose vile domestic policies – who in the new government will defend social credit, I wonder? – and its blatant international ambitions are a threat to what is left of the Free World.  That Jacindarella is playing the same game should immediately indicate its motives and its destiny.

Ronald Reagan’s view of the Cold War, post the regrettable detente policies of Kissinger and Nixon, then Jimmy Carter, was that “we win, they lose”.  The Gipper was right, and it worked.  Of course, we had, in those days, international relations giants at the helm:  Reagan,  Thatcher,  Pope John Paul II.  Not so much, now.  Is China a friend or an enemy?  Well, they already own most of our country.  We have well and truly made our Chinese bed. And now, we seem destined to lie in it.  Do we care?

Wong is wrong on the little picture and, more importantly, the big picture.  But she is of a political class wedded to the globalist agenda in which China is a “partner”.  We should not have expected less.  If Morrison and his cohort had had a clue, they might have tried a little harder to adhere to Reagan’s Law.  I wonder if the Coalition, now in opposition, will ponder these matters.

11 thoughts on “The Appeal and Peril of Bended-Knee Diplomacy”

Looking Through a Stethoscope