China, Dutton and the Common Destiny of Mankind 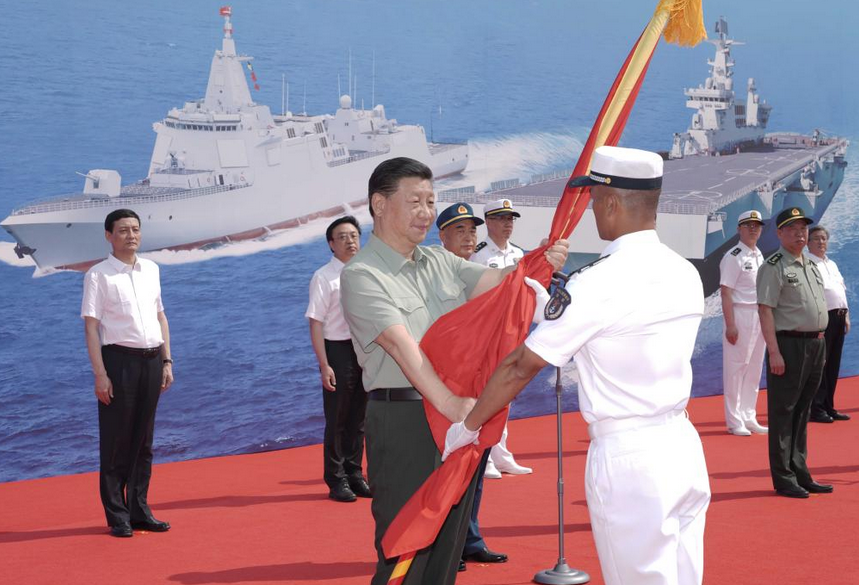 The federal election result is a bad outcome at the worst of times. Quadrant has been pointing out for more than two years now that China under Xi Jinping has morphed into a predatory imperial power with designs on our region. Yet even though a week before election day a Chinese PLA naval warship with intelligence gathering capability was detected tracking the Western Australian coastline, the issue was only of minor interest to the contenders for Prime Minister. It was of even less concern to our news media. Indeed, if this provocative venture had not been publicised by Defence Minister Peter Dutton it probably would have gone unnoticed in the campaign.

The vessel was detected near Exmouth, off the coast where the joint Australian and United States naval intelligence station, Naval Communication Station Harold E. Holt, is based. The Chinese came into Australia’s Economic Exclusive Zone but ignored international protocols to advise Australian authorities of their presence. After the vessel was detected, it tracked north up the coast towards Darwin.

Dutton called a press conference to reveal its presence, which he called “an aggressive act” and “very concerning”.  He said: “It is obviously very strange that it has come this far south and it is hugging the coastline as it goes north. Its intention will be to collect as much electronic intelligence as it can, and, as I say, that is unusual. We are monitoring it very closely. We have a number of aircraft surveilling this particular warship.”

Fortunately for Australia, Dutton survived the election with his seat of Dickson intact. He is by far the most mature and reliable guardian of Australia’s defence and security in the parliament and a direct contrast to the Labor Party’s former Shadow Defence Minister Richard Marles, whose political response to China’s previous provocations was appeasement. It will be the nation’s dire misfortune if the remnants of Dutton’s party do not elect him Leader of the Opposition in the coming days.

What follows is my column in the forthcoming June edition of Quadrant magazine outlining the environment of international affairs in our region that the new government will have to face.

In 1974, Mao Tse-tung set out his vision of global inequalities of wealth and power in the “Theory of Three Worlds”. His category of the First World was occupied entirely by the USA and the USSR, both of them, in his definition, predatory imperial states. Mao placed Australia among the countries of the Second World, along with Canada, Japan and most of Europe. Second World countries, he argued, were not poor but were dependent for their livelihood and security on one or the other of the First World goliaths.

Mao defined his own country as a member of the Third World. This comprised the great majority of the world’s countries then languishing in dire poverty throughout Africa, Asia, South America and Oceania.

Mao’s political prescription for resolving this global oppression was anti-imperialist nationalist struggle through warfare and revolution. His goal was to create a movement to unite the whole world under his leadership in a combined force against the two superpowers.

Fortunately for China and the rest of the world, his death in 1976 saw his grand vision discarded. Instead, the strategy initiated by Deng Xiaoping in 1978, and followed by his successors for almost four decades, gave China a state-driven capitalist economy. As a result, Deng turned the Chinese economy completely around. It went from being one of the poorest countries in the world to the second-richest. Although Deng preserved the Chinese political model of a one-party state that would tolerate no dissent, he discarded Mao’s Marxist ambition to be the great liberator of the wretched of the Earth.

However, since Xi Jinping became General Secretary in 2012, he has steadily revived the imperial yearnings of the Maoist era. Xi, like Mao, envisages a time when he or his successors will be the leaders of the world.

Quadrant published a definitive analysis of Xi’s ambitions in April 2020. Written by Michael Evans of the Australian Defence College in Canberra, it showed the influence on Xi of a group of Chinese intellectuals, including a former People’s Liberation Army officer, Liu Mingfu, and the Dean of International Relations at Tsinghua University, Yan Xuetong.

Liu’s book The China Dream: Great Power Thinking and Strategic Power in the Post-American Era (2010, translated 2015) prescribes a national strategy for China to take the place of the United States as the world’s dominant superpower. In the field of international relations it has been widely recommended as the definitive work on China’s strategic goals for the twenty-first century. Yan’s more recent book, Leadership and the Rise of Great Powers (2019, translated 2019) is an analysis of the transformation of power away from the world’s liberal democracies towards other structures whose time, he says, has come.

Yan, who describes himself as a “neo-communist”, argues that the West is suffering a crisis caused by a loss of civilisational confidence in its social infrastructure. By 2030, Yan predicts the American-dominated unipolar world of the post-Cold War era from 1989 to 2019, the Pax Americana, will break down in a contest between China and America for superiority:

China and the United States have more strategic interests in East Asia than in any other region, including Europe. China cannot achieve the goal of national rejuvenation unless it becomes the dominant power in East Asia. Likewise, the United States cannot maintain its world-leading status if it loses its dominant influence in this region.

Ultimately, Yan argues, this contest will encompass not only East Asia but the whole world. It will be decided not just by warfare but by which of the two powers can exercise the most effective form of governance in the twenty-first century. Michael Evans summarises Yan’s ultimate vision of a global polity dominated by Chinese one-party governance:

A new Chinese order, a “China model” of vertical meritocracy with superior leadership and based on what Yan calls “humane authority, sovereign state equality, and non-hegemony” will increasingly outperform Western democracy as the world’s most attractive political system. From Beijing’s perspective, as a new global configuration of “one world, two systems” evolves in the 2020s and 2030s, the “Yalta hegemonic world order” is likely to stagnate and die and to be replaced in mid-century by a new Chinese-led global system with the Orwellian name “The Community of Common Destiny for Mankind”.

Now, it is not hard to see in Yan’s vision an updated version of the utopian Marxism that dominated Chinese thinking under the rule of Mao. The Deng model confined to national development has now been replaced in the mentality of the Chinese Communist Party by ambitions to control the whole of humanity.

Anyone who thinks that this left-wing fantasy is most likely to be contained within China itself and its closer subjugated states, as it was during the Cold War, should read the intellectual literature now that it is readily available in English translations. China is not just ambitious for control of East Asia. It expects its influence will soon extend to the whole of Oceania, that is, the island nations of the North and South Pacific.

In particular, China regards the Pacific Islands within Australia’s sphere of influence as strategic stepping-stones for its overall plans. The agreement signed in April with the Solomon Islands is only the first of many that China plans to make.

The logic of this projected move is laid out in several papers and reports produced by the National Centre for Oceanic Studies at the Sun Yat-sen University in Guangzhou. The head of the centre, Yu Chang Sen, produces reports on developments that concern China’s interests in the region and gives papers on issues of Chinese strategy that should concern all Australians.

For Australians, Yu’s most dramatic claim is that, because these islands are located in the sea routes between China and South America, Australia, New Zealand and Antarctica (where China now has four “scientific” bases), the maritime security of Chinese fleets are at risk. This is allegedly because the US has defined a “second island chain” in the region that restrains the freedom of manoeuvre by the Chinese People’s Liberation Army Navy.

In a paper to a conference in Samoa, Yu summarised Chinese maritime strategic priorities as: safeguarding national sovereignty, protecting marine rights and interests, maintaining the security of sea lanes, establishing a stable relationship of great powers and marine order. For these purposes, he said, China was dedicated to building a powerful blue-water navy. As a big country on the Pacific Rim, he says China has naturally oriented its naval policy to the Pacific Ocean. However, in doing so, it has found its strategic activity stymied by the “invisible hands” of the alliance between the United States, Japan and Australia.

Yu complained that during the Cold War the US constructed three types of Pacific island chain networks against the Soviet Union and China, which are still in place today. The second of these island chains was called the Southwest Pacific Network, which extends from Guam across Micronesia to New Zealand and Australia.

As a result, he said, an “arc base” had come into being, in which the Tasman Sea, the Coral Sea, the Arafura Sea and other waters remained under tight control by the US-led alliance. This arc base played a crucial role in enabling the US to maintain a strategy of containment and deterrence against the Soviet Union and China. Although the Soviet Union has now been “sidelined by history”, this type of defensive network remains active since China is still considered a potential threat to regional security.

However, Yu argued, China’s modernisation of the People’s Liberation Army Navy and its ambitious strategic objective of building a real blue-water navy for “offshore active defence” now required it to “achieve substantial breaking-through in undermining” the US second island chain. Yu said this was now a crucial imperative for China: “Its maritime great power dream will not come true if the second island chain remains intact.”

Now, Professor Yu is an academic and, although he must be a loyal party member to hold his position, he is not part of the Chinese government itself. So it is quite reasonable to ask how much of what he says here is a reliable guide to Xi Jinping’s actual policies.

Well, there is one thing about the Chinese Communist Party you can rely upon. If someone makes a statement that its government does not want publicised, its censors will go to work straight away. The fact that policy analyses and recommendations by Yu and the other authors mentioned above are still on the internet for all the world to see is itself testimony that what they say is in accord with party intentions.

In short, for Xi Jinping to fulfil his ambitions to give the world a common destiny, he expects Australia and our Pacific neighbours to abandon our existing security alliances and become tribute states of a new Imperial China.

Islam in Australia, the Path not Taken