Pique in the Name of Principle Equals Self-Harm 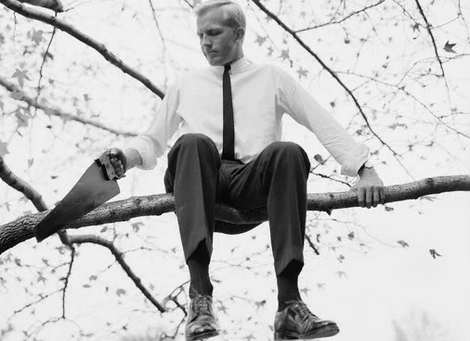 The Australian Christian Lobby (ACL), according to a report in The Australian, is promising to campaign against certain Liberal Party MPs in the May 21 election. Martyn Iles, ACL managing director, is targeting Liberal MPs who voted against Scott Morrison’s religious freedom legislation, hoping to unseat those “rebels” who have “endangered the ability of faith-based educators to teach in accordance with their ethos”.

But conservatives voting for Labor as an alternative to individual untrustworthy Liberals?

Any party putting forward Senator Penny Wong as its prospective minister of foreign affairs might be something worse than untrustworthy. Anthony Albanese, as the leader of the party, must take responsibility for this. After all, as recently as July last year, Senator Wong was waxing lyrical about Whitlam’s legacy and the “agency” Australia achieved through his embrace of Communist China, and the championing of “multilateralism” by the political class over the past half century. True, Liberal prime ministers such as Malcolm Fraser followed Whitlam’s lead, but that was then and this is now. We all make a mistakes and yet it is another matter altogether when Penny Wong refuses to own up to her past errors of judgement.

Does Wong not comprehend Xi Jinping’s determination to create China’s own version of Imperial Japan’s Greater East Asia Co-Prosperity Sphere, the new PRC-Solomon Islands military pact just one case in point? The senator from South Australia, naturally enough, found a way to criticise the Morrison government last year at the founding of AUKUS, an alliance which signifies a dramatic break with 50 years of ignoring geopolitical reality. And, of course, she supported President Macron’s grievances about us ditching diesel-powered French submarines. Here we are on the cusp of a Second Cold War (or worse) while she remains a party hack guided by 1970’s-style multilateralist fantasy. That sort of nonsense should have been scrapped somewhere around the time Beijing began militarising the South China Sea and threatening Taiwan with the People’s Liberation Army Rocket Force.

The incapacity of a Federal Labor government to protect Australia’s sovereignty, even in business-as-usual peace time, was amply demonstrated during the Rudd-Gillard-Rudd (2007-13) era with illegal maritime arrivals. As I outlined in “How Boat People Sank Rudd and Gillard” (Quadrant, July 2014), Labor’s obsession virtue signalling beckoned the people smugglers of the world to our neighbourhood. If Kevin Rudd and Julia Gillard could not stand up to the Labor Left then, what chance does Albanese, a member of the Labor Left, have? A new suit and glasses has turned this fellow into a genuine leader at a time of international crisis. Really? It is hard to shake off the memory of Albanese chastising Morrison for offending Xi Jinping “for offence sake” back in 2020 as the ink now dries on the new China-Solomon Islands Pact. The Opposition leader, perhaps to square the circle of his fantastical Labor Left worldview, is blaming the Solomon Island deal on Morrison’s “lack of action on climate change”.

Given his radical ideology, Albanese’s best option might be to repeat Kevin-07’s tactic of seeming normal. Nevertheless, Labor strategist Cameron Miller is already suggesting that the Opposition Leader “can’t afford to stay a small target”. The worry, apparently, is that an “Anthony Albanese void” will not give swinging voters a reason to elect Labor and only attract a protest vote against the Liberals. That is where the ACL campaign might play out.  Albanese, risibly, kicked off the six-week election campaign by promising to “lead with integrity” and treat us with “respect” if he becomes PM: “I won’t go missing when the going gets tough.” But the Opposition Leader with the “Anthony Albanese void” went missing before the election started. 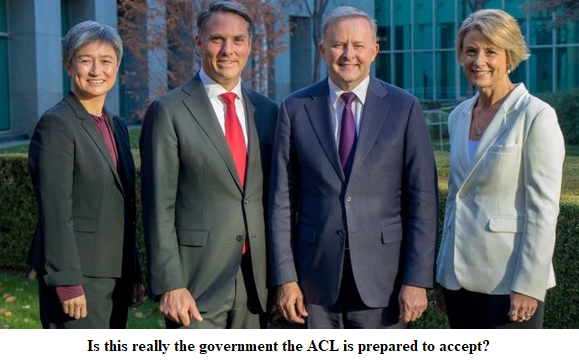 WHAT what to make of Martin Iles’ initiative to encourage the ACL’s 259,000 members, including its 7,700 “volunteer army”, to target a list of ultra-progressive Liberal MPs: Dave Sharma (Wentworth); Bridget Archer (Bass); Fiona Martin (Reid); Trent Zimmerman (North Sydney); and Katie Allen (Higgins). Given that the some of these seats are in jeopardy and the federal election is likely to be a close call, it is not inconceivable that the ACL will play a role in bringing the low-profile Anthony Albanese to power at a most precarious moment in international developments.

It’s not hard to seriously question the election strategy of Martin Iles – as a Christian and, obviously, a conservative of some variety – to invest the ACL’s money and reputation on helping Labor  Maybe Iles could reflect on the time the ACL endorsed Kevin07 for the prime ministership. Rudd turned out to be not only the equal-worst Australian leader in living memory, actually dis-endorsed by his own party before the 2010 election, but an outspoken critic of the type of Christians Mr. Iles represents.

Should we, as conservatives and/or Christians, keep supporting the Liberals come hell or high water simply because the alternative is too dreadful to contemplate? Or should we simply bite the bullet? Iles, in his interview with The Australian, makes this claim: “If that means [Christians/conservatives] have to cast a vote which makes them uncomfortable in the short term but (creates) a longer-term opportunity for a Coalition to reflect and rebuild – I am encountering many people happy to do that.” A lot of people, not only progressive or ‘moderate’ Liberals but some conservative Liberals as well, will be angered by Iles’ stance.

Having stood as the Family First Party (FFP) candidate for the Legislative Assembly seat of Bragg in the March 19 SA state election, I know something about that anger. The local Murdoch tabloid, The Advertiser, which supported the re-election of Steven Marshall’s Liberal government, came very close to accusing the (the resurrected) FFP of being a Labor front because (a) its two founders, Jack Snelling and Tom Kenyon, were ministers in a previous state Labor government and (b) Family First was preferencing the Labor candidates in two marginal seats.  On the possibility of Snelling and Kenyon being Labor stooges, the reality is – as anybody who knows anything about the ALP – the Labor Party possesses certain cultish qualities, including the one about the price for apostasy. As for the first point, David Penberthy, in a subsequent article for The Australian, drew a fairer picture of the situation by acknowledging that in adjacent marginal seats the FFP was preferencing the Liberal candidate. The reason for the discrepancy was entirely based on the voting record of sitting members on the abortion-to-birth “reform” championed by Vicky Chapman, former Liberal deputy premier, attorney general and, yes, the sitting member for the state seat of Bragg.

And yet, as Iles correctly notes, what happens if a Liberal “moderate” (Liberal radical would be more apt) is your local member. As I have written elsewhere, “Vote for the conservative candidate!”, who exactly should we vote for if the options are: (1) a progressive Liberal candidate such as Vicki Chapman; (2) a progressive Labor candidate; or (3) a progressive Greens candidate? This, obviously, is a trick question since the answer is (4) Daryl McCann, candidate for the Family First Party. As it was, I had the time of my life campaigning and finished up winning 5 per cent of the vote (twenty percent more than my goal if you will allow me to play with statistics) and maybe shifted a few votes in the direction of FFP’s Legislative Council candidates.

Of course, there is always the possibility of (re-)joining the Liberal Party and fighting it out with the ‘moderates’ for conservative principles (e.g., against abortion-to-birth, gender ideology, mandatory vaccination and encroachment upon faith-based education).  After he lost the March 19 state election, outgoing Premier Marshall spoke about the Liberals needing to remember it was a ‘broad church’ and that conservatives, presumably, should be welcomed back into the fold despite being increasingly marginalised over the past four or more years. That said, I can longer have blind faith in the Liberals and I hope there’s a place in the future for the fledgling FFP, even if it was without the resources to contest the May 21 federal election.

Martyn Iles is obviously right to say that conservatives reflexively voting for the Liberals at every election, state and federal, has its problems. It leads to a state of affairs in which the ALP does not even try to win the conservative vote and Liberals take the conservative vote for granted. In the case of the Senate, and the Legislative Councils in state upper houses, proportional representation allows for minority parties to play an important role. It is a different matter in the House of Representatives or the state lower houses. To preference the Labor candidate above the Liberal sitting member, as Martyn Iles is encouraging members of the ACL, is possibly tipping the balance in favour of Senator Wong becoming Australia’s next Minister of Foreign Affairs. Here is Iles’ pre-emptive response to that scenario contained in the latest missive to members of the ACL:

A Labor win may result in a more rapid downward spiral of social engineering, but it will also show the Coalition they cannot treat Christians with indifference and expect to win. A Coalition win may mean they forever miss the opportunity to reflect and reform, and the Liberal Party will continue to deteriorate in its principles.

Still, any reasoning that involves helping Anthony Albanese into The Lodge and “a more rapid downwards spiral of social engineering” has, with due respect to Mr. Iles, gone badly wrong somewhere along the line.