Wan Secularism Is No Match For Islam

Is it well worthwhile watching and listening to Linda Sarsour. She is the former executive director of the Arab American Association of New York. This organisation has links through Qatar to the Muslim Brotherhood. She is an American born of Palestinian parents. She was a Bernie Sanders supporter and played a leadership role in the Women’s March in Washington, organised the moment Donald Trump won the presidency.

Apparently, she was invited seven times to the Obama White House. She is part of the grand and noxious alliance between the Left and Islam. Here, in Australia, think of left-faction Labor luminaries lining up with Islamists to throw Israel to the wolves.

By the way, advisedly, I said ‘watching and listening to’ Ms Sarsour, rather than just ‘looking her up’. The lady is resolute and you fully realise that only by seeing and hearing her speaking. She absolutely knows where she stands, gives no quarter, and is not the least bothered by engaging in racial stereotyping.

Switch to defenders of Western civilisation who speak with the same forthrightness? That’s right, where are they to be found? Well, maybe Marine Le Pen or Geert Wilders among politicians or Pamela Geller and Robert Spencer among US commentators. But there is a big difference. All those who I have mentioned are shunned, as extreme, by polite Western society. Geller and Spencer were refused entry into the UK in 2013. By contrast, Sarsour is embraced by mainstream Muslim society and by the Left at the highest levels. 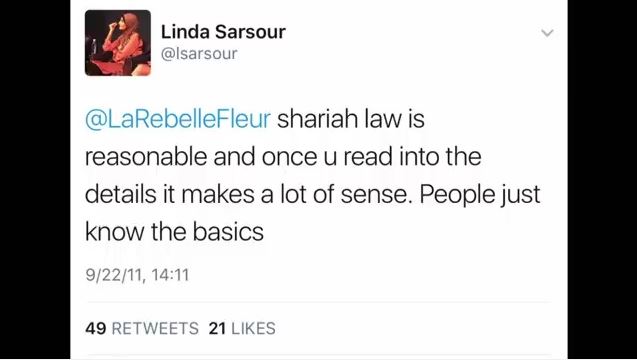 Sarsour is not at all shy about invoking Allah in secular matters. There is nothing strange about this in an ideology which has no separation between mosque and state. Herein lies the problem for the non-Muslim rest of us.

The strength of Western enlightened society has been its secular nature. Church and state are separate in nations built on Christian values. These values allowed capitalism to flourish and bring about unimagined prosperity. However, part and parcel of such values is to let discordant voices be heard. Freedom and tolerance — a strength — has become a chink in the armour.

Conservative commentators fall over themselves to be balanced and fair when faced with an imam carrying the religious equivalent of Mein Kampf in his back pocket. (‘Oh, I am sure you wouldn’t personally beat your wife even though you are prepared to stand by the words of Allah, which precisely instructs husbands to beat their disobedient wives.’) And so, the contradiction, along with many others, wafts away into the ether never to be chased down.

An irreligious, multicultural, society is ill equipped to defend itself against the menace of religious fundamentalism when those embracing such fundamentalism are part of a rapidly growing minority group. It can’t be done. The menace simply grows. It grows because there is no effective counterweight.

Muslims enjoy and suffer the same experiences as do we all in everyday life. But there is more to them. They live out the possibility of an afterlife. Whereas this is all there is for your average Joe or Jill.

Most of those I know outside of my church live totally secular lives. Secularity is their beginning and end. And, in the past, most of the people I have worked with fit the same mould. “In my religion [Catholicism], they say, act as if ye had faith. Faith will be given to you,” said Paul Newman in his closing address to the jury in the 1982 movie, The Verdict. These days even pretence is falling by the wayside. According to the 2016 Census figures, those declaring that they have no religion has steadily risen from less than one percent fifty years’ ago to 30% now.

The battle is unequal. Those who believe in nothing beyond this mortal coil are no match for those inspired by religious faith, however flawed is its casting, script and provenance. The battle could be engaged, maybe, if the diminishing Christian alter ego of Western secularity were muscular. Unfortunately, from its leaders down, feckless appeasement predominates.

Extrapolate from the trend over, say, the past thirty years to thirty years ahead. The omens are bleak. They are bleak not just because of declining Christianity but also because otherwise astute people are oblivious to the dangers ahead. Speak to people who know or work with Muslims. They are just like us, they usually say.

They are not. They are not spiritually vacuous vessels. They just look like us. They are Linda Sarsour’s future disciples in disguise.

editor’s note: The tweets reproduced above were lifted from a YouTube clip featuring a collection of Linda Sarsour’s social-media pronouncements. In addition to her frequent and quite vicious attacks on Ayaan Hirsi Ali, the video is instructive for the unqualified support she garners from a variety of useful idiots, starting with Bernie Sanders and descending from there to various champions of Hollywood and media groupthink. The full clip can be viewed via this link.

Groping for a Story at the ABC