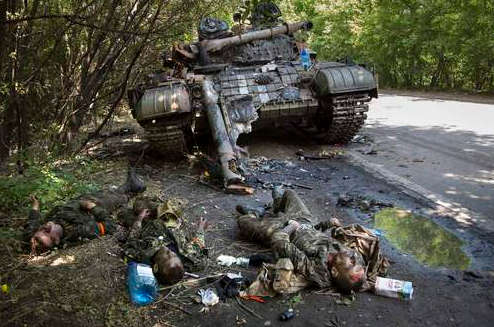 “A man who starts a war enters a dark room.” I sent out this quote in a tweet a few weeks before the start of the full-scale Russo-Ukrainian war. To avoid any possible misunderstanding, I pointed out that though the words were those of Adolf Hitler whom I would normally quote only to condemn, he had nonetheless established an impressive reputation as an expert on war. And I added: Vladimir Putin, take note.

Apparently, my influence doesn’t extend to the upper reaches of the Kremlin. On February 24 Putin launched his invasion of Ukraine and entered a much darker room than both he and his enemies expected. He is thought to have foreseen a lightning advance on Kiev that would last three days, be welcomed by the Ukrainian population (garlands, confetti, kisses), and climax in a victory parade for which Russian soldiers had already packed their dress uniforms. Most Western experts then forecast a longer campaign and a less welcoming victory—but a victory nonetheless.

Almost three weeks later (at the time of writing), those predictions look absurd. The latest estimates of deaths, refugees and destruction of property (gleaned from several sources) in the war are roughly 6000 to 12,000 Russian soldiers killed, 4000 to 6000 Ukrainians killed, 2.7 million refugees, and $119 billion worth of property damage.

Those estimates are already out of date as I write. His blitzkrieg having failed, Putin has now changed his strategy to a more traditional Russian one of pulverising Ukraine’s cities and their civilian inhabitants as much as their defence forces by heavy missile and artillery bombardment. Deaths, casualties and destruction are therefore rising fast and likely to get far worse.

And yet, still in mid-March, Putin was far from ending the war, let alone being able to claim a victory. Indeed, when commentators write that Putin has already lost, what they mean is that even if he eventually conquers Ukraine by bulldozer tactics, he has lost most of the aims he hoped to achieve at the outset. The important exceptions still are improving Russia’s geo-strategic position around the Black Sea and making Ukraine a landlocked and failed state. Even those objectives, however, are still up for grabs.

What, then, are the tentative lessons of this unfinished war?

The first lesson is one old soldiers never forget. It is that a day of reconnaissance is worth a month of fighting. When on the eve of attacking Budapest Stalin asked a general how long it would take to capture the city, he was told “a week if I have a day of reconnaissance but a month if not”. Stalin demanded an immediate attack. The siege then lasted two months at an enormous cost in death and destruction, including 80,000 Soviet casualties.

Applying that lesson here, Putin failed to get proper reconnaissance of the Ukrainian forces likely to resist his invasion, or to investigate the state of the Russian army that would prosecute it, or probably both. The nervous reluctance of his intelligence chief at Putin’s war council to support the “special operation” with the proper enthusiasm certainly suggests so.

So do the two plainest facts about war so far: first, the Ukrainians have proved well trained, better equipped than the Russians expected, encouraged by both their political leaders and the civilian population, and as a result brave and effective in fighting; and second the Russians have been slow-footed, caught by surprise too often, damaged by low morale, seemingly either ignorant or misled about their mission, and overall unable to attain their objectives in a timely fashion or at all.

Politicians and commentators (though not the intelligence services) in the West have been repeatedly, if pleasantly, surprised by the performance of both armies. We are therefore less frightened of Russia’s conventional armed forces than we were before February 28. Our logic is that if Ukraine’s forces can hold them at bay so well, NATO’s larger and more sophisticated forces have little to fear from them.

Putin may think so as well. If so, he must also be nervous that cities like Kiev might not fall to Russia’s pulverising tactics without the kind of losses that the Red Army sustained in the urban warfare of Berlin and Budapest. For he doesn’t seem to have the reserves of manpower needed to replace such losses in fighting such a war. That’s why he’s calling in all manner of revolutionary and jihadist riff-raff from around the world to employ in Kiev the tactics they’ve made famous in Syria and Libya.

His image as a conservative and Christian defender of Europe’s traditional religious values has taken quite a knock. One wonders what his Orthodox priest will say to him in Confession.

The second lesson: expect the law of unintended consequences to frustrate and even reverse your objectives once the balloon goes up. In addition to turning Ukraine into a buffer state between NATO and Russia, Putin’s war aims included dividing NATO in three ways: keeping Germany a semi-pacifist, energy-hungry, near-ally of Russia, splitting the US from Europe, and ensuring that countries such as Sweden and Finland abandon all hope of entering NATO. He would have accepted that their first reaction to his blitzkrieg would be hostile, but that its early success would ensure that any hostility would fade away when it seemed pointless, as before over Georgia and Crimea.

Instead, Putin is bogged down in a major war against an opponent formidable enough to inflict serious losses on his forces and to prevent Russia winning outright. Not winning, however, is the least of his worries. Unfortunately for him, the whole world is watching as he demonstrates the terrible reality of a ruthless war waged by criminal tactics in a modern European country to advance an illegal policy. It’s not a sight that modern public opinion will easily forget.

As a result, NATO and the EU have both unified around policies of increasing defence spending, reducing Europe’s reliance on Russian energy, defending democracy, and in general seeking to revive the reality of “the West”. Germany has reversed the Merkel-era policies that benefited Russia on a range of issues. Countries that had been almost frightened to think of joining NATO such as Sweden, Finland and Moldova have now been frightened into announcing that they will probably apply to do (and getting hostile Russian reactions). Even the Biden administration has committed itself to re-constructing a strong Atlantic alliance—as it is wise to do in a world in which an increasingly powerful China wonders whether its friendship with Moscow was mistaken as well as ill-timed.

Does China benefit more by having a weakened Russia as its junior partner in geopolitics than it loses by taking its side against a reviving Western alliance that has shown its formidable financial power in sanctions policy? That’s the choice for Beijing. And it’s a nice question—unless, of course, you happen to be Vladimir Putin.

The third lesson is that the West’s doctrine of nuclear deterrence needs re-thinking and re-stating. Partly because of the poor performance of the Russian army, Putin has made vague threats of a nuclear response to any Western intervention in the war such as a “no fly zone” to help Ukraine. It’s almost certainly an empty threat because a nuclear attack from Russia would get a devastating nuclear response from NATO. But it must be taken seriously because Russian war-fighting doctrine holds that tactical nuclear weapons should be used in order to avoid an existential defeat—something that Putin might interpret broadly.

Re-stating a doctrine of nuclear deterrence needs to be done, but it can’t happen in the context of the Russo-Ukrainian war. Until it does happen, however, and maybe afterwards too, NATO countries—especially those member-states next to Russia—and new applicants such as Sweden will have to greatly strengthen their conventional armed forces and their alliance co-operation in order to deter Russia solely by conventional weapons.

That’s likely to prove expensive and to require firm public support across NATO. Thanks to the evidence that this war has given us of Russia’s real military capacities, however, it’s a more realistic policy than it might have seemed a month ago.

That brings us to the final lesson of this unfinished war: wars matter to the locals more than to anyone else. It’s the successful resistance of Ukrainians from the heroic President Zelenskyy to the newest raw recruit in Kiev that has made the choices discussed here realistic and not merely theoretical ones.

How will and should the war end? The ends on offer apparently include a Russian defeat, a negotiated settlement of some kind, and a Ukrainian military defeat followed by a long guerrilla resistance that certainly weakens Russia and probably restores a sovereign Ukraine. All these are realistic possibilities.

Only the first raises no major moral questions. We should all welcome it—including, one hopes, eventually the Russian people. A negotiated settlement, whatever its weaknesses, would at least end the killing. If it would also restore Ukrainian sovereignty and show clearly that Putin’s adventurism has failed, it would be the best possible outcome. A Ukrainian defeat would plainly be a tragedy—one made more tragic by a guerrilla resistance with all its pains and ambiguities but perhaps also a tragedy redeemed by eventual success.

My sense is that these choices will be made by Ukrainians. Whatever assistance they’ve provided, outsiders should not want to fight to the last Ukrainian nor to insist that any negotiated settlement must be tailored to wider international interests. And if we try to determine these things, Ukrainians on this occasion will ignore us and decide for themselves.

An Ever-Mutating Strain of Anxiety