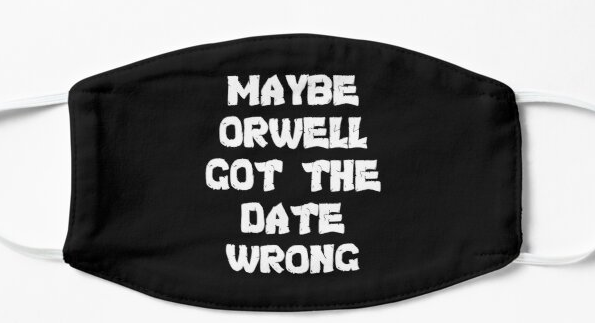 Who will rid us of these pestilent premiers? No one of course. The fix is in. Lockdowns, masking and vaccine passports have the abiding loyalty of colleagues, oppositions and media bigwigs. They speak with one voice. Those inclined to deviate from the party line cave. All are too weak and afraid that each “tragic” death of an 86-year-old overweight diabetic with a dicky ticker would be laid at their door.

My view of things, which I’ll vent below, is simply my view. You might agree or disagree. Feel free. At least for the time being that is one freedom we have, provided we don’t try to broadcast dissident thoughts on social media. Most other freedoms have disappeared; been taken away.

They will come back you think. No, they won’t. Not real freedoms. What has so easily been taken away without protest, with obsequious thankful acquiescence in many cases, can be taken away again. The yoke might be removed in stages according to the dictates of Gladys or Dan and their ilk but it can be put back on at their whim, as it can on dumb animals.

Meeting friends, going to church, pub or theatre, attending weddings and funerals, traveling beyond 5kms from home; and, if you can still imagine it, travelling interstate and overseas, have all already morphed into privileges. It is important, I think, to understand what’s happened. I will start with the Prime Minister.

Scott Morrison talks about the Australian military being justifiably proud for having defended freedom in Afghanistan. At the same time, he is overseeing the greatest loss of freedom ever inflicted on the Australian population. Register his impressive ability to compartmentalise his thinking. Engaging in double-think, without the least sign of unease, is impressive. But then he is a pragmatist of the first order.

He has form. To wit: expressing Christian principles while callously pauperising part-pensioners. Bullyingly castigating Christine Holgate while remaining deafeningly silent on Louise Milligan. Praising our soldiers while describing untested allegations against some of them as “brutal truths.”

It’s unfair to single out Morrison. No Australian political leader, in government or in opposition, is worth writing home about. Donald Horne was prescient in the 1950s. We are now led by second-rate people. A basket of contemptibles? We have no Ron DeSantis or Viktor Orbán; and, certainly, no Donald Trump.

There is no comparison between the application of malign Sharia Law and the COVID restrictions imposed across Australia. Nevertheless, there is an irony to take away. The Taliban is known for preventing girls from attending school. Morrison has presided over a government which has allowed reckless state premiers to keep all children from attending school.

The Taliban outlaws public dancing. So now have we. The Taliban persecutes non-Muslims. Morrison and his posse of premiers are on course to ratify the outing and ostracism of people who refuse to have medical experiments performed on their bodies. The Taliban insists that women wear a hijab and, give them a day or two, a niqab (face covering). We have our own version of niqabs for all.

To repeat, no comparison. At the same time, credit where credit is due, the Taliban find inspiration in their religious faith. I happen to think that their faith is a crock. Still, they believe that they’re serving a higher cause.

At one point I formed the view that we, the people, had become sheep. That our forefathers were made of stronger stuff. I am no longer sure of that at all. Maybe we have always been sheep. What I think has happened is that implied and explicit social contracts have been torn up. Perhaps the modern age rather than the calibre of the populace accounts for that. In the past people had to work to eat. Now we are so efficient we can pay people to stay at home, lock them down, and still have plenty of bread to spare.

Laws must be applied equally to all, including to members of the government. We have already seen the way masking and lockdown laws have been flouted by those in charge here and overseas. But this is a minor breach in the scheme of things. Of central importance is that laws and regulations are in keeping with the popular will, are reasonable and defensible, and contain no capricious curtailment of individual freedoms. By definition this prohibits diktats.

What recourse do the people have if governments take upon themselves illegitimate power? Break the social contract. Rule by diktat. Well, they can vote in opposition parties, which would be likely backed by thundering newspaper editorials. Suppose oppositions and governments (and the media) are likeminded. Then what to do?

The government has the police, the army, the penal system. People have their careers, their families and their futures at risk. They can do little and will do nothing if they are well fed. It’s not a matter of them being sheep; even if some are more sheeplike than would have been previously imagined.

Freedoms don’t hang on parliaments and voting. They hang on an implied social contract that those with political power will not act despotically. In turn that comes from a culture with norms of behaviour bred over very long periods of time. That’s why you can’t liberal-democratise Afghanistan.

Freedoms have given rise to economic abundancy. Unfortunately, the current state of play in Australia and in other western countries suggests that a complexion of circumstances, necessarily including abundancy, have been instrumental in allowing freedoms to be taken away. By whom? By those with no higher calling than to exert power.

The race is not to the swift, nor the battle to the strong…nor riches to the intelligent…but time and chance happen to them all.

Evidently, second-rate politicians are no exception.

What if China Attacks?

Ukraine: Where News Goes to Die