Looking Through a Stethoscope 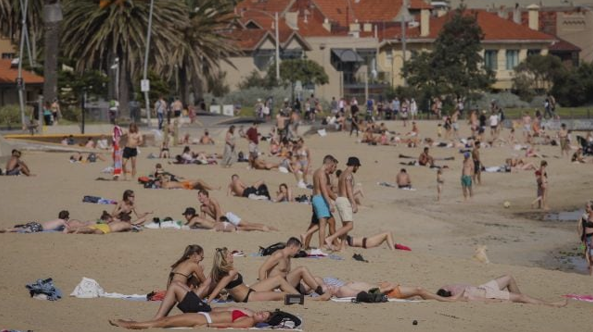 Let me re-iterate.  Our death toll stands at 16.  All were over 69 and many acquired the disease overseas; all had underlying health conditions.  Yet on Saturday we have The Australian with headlines like this:

Let’s accept that The Australian  is doing no more than reporting the news that NSW Premier Gladys Berejeklian is panicking. Fair enough, but ‘death toll rises’?  Really?  It went from 13 to 14.  This is no more than journalistic hyperbole that will do nothing to reassure people that, unless you are over 60 and with an existing medical condition, Wuhan virus will almost certainly not kill you.  But I guess ‘NSW put on notice as one more person dies’ doesn’t have quite the same  attention-grabbing power.

Berejiklian’s logic appears to be ‘Oh My God, infections haven’t immediately ceased.  We must do more.’   She claims that it is concerning that there are now some 150 cases of community transfer and we can’t source of each and every one of thm.  Why is that so perturbing when we are told  the infection can be contracted by touching an infected surface or by contacting an infected person?

On the March 19, shortly after the first stage of ‘lockdown’ (500 people outside and 100 people inside restriction) was announced, my wife and I travelled to Sydney for a small family gathering (nine of us) at Kingsgrove Hotel for my grand-daughter’s second birthday.  At 5pm the main lounge of the hotel had no more than 30 people in it.  We sat in a separate lounge with an open roof.  We maintained the social distancing rules.  During the two hours we were there, at any one time there would have been no more than five other people in that lounge.  So it seems to me that even that early in the Stage One lockdown, people were pretty much doing the right thing.  Ten days later we see the rate of increase of infection start to flatten out.

We hear a lot of rhetoric from second-rate State politicians, such as NSW’s Rob Stokes, along the lines that ‘if people don’t start to take the rules seriously we will have to impose stricter controls’.   Admittedly,  I don’t live in Sydney but all the evidence I can see is that, overwhelmingly, we are ‘doing  the right thing’. Photographs of police accosting individual people or couples at the beach tend to support my contention, if they are the worst examples of inappropriate behaviour.  Even the weekend’s example of 33 self-entitled medicos flouting the rules (probably the worst example so far) would not justify the current collective punishment.  It seems to me this rhetoric is nothing more than a pre-emptive justification for the further lockdowns these panicked panjandrums are prepared — indeed, likely — to bring into force. Here’s the Chief Health Officer Victoria, Brett Sutton. Worth noting is that, as late as February 13, Dr Sutton was banging the alarmist drum at a summit on the “climate change emergency“. As he has moved from one “crisis” to the next, observers might suspect the good doctor is prone to getting himself a tad over-excited. Here are his thoughts from a few days ago:

Some of the behaviour today — when we’re asking people to stay home — has been really crap. It’s hard to change habits and it’s hard to see dangers that aren’t apparent yet. But with 3,000 cases of COVID in Australia this week, we’re headed to 100,000 in 2-3 weeks without change.

Above this post is a picture of St Kilda Beach on Friday, before the local council banned all beachgoing and called in the police to keep them out. Many then took up their sun worship on an adjacent grassy area, where officaldom raised no objection.

Crazy? Well it has since grown worse than that. Today (March 31), Victoria banned sales of guns and ammunition, with the closest the responsible minister could come to an explanation being some incoherent bilge about the need to forestall  domestic violence. Out on the Bay, the Water Police are telling fisherman to get their boats ashore and themselves home. But back to the Port Phillip Council’s beach nonsense:  if we accept that some, maybe many, of the people in the photo are couples who live together, there does seem to be a fair degree of ‘social distancing’ going on.

The burning issue: why is our death rate so low?  If the current trend proves sustainable, it will make a mockery of the panic we are witnessing.  But is it sustainable?  No doubt there are a number of factors, as pointed out by various authorities, such as the much higher population densities in hardest-hit European cities, plus the older median age, and higher prevalence of smoking in, say, Italy. We also can’t ignore the distinct possibility that a major factor is that coronavirus arrived during our Australian summer/early autumn.  My brother is a doctor (albeit a dermatologist) and he expects the death rate to climb in winter, as it does for all other respiratory tract infections.  He also believes the virus cannot be contained, no matter how many anglers are ordered to return to the boat ramps  — in his words, ‘the genie is out of the bottle’. On that estimation one might argue that the current response is fully justified.

We can only guess how bad it might get in winter.  Could it be as bad as Italy or Spain, where Wuhan’s toxic gift to the world is said to be ravaging the residents of old folks’ homes in particular?  Who knows? The question is — or should be — how many deaths are acceptable?  We routinely accept 1500 to 3000 deaths a year from influenza without shutting down the economy or mandating social distancing rules. Here’s a hypothetical:  Let’s say we get only 2,000 deaths from the Wuhan virus – a not unreasonable prognostication on current trends.  Would we then re-institute today’s (or even last week’s) draconian measures every winter from here on in?  Would we, at the very least, insist that oldies self-isolate?  (Am I the only one who finds the term ‘social distancing’ more than vaguely Orwellian?)

Which poses the question, if I am right about the seasonal factor, why did we not choose the ‘herd immunity’ option from the get-go or, at least a variant of it, as in protecting the most vulnerable while allowing the virus to infect those most likely to survive it?  Might it have worked in these benign summer months?  Did we miss an opportunity?  Let as many people get the virus when it will have its least effect on individuals and our health system is most able to cope.  Are we ‘flattening the curve’ now, only to see it steepen again in winter?

I’m not saying we should have done nothing but the current approach implies by its very nature that it is not intended to eradicate the disease, just to contain it until a vaccine can be developed.  Thus we could be in lockdown for twelve months.  That would be catastrophic.

If we do get an increased winter death rate, I doubt very much it will be more than an uptick – nothing like the rates reported in Italy and Spain. Of more concern is the probability that this will inspire the media and interested commentators to panic the government into further draconian measures.  If the government hasn’t factored this into their considerations they’d better start doing so now.

A possible circuit breaker could be the development of an effective treatment  — possibly chloroquine, whose main mark against would appear to be that President Donald Trump has described it as promising and hence, in the mainstream media view, a possibility to be torn for its provenance rather than its potential.

Time may prove the alarmists right, but there must be some balance.  When we are told in one breath about new measures being put in place today, with promises of even more the next, it does not instil a confident belief the government really knows what it’s doing.

Well, that’s not entirely true. Our betters certainly know how spend billions of dollars. How sad if that burden on the economy for years to come, not to mention all the small business that may well never rise again, could have been avoided with a rational Plan B, rather than the prevailing panic of the ongoing Plan A.