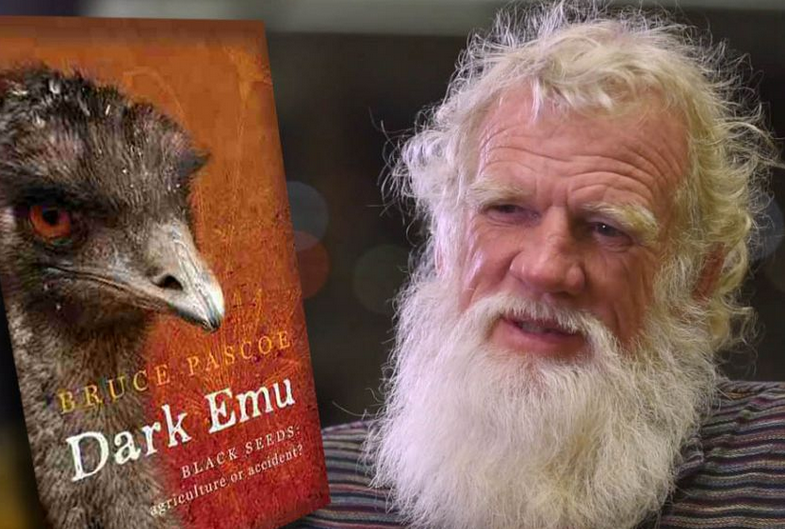 One of Bruce Pascoe’s favourite stories, which he tells on almost every occasion, concerns Charles Sturt’s  encounter with a large tribe of Aborigines, who allegedly saved him and his party from almost certain death.  Pascoe uses this incident to highlight the essential decency and humanity of the Australian Aborigines.  And, indeed it does.  But he also uses it to claim that they were living high on the hog in the middle of a desert that almost killed Sturt.  That part is a fabrication.  What follows is an extract from my book Bitter Harvest that examines this story.

It’s worth examining Pascoe’s description of this incident, which he titles ‘Sturt’s saviours’, in a little more detail:

Sturt’s party reached Coopers Creek, in what was to become known as Sturt’s Stony Desert, where they were confronted with sand ridges thirty metres high.

They ploughed on enduring incredible hardships. Sturt climbed one final dune and peered down into the plain.

on gaining the summit were hailed with a deafening shout by 3 or 400 natives, who were assembled in the flat below. I do not know, that my desire to see the savage in his wild state, was ever more gratified than on this occasion, for I had never before come so suddenly upon so large a party. The scene was one of the most animated description, and was rendered still more striking from the circumstance of the native huts, at which there were a number of women and children, occupying the whole crest of a long piece of rising ground at the opposite side of the flat.

Sturt was looking on the dry floodplain of a river, and he couldn’t understand how these people were able to survive. Sick and weary, and with horses stumbling with hunger, thirst and fatigue, Sturt was alarmed at coming so suddenly across many Aboriginal people.

Had these people been of an unfriendly temper, we could not by any possibility have escaped them, for our horses could not have broken into a canter to save our lives or their own. We were therefore wholly in their power … but, so far from exhibiting any unkind feeling, they treated us with genuine hospitality, and we might certainly have commanded whatever they had. Several of them brought us large troughs of water, and when we had taken a little, held them up for our horses to drink; an instance of nerve that is very remarkable, for I am quite sure that no white man, (having never seen or heard of a horse before, and with the natural apprehension the first sight of such an animal would create,) would deliberately have walked up to what must have appeared to them most formidable brutes, and placing the troughs they carried against their breast, have allowed the horses to drink, with their noses almost touching them. They likewise offered us some roasted ducks, and some cake. When we walked over to their camp, they pointed to a large new hut, and told us we could sleep there …. and (later) brought a quantity of sticks for us to make a fire, wood being extremely scarce.

Sturt was doing it tough among the savages alright. New house, roast duck and cake!

I have chosen to include this rather large extract because, in its entirety, it demonstrates clearly the paucity of Pascoe’s scholarship. Let me deal with the last paragraph first. Setting aside the incongruity of the author delegating someone else to read one of his primary sources, the analytical skills of his recruits must be quite exceptional for them to be able to pin-point Sturt’s location to within a minute of latitude and longitude. Unfortunately, the confidence of Pascoe et al regarding the location of this incident is quite misplaced, since a latitude of 127 south would put Sturt considerably south of the South Pole, were that possible. This is obviously a typo – and that we can excuse – but not, I think, the deliberate deception that Pascoe is perpetrating here.

A more careful reading of Sturt’s journal might have avoided this mistake since, on 2nd November, he, himself, notes ‘Our latitude here, by an altitude of Jupiter, was 27 degrees 47 minutes S.; our longitude by account 141 degrees 51 minutes E’.  His journal also records that the incident took place on the 3-4 November.  As anyone who had read the journals would know.  Put another way, there is no way that Pascoe’s ‘researchers’ could not have stumbled upon the fact that Sturt had done their putative work for them. This is pure fabrication. Why Pascoe would include this deception eludes me, other than perhaps to portray an impression of exceptional research.  What it actually portrays is a breathtaking arrogance and an insouciant attitude towards lying.

Now let me return to the beginning of the extract, which gives the impression that Sturt, almost in extremis, climbed one last sandy ridge where he beheld rescue in the form of a substantial tribe of friendly natives. In fact, the incident of climbing the final dune occurred on 21st October at a latitude of 25 degrees 54 minutes south  – approx 140 miles north of the encounter with the natives. It was at this point that Sturt determined to abandon his quest and return south. Sturt said:

At this point, which I have placed in lat. 25 degrees 54 minutes and in long. 139 degrees 25 minutes, I had again to choose between the chance of success or disaster, as on the first occasion; if I went on and should happen to find water, all for the time would be well, if not, destruction would have been inevitable. I was now nearly 50 miles from water, and feared that, as it was, some of my horses would fall before I could get back to it, yet I lingered undecided on the hill, reluctant to make up my mind, for I felt that if I thus again retired, it would be a virtual abandonment of the task undertaken. I should be doing an injustice to Mr. Stuart and to my men if I did not here mention that I told them the position we were placed in, and the chance on which our safety would depend if we went on. They might well have been excused if they had expressed an opinion contrary to such a course, but the only reply they made was to assure me that they were ready and willing to follow me to the last. After this, I believe I sat on the hill for more than half an hour with the telescope in my hand, but there was nothing to encourage me onwards; our situation, however, admitted not of delay. I might, it is true, have gone on and perished with all my men; but I saw neither the credit nor the utility of such a measure.

So he was not in extremis. That is a fabrication. He had the choice to proceed but wiser counsels prevailed. During that southern retreat he passed through a number of watered and vegetated areas. He was not at all uncomprehending at how they were able to survive. Indeed on the 30 October, Sturt observed two natives diving for mussels in a water hole—‘they seemed to be very expert (and) were not long in procuring a breakfast’.

On 1 November, Sturt observed that he ‘was exceedingly surprised that we had not seen more natives, and momentarily expected to come on some large tribe, but did not.’  By this stage, Sturt was quite confident of surviving and was not at all surprised at ‘how these people were able to survive’.

As to Sturt being ‘alarmed’ at coming across a large group of Aborigines, you can judge for yourself from his own words, rather than Pascoe’s : ‘I do not know, that my desire to see the savage in his wild state, was ever more gratified than on this occasion, for I had never before come so suddenly upon so large a party.’

And finally, to what the Australian article describes as Pascoe’s ‘dryly’ remarking that ‘Sturt was doing it tough among the savages alright’. Pascoe talks about the duck, the cake and the new house, but fails to mention that Sturt declined the offer of sleeping accommodation to set up his own camp nearby. This is just a cheap shot, designed to highlight that the Aborigines were at home in the Australian landscape in ways that the white man was not. But no-one ever doubted this and, moreover, it says nothing whatsoever about aboriginal agriculture. It also overlooks that Sturt’s journals are littered with incidents wherein he provided not only presents but food and water to down-at-heel natives. Here’s just one example from his first expedition, on the Castlereagh River:

I am inclined to think that they made these conflagrations to procure food, by seizing whatsoever might issue from the flames, as snakes, birds, or other animals; for they had taken every fish in the river, and the low state of its waters had enabled them to procure an abundance of muscles from its bed, which they had consumed with their characteristic improvidence. They were, consequently, in a starving condition, and so pitiable were their indications of it, that I was induced to feed such of them as visited the camp, notwithstanding their late misconduct.

My coverage above was based on a 2019 edition of Dark Emu.  Recently, I wondered if this incident had been modified in any way in recent editions — in particular, if Pascoe had stuck with the ridiculous claim of having volunteers ‘read the journals to examine the roast duck and cake story’ and to determine Sturt’s position.  So I took a look at the latest edition adorning the shelves of bookstores as far afield as Townsville airport.  And sure enough, there is a correction.  The ‘127 degrees south’ has now been corrected to read, correctly, 27 degrees south.  But that is it.   The rest remains unchanged.  Now, I don’t know if it was Bitter Harvest that alerted Pascoe’s publishers to this error – it could easily have been spotted by someone else.  But if it was, it would suggest a decision was made  to correct only the most glaring, albeit trivial, error while allowing the rest of Pascoe’s  fabrications to stand.