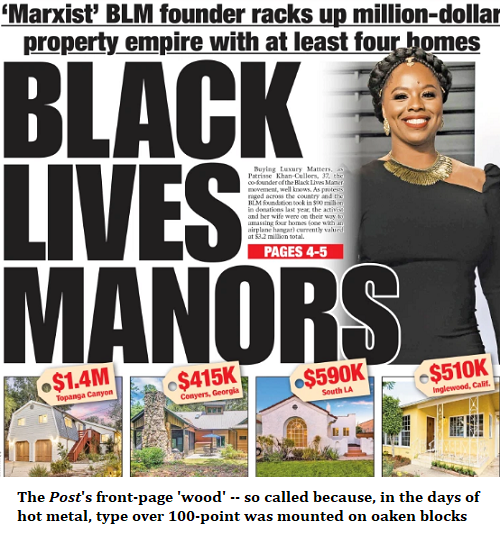 Some of us, or lefties anyway, imagine Black Lives Matter (BLM) to be a charity something like the Red Cross or Brotherhood of St Laurence but without the op shops, its founders akin to Florence Nightingale or Albert Schweizer. As Wikipedia puts it with a typical Left narrative slant, “The movement comprises many views and a broad array of demands but they center on criminal justice reform.”

Actually, the founders are Patrisse Cullors, Alicia Garza and Opal Tometi, all by their own description “trained Marxists” and . [1] Sydney University’s affiliate foundation awarded them its Sydney Peace Prize a few years back, which should tell you something. Ms Cullors was educated for years by Eric Mann, a member of the domestic terrorist organization Weather Underground. She has named wanted cop-killer Assata Shakur (real name: Joanne Chesimard) as a “leader” who “inspires” her.

I don’t know about other states but the sort of Victorians Premier Dan Andrews’ indulges to express their views took to the streets en mass to love-bomb BLM last June. Unlike pregnant mums in their kitchens and old ladies on park benches, Andrews’ personal Praetorian Guard, aka VicPol, made no arrests for violating the state-of-emergency lockdown. (VicPol later issued three organisers with $1652 infringement notices).[2] BLM must indeed be a noble cause if even the corono-virus respects it.

One of the BLM’s founders in 2013, 37-year-old Ms Cullors, has been in the US news lately – but certainly not in the news filtered for us by Their ABC. I see Ms Cullors has been quoted or mentioned in 14 ABC stories from 2017, so the current blackout on ABC news is unusual.

The BLM news coverage in the US has been a bit lively – so much so that Twitter and Facebook felt it their civic duty to shut down any adverse coverage to the best of the unelected tech giants’ ability.

The story was broken by the New York Post a week ago, the same newspaper that disclosed the lewdly corrupt contents of the laptop owned by Joe Biden’s son and randy grifter and crackhead Hunter Biden. Twitter, backed by Facebook, viewed the Hunter Biden story as unfit for consumption by the US electorate, and locked out the New York Post’s twitter account. Remember when the Left was against censorship and the Establishment? Big Tech would you prefer if you wiped all that from memory.

All of the above is my typically long-winded preamble to what BLM’s co-founder, Ms Cullors, has been up to. While her myrmidons were torching and looting city blocks or smashing statues of George Washington, Abraham Lincoln and others, Ms Cullors was investing on her personal account in four homes worth at least $US3.2 million. The homes were in exclusive white neighborhoods, such as Topanga Canyon, just down the road from ritzy Malibu. Topanga has a white population of 88.2 per cent and a black population of 0.4 per cent, according to the 2010 census. She was sniffing around for properties in the Bahamas but the four US homes are the only confirmed investments. She already owned two other homes in Los Angeles.

A celebrity real estate website wrote of her LA investment:

A winding 15-minute drive from The Commons at Calabasas and a slightly longer and somewhat less serpentine drive from Malibu’s Getty Villa, the pint-sized compound spans about one-quarter of an acre. The property’s not-quite 2,400 square feet is divided between the three-bedroom and two-bath main house and a separate one-bed/one-bath apartment capable of hosting guests long term with a private entry and a living room with kitchenette.

The Post reported Ms Cullors had also been prospecting for Bahamas property at an ultra-exclusive resort where Justin Timberlake and Tiger Woods both have homes. Luxury apartments and townhouses at the beachfront Albany resort, outside Nassau, start at $US5 million and range up to and above $US20 million.

BLM supporters donated $US90m to the international BLM foundation last year alone. Did any of that leak into Ms Cullors’ bank accounts? There’s no evidence that it did or didn’t. Unlike the white policemamn she and her mob target, she’s entitled to the presumption of innocence. Meanwhile, Michael Brown Sr., the black father of the 18-year-old killed by a Ferguson police officer in 2014, has enjoyed just $US500 from BLM affiliates. Brown Sr. asked: “Why hasn’t my family’s foundation received any assistance from the movement? How could you leave the families who are helping the community without any funding?” (For some perspective, 511 US cops were feloniously slain on duty in the decade to 2019, including 48 in 2019, plus a luckier 56,034 officers merely assaulted that year).

Accounts filings show that the BLM foundation committed $US21.7 million in grants to official and unofficial BLM chapters and black groups. It ended 2020 with a balance of more than $US60 million, after $US8.4 million expenses.

BLM, whitewashing (or blackwashing) Cullors, said that the criticism “continues a tradition of terror by white supremacists against Black activists.”

Patrisse’s work for Black people over the years has made her and others who align with the fight for Black liberation targets of racist violence. The narratives being spread about Patrisse have been generated by right-wing forces intent on reducing the support and influence of a movement that is larger than any one organization.

This right-wing offensive not only puts Patrisse, her child and her loved ones in harm’s way, it also continues a tradition of terror by white supremacists against Black activists.

Fundraising for Black Lives Matter has been conducted by the left-wing group Thousand Currents, which has a convicted terrorist on its board of directors.

Ms Cullors’ personal net worth has risen sharply in line with the global enthusiasm for her cause. Her earnings have arisen from her 2016 book When They Call You a Terrorist: A Black Lives Matter Memoir, speaking fees and, last year, a multi-year contract with Warner Bros to produce multi-platform content. The contract value is undisclosed.

It’s interesting that she chaired the “Reform LA Jails” group in 2019. The group paid her firm, Janaya & Patrisse Consulting, $US191,000 that year, at the rate of $US20,000 a month. She’s the sole owner. Reform LA Jails defended its payments, saying her remuneration was “market rate compensation” for running a $US5 million campaign.

It is hard to comprehend why Black women get scrutinized for being successful and entrepreneurial despite their enormous personal and financial sacrifice and commitment to justice, while white men and others receive accolades for making their millions. It is sexist and racist to expect an executive level Black woman to not be paid for their work.

Twitter is anything but racist, and has demonstrated as much by shutting down whites and blacks alike who disparage Ms Cullors. One critic muzzled by Twitter was black sports journalist Jason Whitlock, who had tweeted sarcastically in her persona, “Black Lives Matter but I don’t wanna live around you.” He also posted: “Black Lives Matter founder buys $1.4 million home in Topanga, which has a black population of 1.4%. She’s with her people!” Twitter said it would unblock him if he deleted his posts, but he replied that he’d stay in “Twitter jail” because he’d done nothing wrong. He added that Ms Cullors in her white neighborhood “will have plenty of “white cops and white people to complain about.”

What’s with BLM in general? It’s not so nice. The president of Greater New York Black Lives Matter, Hawk Newsome, has warned that “if this country doesn’t give us what we want, then we will burn down this system and replace it.” The fact of the matter is that more than 90 per cent of black violent deaths – especially of kids and teens — are black-on-black mayhem, but BLM’s website instead focused (the text was recently removed) on how to destroy the nuclear family:

We disrupt the Western-prescribed nuclear family structure requirement by supporting each other as extended families and ‘villages’ that collectively care for one another, especially our children, to the degree that mothers, parents, and children are comfortable.

Currently in Venezuela. Such a relief to be in a place where there is intelligent political discourse.

She wrote of its murderous Marxist dictator Nicolas Maduro:

In these last 17 years, we have witnessed the Bolivarian Revolution champion participatory democracy and construct a fair, transparent election system recognized as among the best in the world.

It pains me to be so negative about BLM. Thousands of BLM enthusiasts in Melbourne alone can’t be wrong, can they?

[1] Cullors said in 2015: “The first thing, I think, is that we actually do have an ideological frame. Myself and Alicia (Garza, BLM co-founder) in particular are trained organizers.” Cullors also said: “We are trained Marxists. We are super-versed on, sort of, ideological theories.”

[2] “Police said no other fines would be issued in relation to the rally in Melbourne’s CBD last Saturday, which was calling for an end to Aboriginal deaths in custody.”

Recognise the Fight Ahead