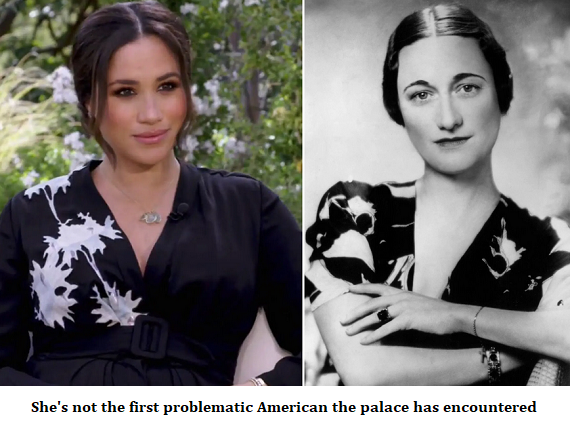 Maybe the best analysis of the Meghan–Harry–Oprah­ interview came the next day in a tweet from my old friend (and National Review colleague) Ramesh Ponnuru: “Got to think this interview would have gone v differently if Netflix hadn’t run The Crown.” He’s undoubtedly right. To be sure, other factors influenced both how the interview was conducted by Ms Winfrey and how the various publics in Britain, the US and elsewhere have reacted to it. But the subtle erosion of the traditional concept of truth which The Crown has fostered (along with the erosion of many other traditional concepts) plainly made us receptive to the wilder distortions of reality that were scattered through the now “historic” interview.

Not to blow my own columnar trumpet but … here was the main thrust of my criticism in our December issue:

A dramatised documentary is now defined as a play about real people in real situations in which the author has total freedom to invent their words, actions and motives. That freedom is obviously a temptation for the writer (and his collaborators in staging the drama) to indulge their prejudices by inventing discreditable actions by their characters, by portraying them as foolish, awkward, tongue-tied, scheming or otherwise unattractive, by largely omitting important episodes that redound to their credit … and by generally manipulating the historical record to show them in the wrong. That temptation risks turning libels into historical truths.

Its most recent season showed the 1981 Buckingham Palace intruder breaking through its security twice, the first time as a drunken escapade, the second time to complain to a sympathetic Queen about Mrs Thatcher’s economic policies. That account takes a sensational real event—an intruder invading the royal bedroom and being calmly talked down by the Queen until she can press a panic button—mixes it with a little fiction, adds a dash of partisanship, and turns it into conventional agitprop drama.

Unless The Crown is to be universally enjoyed as simple fiction—a play like any other about invented characters—then its deviations from the everyday truth of what happened have got to be pointed out and their unreality established. Or else the background to all our lives will be a tapestry woven indistinguishably from both truth and falsehood.

And because Netflix has run The Crown, we watched the Meghan–Harry–Oprah interview in a somewhat distorted way. One is tempted to imagine, as Her Majesty might put it, that the interview was a surrealist extension of the doctrine of personal “truths” in which the real people whose lives will be depicted in future seasons of the royal melodrama invade the stage à la Pirandello and demand to be portrayed in a more sympathetic way.

# Harry and Meghan had obviously been given firm professional instructions not to say an unkind word about the Queen (who enjoys stratospheric levels of international popularity). But their praise then undercut much else of what they said.

# It is hard to believe that no one in the royal household sought psychiatric help for Meghan when she hinted at suicide, but if it’s true, then it was “more than a crime, an error”, and at least one head should roll.

# Far more seriously than Meghan in anything she said, Harry betrayed his family by floating the unpleasant innuendo that a senior royal had made a comment about his future children’s likely skin colouring. By piously refusing to name the alleged miscreant, he also ensured that the entire royal family was smeared as racist.

# Oprah Winfrey conducted the interview like a prosecuting attorney who is questioning friendly witnesses in a show trial of a Mafia crime family.

As reports following the interview have predict­ably shown, the topic of overwhelming interest to the media is the story of the senior royal who raised with Harry the question of what skin colour his son would have with the implication (amplified by some mumbling remarks from Harry about how he had been liberated and led into the light by Meghan) that the royal family was tainted with racism. Their suspicion about this was helped along by Meghan’s indignant claim that her son, Archie, would not in time receive the title of prince and its accompanying privileges (such as security protection) as she believed the other grandchildren of Prince Charles had done.

“Why not?” they (and Oprah) wondered darkly. What reason could there be for singling Archie out in this way? The answer suggested itself.

Two things should be said about this inferred racism. The first is that many people desperately want to believe it’s true. There’s an appetite in the media, political, business and diplomatic elites for stories showing that the royals—and indeed the Brits more generally—are deeply racist under a polite facade.

Whatever the motive, the evidence is against such suspicions. For many years opinion polls have shown consistently that the Brits are by all the standard tests the least racist nation in Europe. The UK, for example, now has more government ministers of mixed race than the entire European Union. The warm welcome that both British nation and royal family extended to Meghan Markle at the time of her wedding to Prince Harry confirmed the relaxed and tolerant social attitudes shown in the opinion polls. Her wedding was a genuine national celebration that was also colour-blind.

The desire to believe otherwise is real, however, and it has grown more pronounced since the passage of Brexit, the rise of Black Lives Matter, and the emergence in the UK of campaigns to “decolonise” British institutions from the British Museum to Churchill College at Cambridge University. Given that the royal family is at the summit of legal, political and social privilege in Britain, it could hardly escape the same “decolonising” attack. And the Oprah interview played into that hostile narrative.

But the second thing to be said is that it rests on facts that can be tested. In particular, it looks as if Meghan is mistaken in thinking that her son was suffering discrimination in not being considered eligible for the title of prince and its accompanying privileges. Only the children of the heir to the throne are eligible for this title; the children of his siblings lose that prospective privilege when the heir has an heir. Before his birth Archie had already lost the chance of being a prince when Prince George was born. I don’t blame Meghan for thinking it unfair on her son (though it’s odd that no one explained it to her—or apparently to Harry). But it has nothing whatever to do with race.

The truth is that the House of Windsor rests on a social structure that takes birth very seriously but takes no account of race. It can’t afford to do so. Monarchies rest in part on dynastic marriages, and suitable brides may need to be sought over long distances and many cultural barriers to strengthen the kingdom. That goes double for imperial monarchies like the British one which will also wish to respect the titles of local monarchs in order to conciliate their peoples, rule through them, and uphold the monarchical principle and themselves.

As early as Queen Victoria’s time, the Prince of Wales, later King Edward VII, rejected a complaint from the German Crown Prince, later Kaiser Wilhelm, that he had been placed behind an African king in the order of preference on going in to dinner. Edward refused Wilhelm’s request for a change, saying (not an exact quote): “Either this man is an ordinary black—in which case, why is he dining at Windsor? Or he’s a king—in which case, he goes in to dinner before you, Willie.”

Elizabeth II has continued this relaxed assimilationist style of royal rule in the Common­wealth, as Meghan herself pointed out in the interview, with enormous worldwide success. Prince William has gone further in the domestic UK politics of racial conciliation, arguing that the BAFTA Awards (Britain’s Oscars) should be reformed to ensure more “diversity and inclusion”. (That’s very far indeed, since diversity and inclusion are in direct conflict with the BAFTA principle of rewarding competitive excellence.) Wholeheartedly welcoming Meghan Markle into the royal family was the culmination of this shrewd but beneficent policy. Why would the Windsors abandon it now?

There are enough errors, oddities and inconsistencies in the account of Meghan and Harry to warrant some scepticism. Yet when Piers Morgan, the presenter of Good Morning Britain, said he didn’t believe a word of what Meghan had said and that her remarks had damaged the monarchy, she lodged a formal complaint with the television regulator, Morgan’s fellow presenters disavowed him, the CEO of the television company, Carolyn McCall, said she believed Meghan “completely”, and Morgan was forced out.

Yet how did McCall’s remarks differ from Morgan’s other than being on the opposite side of the argument? Both were expressions of opinion. Neither as yet has a stronger claim to be true. What matters surely is that when a controversy is swirling around an institution, the claims made by all parties to the dispute should be subjected to the same exacting standards of truth and investigation. Even the Queen enjoys a presumption of innocence. That’s what Morgan was proposing—and how we should be treating the Oprah interview.

After all, as April Ponnuru pointed out, Meghan Markle will probably be playing Meghan Markle in another few seasons of The Crown. She can be the wronged heroine then. It’s fiction.