The Desperate Twilight of Donald Trump 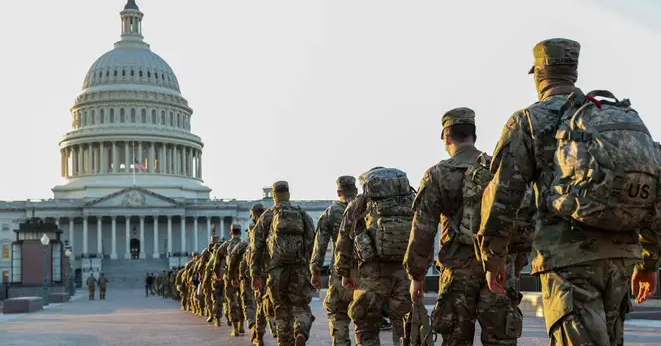 “Well OK, apart from deregulation, fuller employment, cheaper energy, return of industry, the First Step Act, standing up to China, rejection of the Paris agreement, control of illegal immigration and a Covid vaccine in record time, what has Trump ever done for us?”

In the build-up last week to the US Presidential inauguration, Sky News (and probably others) reported that “tonight there are more troops in DC than there are in Iraq and Afghanistan combined.”

I wonder if anyone appreciated the irony of that comparison, only made possible by the fact that President Trump, in line with one of his many electoral commitments, had gradually withdrawn US troops from overseas deployment and, unlike all many of his immediate predecessors, declined to be involved in any new wars.  And he did this at the same time as he defeated ISIS and junked the Iran nuclear deal.

Trump’s record of achievement is considerable but his detractors ignore that and point to his crassness, his misogyny, his stubbornness and many other personal flaws to argue that he should never have been President. He is now accused of dividing the country by trashing sacred public institutions.  It is said he was unsuitable to hold the office because he did not act in a Presidential manner.

It’s often said that newly appointed leaders all make mistakes and have to be given some leeway to ‘grow into the role’. Unfortunately, Trump was never afforded that luxury. It was not his policies that were targeted but his very election.  He suffered unprecedented personal abuse from day one.  One of the sacred institutions of the US is the Presidency itself.  The man has always been treated with respect because of the office he holds.  Not so with Trump.  It was the Democrats who trashed that – the most vivid example of which was Nancy Pelosi standing behind the President and tearing up his State of the Union address.

President Job might have managed it, but I imagine it was next to impossible for a man with Trump’s temperament to develop any kind of ‘Presidential manner’ in the face of this unrelenting hostility.

Getting back to recent events, it must be said that Trump miscalculated seriously his response to the ‘stolen election’. Setting aside the question of whether alleged voter fraud was sufficient to overturn the result, the real question is what are the odds there was no fraud? Miniscule, I would say, it’s very nearly an American tradition and part of every election. And if that is so, given the incessant vilification of Trump and the unconstitutional amendment of voter regulations, what are the odds the fraud went considerably beyond what one might normally expect?  Put it this way, if you believe there was no voter fraud you are living in cloud cuckoo land. And if it exists there must be evidence of it.

Trump was right to pursue his claims. The question is when should he have backed off? Trump’s tactic was not to ‘mount a coup’, as some deranged commentators have suggested. His tactic was to pursue his claims through the courts as he was perfectly entitled to do.  However, as court after court refused even to hear his evidence – thus giving legal cover to the lie that there was no evidence – Trump must have become increasingly frustrated.  His final hope was the Supreme Court but, ultimately, it failed to deliver. This was ironic since Trump’s most important legacy is the current composition of the court. It will almost certainly be his most enduring one.  Let’s look at the actions of the Supreme Court.

The State of Texas lodged a lawsuit with the Supreme Court against the States of Wisconsin, Pennsylvania, Georgia and Michigan on the grounds that they altered electoral rules in contravention of the Constitution, which gives legislatures the power to make electoral rules, not State judiciaries or officials. A number of other states joined the Texas action. The underlying logic of their case would be that unconstitutional actions on the part of one state, that affect the overall result of the election, have consequences for the other states. That logic seems, to me, unassailable.

In fact, this lawsuit could have been foreseen because, before to the election, the Republican Party legislators in Pennsylvania had petitioned the Supreme Court to overturn the new election rules gazetted in that state on the exact same grounds argued by Texas. Justice Alito ruled that the Court would not expedite a hearing in that case but also ruled that ballots collected under the new rules were to be kept segregated. Clearly, he foresaw a post-election challenge.

The Texas case was dismissed in very short order on the grounds that Texas did not have legal standing under Article III of the US Constitution. The relevant portion of Article III is as follows:

The judicial Power shall extend to all Cases, in Law and Equity, arising under this Constitution, the Laws of the United States, and Treaties made, or which shall be made, under their Authority;—to all Cases affecting Ambassadors, other public Ministers and Consuls;—to all Cases of admiralty and maritime Jurisdiction;—to Controversies to which the United States shall be a Party;—to Controversies between two or more States;—between a State and Citizens of another State;—between Citizens of different States;—between Citizens of the same State claiming Lands under Grants of different States, and between a State, or the Citizens thereof, and foreign States, Citizens or Subjects.

I’m not a lawyer but it would seem to me that the underlined words would have allowed the Court to find that Texas had standing – there is little scope for nuance in those words. Two dissenting judges, Alito and Thomas, obviously thought so.

So why didn’t the remaining conservative judges, Gorsuch, Kavanaugh and Coney Barrett, agree? These are the three appointed by Trump, to his great credit. Now I’m not saying that because they owed their appointment to Trump that they were obliged to demonstrate judicial loyalty. We would expect them to rule objectively according to the letter of the law, particularly Coney Barrett as she made such a point of this in her confirmation hearings. In fact, as far they are concerned, secure on the Court for life, I’m sure they believe Trump’s work is done.

But, on the other hand, it would be unconscionable if they were to rule against Trump simply on the grounds that it would give an impression of favouritism or gratitude. To avoid that charge they could have recused themselves, which would have resulted in a ruling of four to two against hearing the case. That would have put a much more acceptable face on the defeat for the Trump rather than the humiliation that seven to two inflicted.

But that is not what I think happened . I think the Court is conscious that if anything were to occur that would overturn the putative result, all hell would break out in the States, the likes of which would put this year’s BLM riots in the shade.

The Supreme Court would, understandably, not wish to be saddled with the opprobrium that would attend such a result and would fear that the status or standing of the Court could be brought into disrepute. Perhaps they chose not to hear the case because they were afraid they would have to find in favour of Texas. On the other hand, they know the vast majority of Trump supporters will cop it on the chin.

But if that is what has occurred, and the cynic (realist) in me cannot shake off the feeling that it is, then the Supreme Court would have set itself up as a ‘kingmaker’ – surely anathema to any self-respecting US citizen – and, in doing so, set a very dangerous precedent.

Nonetheless, it was at that point that Trump should have realized it was over. He was never going to concede the election graciously.  You will note, I did not say ‘concede defeat’ and that is critical to understanding his recent actions.  Trump will never concede the election but he has now conceded defeat.

Had he done that after the Supreme Court did its shameful Pontius Pilate impersonation, his presidency would have remained untarnished.

29 thoughts on “The Desperate Twilight of Donald Trump”

In Defence of Barnaby Joyce