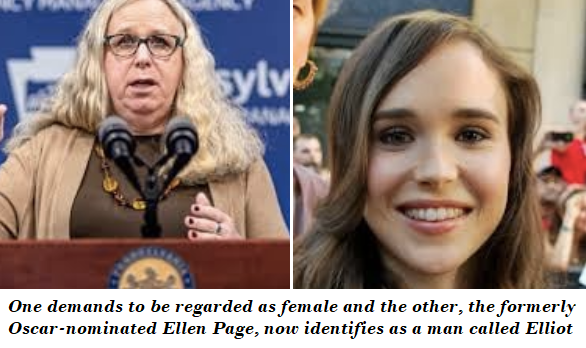 The surest way to demonstrate your progressive virtue nowadays is to inflict preferred pronouns on all your potential interlocutors. One often notices such displays on social media profiles, but it increasingly seems to be an addition to the workplace email signature. Yes, Jonathan (he/him), junior associate from accounts, wants you to know that he stands proudly with his trans allies, and you better not forget it. Those allies include the rather cheerless non-binary folk, the ones who prefer the baffling and nonsensical pronoun set of they/them. As for those who go by “zie” or “zim”, well, I just hope they get all the professional help they so obviously need.

If you really want to flash your woke credentials, however, you need to clean up your broiader vocabulary. Those out-of-date barbarisms like man and woman need to be replaced with trans-friendly, inclusive alternatives. Take, for example, the sub-editors at Healthline, an online magazine of health information and advice, who recently offered readers the following headline: ‘Do Vulva Owners Like Sex?’ Is the Wrong Question – Here’s What You Should Ask Instead

Yes, undoubtedly: all sensible people can agree that there is something very wrong with that question.

You may have noticed additional assaults on the language such as “menstruators”, “birthing people”, and “individuals with a cervix”. CIS-heterosexist pig that I am, I prefer the term women, and such a view makes me unfit for inclusion in quite a few highly educated circles these days. I can’t really complain about that, to be honest. That’s why, at first glance, I’m not sure that all this trans guff is an entirely useless exercise. The wokesters, to put it mildly, lack reticence and solemnly advertise their stupidity to all; that’s wonderfully helpful in deciding whose company it is simply best to avoid.

The problem with such a plan, though, as JK Rowling, John Cleese, and the growing ranks of the cancelled can attest, is that anyone offering the mildest defence of biological reality ends up a target. To avoid the wrath of the activists, one must go along with ideas that, until about yesterday, were obvious metaphysical impossibilities. Yes, men can give birth, you transphobe! Of course, men can have periods, you bigot! Haven’t you heard that award-winning actress Ellen Page is now Elliot and uses the pronouns he/they? Do try to pay attention, won’t you?

Nodding along, politely but insincerely, may allow you to escape censure, but I would caution against such an approach. In fact, I wonder if the transgender moment, which has arrived with such rapidity and vehemence, is already losing some of its momentum. Let me explain. It seems that the trans activists make one demand with particular ferocity and defensiveness, almost as if they, too, are unsure of its validity. This is the demand that parents, educators, counsellors and doctors take an affirmative-care approach to young children afflicted with gender dysphoria.

Affirmation is alarmingly simple: if your very young daughter or teenager says she is trans, then, well, she is, and every effort must be made to accommodate and encourage that new identity. At first, this may involve new male pronouns and a male name, but it can eventually lead to more drastic interventions such as puberty blockers, testosterone injections and mastectomies.

In our current transgender mania, young girls are far more likely than boys to become the patients and, therefore, the victims. This phenomenon has come to the attention of Abigail Shrier, author of Irreversible Damage: The Transgender Craze Seducing Our Daughters. Shrier’s book is a sobering and meticulous inquiry into the dramatic rise of gender dysphoria and its harmful implications for America’s teenage girls. Drawing on interviews with parents and their children, as well as the dissenters in the medical community, Shrier persuasively argues that this surge is mostly driven by a social contagion rather than genuine gender dysphoria.

There are two villains here: first, creepy social media personalities offer the illusion that being trans as a fix for teenage angst; and second, educators are promulgators of gender theory and fluidity, turning trans into something heroic, morally righteous and thrilling. In this way, the cult recruits new members.

The allure can wear off pretty quickly, though. With compassion, Shrier tells the stories of detransitioners, the poor souls once convinced they were being trans who are now crushed by regret and reviled by the activists. The detransitioners also carry the scars of surgical self-mutilation and a future of sterility. Such stories all too often get lost in the glitter and noise of celebrating gender fluidity.

Predictably, Irreversible Damage has been ignored by the mainstream American press. While Amazon, for example, carries the book it deems it too offensive to be advertised on its site. Target, a major bookseller in the US, initially refused to stock it because of the whinging of a single complainant on social media. The most deranged response came from a Berkeley English professor, who demanded that her Twitter lemmings steal the book and burn it. Happily, though, none of this has had its intended effect, and the book is a bestseller. Perhaps the campaign of intimidation has worked to bring Shrier’s argument to the attention of more readers, those who need a reminder that their trans-scepticism is actually a mark of sanity.

There is also good news from the UK, where Keira Bell has just won a case in the High Court against the National Health Service’s Tavistock gender clinic. The judges offered the commonsense opinion that children and teenagers are unable to give informed consent to taking puberty blockers. Such a practice has been deemed a dangerous experiment, given the paucity of evidence for its benefits and its much more obvious harms. Keira Bell, a brave detransitioner, deserves to have her heartbreaking story widely known.

And what about Australia? Are we also going to follow these trends and experience an outbreak of common sense? We have done it before, after all. Quadrant readers will shudder to remember Roz Ward, the radical who loved the Russian Revolution and disliked the enthusiasts for the gender binary in five- and six-years-olds. To counter this, she founded SafeSchools, which dressed up the usual gender garbage as educational material. Under public pressure, the government came to its senses and scrapped the program, which was a great victory for the CIS-heteronormative hegemony, as Roz and the kids call it.

Ward’s firing and departure from public life have been, all things considered, very good for the country. I wonder, though, if a touch of complacency set in after that, and since then, Ward’s co-thinkers and foot-soldiers have carried on the revolutionary struggle with too much ease. Consider the fact that gender clinics in Australia allow patients as young as 10 to receive puberty blockers, and 15-year-olds are reckoned capable to give informed consent for their double mastectomies. Judging by the staff list at Melbourne’s Royal Children’s Hospital Gender Clinic, switching kids’ genders is a growth industry with considerable opportunity for career advancement. Consider also that two drag queens are suing Lyle Shelton for his temerity in suggesting that Queeny and Diamond Good-Rim, as they are known, shouldn’t be hanging around your local library branch for Storytime Hour with the kids.

Claire Chandler, Senator from Tasmania, who opposes the intrusion of men into both women’s sports and bathrooms, has also faced the terror of the trans lobby, as she recently detailed for Quadrant Online readers. Perhaps we need to find again some of the fibre and fervour from the earlier battles over Safe Schools. Let us re-cultivate our annoyance with the trans activists and gender theorists. And don’t forget Jonathan from Accounts, whose pronouns he can bloody well keep to himself.