Triumph of the Deep Nanny State 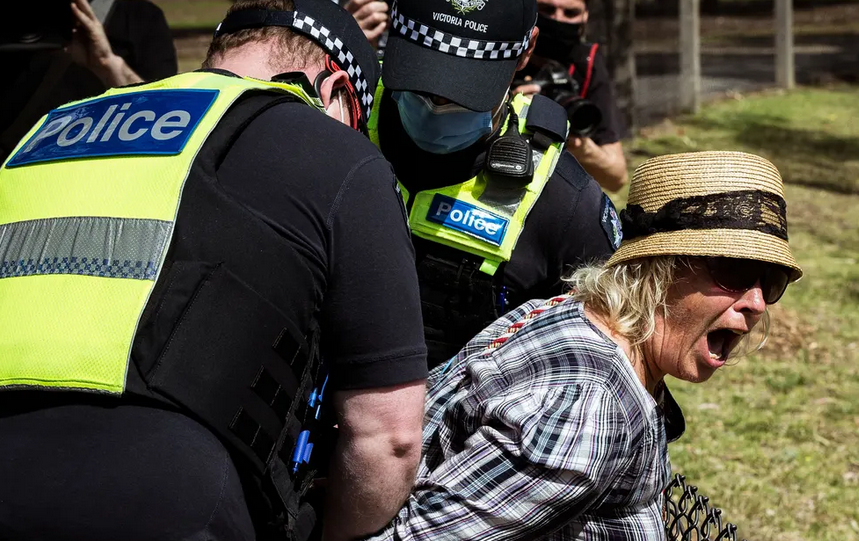 The approach of Christmas is an appropriate time to reflect on an extraordinary year. The Wuhan virus, otherwise known as COVID-19, upended or accelerated a number of disturbing trends. Whatever one might argue about the necessity of certain restrictions during the peak of daily infections, the practical reality is that our political leaders appointed themselves our masters, not our servants. The notion that government answers to the citizenry in a free society was rendered at the stroke of a chief health officer’s pen no more than an interesting but superseded theory.

Fear, far out of proportion to the real risk of serious illness and death for the great majority, drove a wholesale surrender to State power, such that freedom of movement and association were restricted in unprecedented ways. The spectacle of state premiers and chief medical officers ruling by executive fiat, wagging their fingers at us children and commanding total obedience, might have been hilarious were it not so depressing. And while the lectures and admonitions rained down, huge swathes of our economy became dependent on government largesse.

During the lockdowns absurd restrictions abounded. Even in relatively sensible New South Wales, you were not allowed to sit by yourself on a park bench or even go driving in your car, two activities carrying no risk whatsoever. For a short time, even New South Wales Police were watching out for geriatric hooligans taking the air alone in unapproved places. Nanny statism had achieved its apotheosis.

Much of this nonsense was accompanied by mendacious declarations that “we” were “all in this together”. Meanwhile, private businesses were shut, many never to reopen, their employees condemned to unemployment in the long term when the life support of the JobKeeper supplement expires. Did anyone notice the big winners in all of this? Why, just look to Coles and Woolworths, to name but two examples, which each saw record sales! And why wouldn’t they with competition from mum-and-dad stores shut down by government fiat and nowhere else to shop but the big chains?  Meanwhile, our political masters, public servants and police sailed serenely along, secure in their jobs and taxpayer-funded salaries. It was nothing less than they deserved, one deduced from the arrogance and caprice of their edicts, for the noble service of screwing their laid-off subjects.

In the United States, the old spirit of rebellion still lives, despite the efforts of the legacy media and Big Tech to mute the voices of opposition. In Australia, protests against unreasonable restrictions were condemned as menaces to public health. In Victoria especially, police acted more as totalitarian enforcers than as a traditional protectors of life, property and liberty. To see a significant section of the population bleating its approval of a pyjama-clad pregnant lady’s arrest for no greater crime than putting up a dissident Facebook post was to despair. That all this unfolded in the woman’s kitchen as her children looked on must have heartened the resolve of Daniel Andrews’ VicPol  enforcers no end. Having framed a cardinal, made a lawyer an informer against her clients and, for light relief, opened fire on two nightclub revellers in fancy dress, this incident and others like it must have served as confirmation that the old rules, and the consequences for breaking them, had all been scratched.

North of the Murray, the New South Wales Government’s relatively early reversion from its earlier absurdist restrictions to a more rational response to COVID was, I can only suspect but not prove , the result of Premier Gladys Berejiklian, a member of the “moderate” faction, yielding ground to the rival faction, led by the bstate Liberals’ deputy leader, State Treasurer Dominic Perrottet. The result appears to be proper cabinet process and parliamentary accountability. In other states, we have seen duumvirates — the premiers and the chief medical officers — ruling by decree.

Commentators Peta Credlin, Andrew Bolt, Paul Murray and Chris Kenny, among others, have been devastating in their analyses of the premiers’ antics, in particular those of Daniel Andrews and South Australia’s Steve Marshall for their unnecessary lockdowns. I see no need to traverse the same ground except to note that the Socialist Left Daniel Andrews seemed to be the same sort of control freak as America’s plague of leftist Democrat governors and mayors, such Andrew Cuomo of New York State, Gavin Newsom in California and Bill de Blasio, the mayor who has presided over the Big Apple’s precipitous return to the bad old days of pre-Giuliani crime, corruption and economic decline. More shameful was the panicked and ridiculous, albeit short, lockdown by the notionally conservative Marshall. One might have expected members of the South Australian Liberal Party, nominally committed to limited government, personal freedom and a sensible, proportionate response to any perceived crisis, to be seriously contemplating the ouster of their leader. Instead, fellow Liberals who should know better have crawled into dark corners and assumed the foetal position.

Too often, those we might have hoped would be at the forefront in defending freedom of speech, association and movement have gone missing in action. Even Scott Morrison appears persuaded that freedom of speech is relatively unimportant in comparison with our short-term economic good health.

In response to COVID, instead of a targeted and proportionate response to protect the elderly and those with co-morbidities, the Deep Nanny Staters, often leading elected politicians by the nose, saw opportunity to expand the range of controls over all our lives. Not surprisingly, addiction to power being stronger than heroin, they have been reluctant to let go. Instead, they use a too often uncritical media to promote and perpetuate a sense of crisis in order to try to sustain an almost permanent state of emergency. Consider, as just one example, Victoria’s decision to limit attendance at the Boxing Day Test to no more than 30,000, leaving the vast tiers of the MCG two-thirds empty. Yet across greater Melbourne, in malls and shopping centres all over, unregulated crowds on that same day will jam together in a consumer stampede to snap up post-Christmas bargains. Of this glaring inconsistency, from the media we have heard hardly a peep.

In Australia and elsewhere, it seems that defenders of freedom are facing a two-front war. On one side, academic freedom, epitomised in the Peter Ridd appeal now before the High Court, the suspension of Drew Pavlou from the University of Queensland for daring to express opposition to the ubiquitous Chinese Communist presence and influence at the university, the “woke” takeover of both the bureaucracy and large sections of big business. On the other side, the shutdowns have not merely mortally wounded large swathes of small business, but also have attacked and eroded a fundamental foundation of our freedom — the right to private property. To be clear, if you owned but could not operate your business, your right to property was destroyed. In those instances where bankruptcy ensued, what we see is, in effect, ruin without without possibility of compensation.

There has been much to regret abot this year soon to end, not least a massive expansion of government in Australia and all the world over. Conservatives in government tend to see this as unfortunate but inevitable and sort of hope that it might be reversed sometime in the future. The messianic Left regard COVID as an opportunity for reordering of society, in part by crimping or outright destroying the very freedoms for which past generations fought.

Unfortunately, a new generation of purported conservatives seems to have forgotten the courage of the convictions that saw Ronald Reagan, Pope John Paul II and Margaret Thatcher fight and win the Cold War. If the medicos ever develop a vaccine for weak spines and general fecklessness, there will be no shortage of sleeves in need of being rolled up.

The Failure of Biden’s ‘Friends and Allies’ Strategy

Happily Ever After in ABC Fairyland