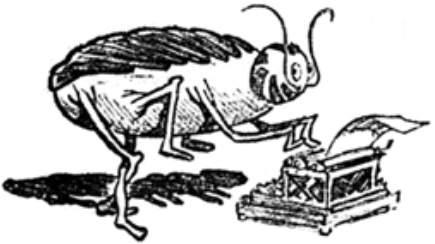 I saw a cockroach on my carpet the other night. Nasty things which I like to avoid. Though I live in Sydney – ‘cockroach country’, according to Barry Humphries – I seldom see one in my flat. Yet, there again, the evening after, another Periplaneta australasiae in the same exact spot. I forgot to mention, I killed the first one with an abundance of insecticide spray and then flushed it away.

What’s going on, I thought. Coincidences I tend not to believe in when they happen to me and they are unpleasant. Was I targeted for a fate worse than a fate worse than death as Blackadder put it in one of his WWI episodes? No, apparently. Gerard, a friend of mine who worked as an industrial chemist, told me that roaches follow the pheromone of their fellows. Mystery solved. Phew!

The world is full of creepy crawlies, biting, stinging, devouring creatures?  Are they all necessary? Obviously not. Species die out in large numbers over time and still we survive and thrive. When I say we survive and thrive, I mean humans as a species. As individuals, even the longest living among us, spend little time on this mortal coil.

I saw an interesting program the other day about women in WWII in England. A number of women in their early eighties, I would guess, were talking about their experiences as young women in the early 1940s. I realised of course that these interviews must have taken place some two decades ago. The women would be dead now, if they were not over 100 years. As another reminder of death’s march, Julius Caesar and Elvis are dead.

How did my mind leap to the ABC? You work it out. Things I like to avoid, I suppose. But I was lulled.

Thought I’d catch the ABC News last Wednesday evening (16 December) to see what the weather was doing. Before I knew it, Leigh Sales was electronically projected into my living space. “More than 300,000 dead in the US from COVID,” was the lead in.

Cut to ABC’s North American Reporter, the doleful Kathryn Diss. Presenting doom-laden commentary is clearly her forte. Her segment lasted only about seven minutes but it was long on despair.

Topping and tailing the segment was epidemiologist Gavin MacGregor-Skinner. “We built a monument for 9/11,” he said. “We would have to build a monument every day for the last two weeks, that’s how colossal the loss of life is.” You just know he’s a jerk. How about a monument for heart disease and cancer? Together, they accounted for an average of 3,440 deaths each and every day in 2018.

An Amber Carter was interviewed. Tragically, she had lost her thirteen-year-old daughter, who tested positive for COVID after she had died. Kathryn suffered from an autoimmune condition which made her vulnerable to infections. Distressingly, children die; and, when the dust has settled, we might well find that no more children died in 2020 than in former years. In 2018, 5,450 children between the ages of 5 and 14 died in America and 3,830 between the ages of 1 and 4.

Did Diss give perspective on the tragedy? Not a bit of it. She quickly moved on. “It’s difficult to comprehend how things could possible get any worse, but they are and very quickly,” she said.

Next Diss managed to find her Doctor Doom. Dr Mel Herbert, an Australian living in California. He is worried that so many people will get sick that they won’t be able to be helped; that in the next week “we’ll pretty much be in crisis mode.” He talked about his hospital being overrun and there being, wait for it, “no ventilators left.” In that situation he suggested providing patients with “medications like morphine or other sedatives so that they can transition from life to death, but without the terrible suffering.”

And how likely (or unlikely) was any of this and how much more crowded are hospitals now than during a normal or bad winter flu season? That you will not discover from the ABC.

Enter Lizanne Jennings, an ICU nurse. Sadly, she had lost her mother and husband. However, we were not told anything about their respective ages or medical conditions. And, predictably, it was bound to come, Diss informed us that the nurse, “blames Donald Trump for failing to take it seriously.”

Finally, ‘to lighten the mood’, MacGregor-Skinner made a second appearance. “It’s going to turn out bad,” he warned.

If you were to take this reportage at face value, you would be forgiven for thinking that death was a stranger before COVID. Alarmist and tendentious talk, with a cast of participants carefully selected to underscore how utterly hopeless is the situation. Abandon hope all ye who enter the portal of the ABC.

No perspective was given, no counter views heard. Nothing to disturb the COVID party line of the ABC staff-collective. It was garbage journalism.

The problem with all of this is that those who rely on the ABC for their news and information must come away severely ill-informed; intellectual cripples, in fact. Such is the debilitating bounty of annually spending close to a billion taxpayer dollars on a rogue broadcaster. Moral: Don’t watch the ABC.

Known to God, but not Beijing