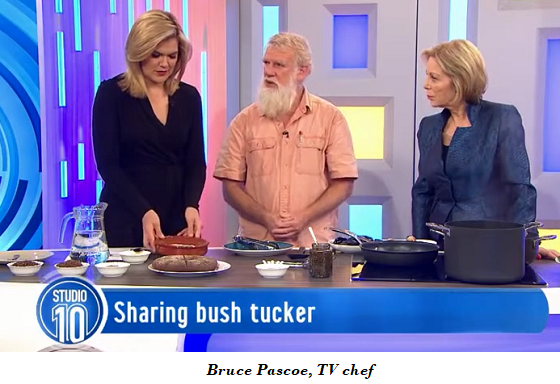 ABC favourite Bruce Pascoe wrote a fake history, Dark Emu, claiming that, rather than being the nomadic hunter/gatherer society we have always known them to be, Australian Aborigines were actually a sophisticated society of settled agriculturalists.  The book garnered a NSW Premiers Literary Award and has sold a bucketload of copies. As a result, Pascoe has been hailed, by The Australian no less, as ‘our most influential Indigenous historian’.

Next he planted a couple of acres on his farm near Mallacoota with native grasses, harvested some of it and baked a loaf of bread.  As a result he has been making a crust in two ways, having now been appointed Enterprise Professor in Indigenous Agriculture at the University of Melbourne. Let’s hope he doesn’t take a first aid course. He could end up chief surgeon at Royal Melbourne Hospital.

So Pascoe goes from strength to strength, secure in the knowledge that none of his cheerleaders (a posse including just about everyone who is not associated with Quadrant, The Spectator or Sky News) will even acknowledge the existence of my book Bitter Harvest, which — allow me to put modesty aside — totally demolishes both his thesis and his credibility.  One of the reasons cited by Wikipedia gatekeepers in denying any mention of Bitter Harvest in their Bruce Pascoe article, is that my book has sold only a handful of copies.  In fact, we’ve sold out our entire first print run  and have just released the second, expanded edition, which covers considerably more of Pascoe’s dissembling than made it into the first edition. But I have also ventured somewhat outside the direct remit of Dark Emu and examined some other themes, tangential to Dark Emu but common within modern Aboriginal discourse.

Let me regale you with one example. 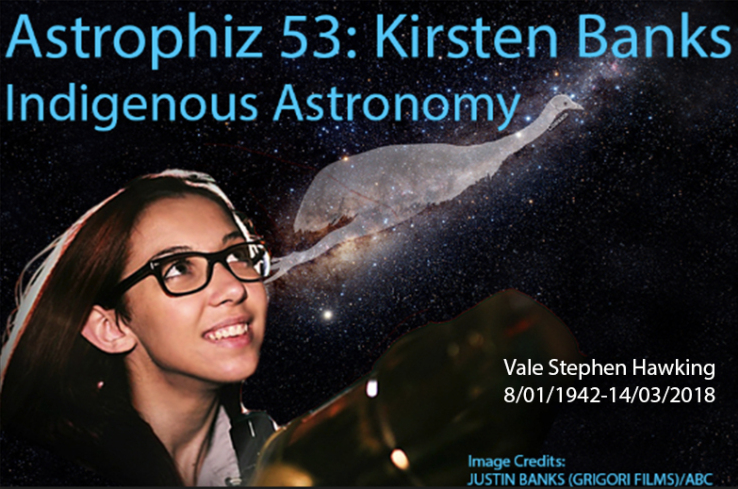 Did you know that Aborigines were the world’s first astronomers?  No?  Well, we have this from no less an authority than proud Wiradjuri woman  Kirsten Banks.  Kirsten graduated from UNSW in 2018 with a Bachelor of Science degree in physics.  Her Wikipedia entry describes her as an astrophysicist and science communicator.  A “science communicator” at the Sydney Observatory, she has accumulated considerable media coverage, including a Cosmos profile in which she recalls how her grandpa, an engineer, encouraged her to make a career in science.  She has just completed her Honours year, ‘dreams of becoming a world-famous science communicator’ and has this say about her indigenous roots:

I always knew I had Aboriginal heritage on my father’s side, but I didn’t know much about it … When I examined my family history more closely, I discovered my ancestors are Wiradjuri. I was given the contact number of an elder to learn more, who turns out is my great aunty.

Ms Banks features on a webpage entitled Australian Indigenous Astronomy, along with astrophysicists, educators, researchers and published elders — including, of course, Bruce Pascoe, who is described as a Bunurong Elder.  This website tells us:

Indigenous astronomy is the first astronomy – the astronomy that existed long before the Babylonians, Greeks, the Renaissance, and the Enlightenment.

That may be true as far as it goes but ‘indigenous’ in this context does not mean Aboriginal.  It really refers to primitive people the world over.

The website also includes this nugget, which will bring no comfort to those wondering and perplexed about what is going on in Australia’s schools, where Pascoe’s prolix piffle already occupies a place of honour and reverence:

We are happy to announce that the new National Curriculum incorporating Indigenous Astronomical Knowledge is now available for teachers and educators via the University of Melbourne Indigenous Education web portal.

The 14 Units are aimed at Years 5 & 8, and show how Indigenous Astronomy can be incorporated into the seven learning areas of Science, Mathematics, The Arts, English, Technologies, Humanities and Health. Please take some time to explore.

University, the American Duane W. Hamacher, one of whose published papers bears the fascinating title, “Whitening the Sky: Light pollution as a form of cultural genocide”

Australian Aborigines certainly studied celestial bodies and events – as have all primitive peoples. They devised myths and legends based on these observations and even made practical use of their observations for, say, navigation or prediction of seasons – as all primitive peoples have done.  But they did not use “mathematics, physics or chemistry”  to explain their origin or evolution, as the same Wikipedia so enamoured of Pascoe puts it. (“a natural science that studies celestial objects and phenomena. It uses mathematics, physics, and chemistry in order to explain their origin and evolution”)  I’m sorry to rain on Ms Banks’s parade but Indigenous Astronomy is not astronomy; rather, it is a branch of anthropology – a worthy field of study, certainly.  But are they seriously suggesting Aborigines acquired astronomical knowledge or insights that have eluded Western science all these years?

Just the other week I was exploring in the bush and came across some beautiful rock carvings that appeared to show seven planets, plus the moon, all in a line. Back when there was no light pollution you would have had the ability to see six planets in the sky with the naked eye. Mercury, Venus, Mars, Jupiter, Saturn and Uranus. I kept looking and thinking, and I realised that there was one planet missing. Surely it couldn’t have been Neptune, the farthest major planet in the solar system, because it’s not physically visible to the human eye. I realised that this eighth circle could be the Earth. I was flabbergasted – this could be evidence of our people knowing that Earth is a planet along with the others in our night skies, orbiting around a bright hot star called the sun, a millennia before the likes of Galileo, who discovered this a mere 400 years ago!

Rich astronomical knowledge that dates back over 65,000 years runs through our veins. We should embrace it. Why? Because we are the first astronomers!

What an extraordinary find, I thought, hunting in vain on The Guardian website for a picture of this remarkable petroglyph and longing to see the work of this anonymous antipodean Galileo. If only Kirsten had shared images of these providential carvings, we could all share her wonder.  Could we have another Professor Jim Bowler, who uncovered Mungo Man, in this young lady? Let us hope so. To aspire merely to the recognition and methods of Bruce Pascoe would sell short such an intrepid explorer.

Indigenous Astronomy, no doubt a worthy field of study, should be more accurately termed Celestial Anthropology. A number of commentators, including Jacinta Price, Warren Mundine and Josephine Cashman, have opined that Pascoe’s thesis demeans Aborigines.  I would contend that this type of patronizing is just as demeaning.

But why are so many Aboriginal champions, such as Professor Marcia Langton, prepared to go along with this myth?  It is because Dark Emu has an underlying political objective, one that goes to the question of a separate sovereignty.  Aboriginal activist Amy McQuire, writing in New Matilda shed some light(emphasis added):

While it is great that Australia is so ready to engage with the reality that Aboriginal people had a complicated land management system, I feel that their acceptance of this truth at the expense of the dark history of the frontier wars shows they do not fundamentally understand the vital importance of Pascoe’s work – and the far-reaching implications of it.

Ms McQuire goes on to postulate that the accepted principle that Australia’s settlement was largely peaceful only holds (under the international law of the time) if the continent was inhabited by nomadic hunter/gathers, rather than a settled population of agriculturalists.  In the latter circumstance, Britain would have needed to either negotiate a treaty or engage in a war of conquest — circumstances which would have obliged to the recognition of Aboriginal law.  McQuire goes on:

Recognising Aboriginal agriculture and land management not only means recognising the humanity and intelligence of Aboriginal peoples, but that this land was taken by conquest, and sovereignty has never been ceded.

If Pascoe’s story becomes the accepted narrative and displaces all the history that has gone before – history written by reputable historians, not blatant mis-quoters of primary sources – that would help establish a firm case for inclusion of a special place for Aborigines in the Constitution, leading in turn to a demand for sovereignty. Such an entity would not be based on geography but on ethnic identity.  That is why, one suspects, so many activists are happy to go along with Pascoe’s utter nonsense, regardless of how demeaning they must know it is to be heaping accolades on a fraud.

At present Native Title exists on about 30 per cent of the continent.  There are extant claims for another 30 per cent, much of which, going on past performance, is likely to be granted.  For example, there is a claim currently with the Native Title Tribunal for all of the NSW South Coast, from Sutherland Shire. just south of Sydney, all the way down to Eden, on the Victorian border.   Even before the case has been decided, Kiama Council has chosen to confers with the local Aboriginal Land Council before undertaking any construction work on public land. I have asked  local state member Gareth Ward what position the NSW government is taking on this claim and have been given to understand thee is still a lot of mulling going on in the party room and elsewhere.  Considering the Aboriginal population in my area is miniscule and that they are  thoroughly integrated into mainstream Australian society, I would think it only proper that they oppose this application.

Under the type of Aboriginal sovereignty arrangement I have described, my next door neighbour, were he or she as black as, say, Ms Banks, the star child, I could find myself living under a different and entirely race-based set of rights and responsibilities than the bloke next door. Quadrant‘s Keith Windschuttle explains this much better than I ever could in his book The Break-Up of Australia.

The long march of Pascoe’s fake history into the education system and popular imagination is already well advanced.  How long before the university history faculties succumb completely is anyone’s guess. Mine would be sooner rather than later.

NOW, if you’ll pardon me once more, comes the shameless plug.  The only way Pascoe can be exposed is if books such as mine gain a wide readership, so much so that Pascoe’s enablers and apologists will be forced to take notice and, hopefully, respond.  This is where you come in.

For those of you who ever watched At Last the 1948 Show, you may remember the skit  ‘Make the Lovely Aimi MacDonald a Rich Lady Fund’. Well, this is my equivalent.  I’m not particularly lovely and this certainly won’t make me rich, so let me dub the project as the ‘Let’s Deny Bruce Pascoe a plaque on Circular Quay’s Writers Walk and help prevent the break-up of Australia in the process’.

Professor Geoffrey Blainey described Bitter Harvest as a ‘powerful critique’.  This new edition is, if I say so myself, much better.  If you are looking for a Christmas present,  know Bitter Harvest is more than a book — it is a shaming aimed at the restoration of sanity, accuracy and a respect for truth in the writing of history.

You can order the new edition of Bitter Harvest by clicking here.

Managing the media for propaganda

The Rebranding of Abortion Inc.