Schizophrenia at
the Parkville Asylum 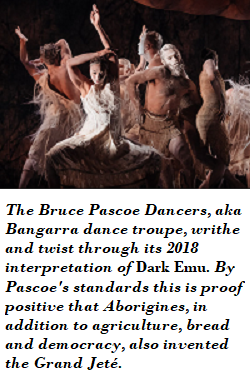 You couldn’t make this up.

In what is to be hoped will be the near future, Melbourne University Press will be publishing  Australia Before Conquest: An Assessment of Bruce Pascoe’s Dark Emu by the anthropologist and linguist Peter Sutton and archaeologist Keryn Walshe. The galleys are now being fitted with maps and other illustrations and, all going well and no COVID-19 complications intervening, it should be available before year’s end. Need it be said that a noted authority on Aboriginal Australia past and present — Professor Sutton, is the author of The Politics of Suffering — is likely to be extraordinarily critical of a fauxborigine’s immensely lucrative piffle, a species of nonsense now being foisted on Australian children as – such gall! — “a truer history“?

That is happening in one corner of the university campus. Elsewhere at the Parkville Asylum, a nice office is being prepared for the Charlatan of Gypsy Point, who has been appointed Enterprise Professor in Indigenous Agriculture at the Faculty of Veterinary and Agricultural Sciences.

So, with one hand Melbourne University exposes a monumental fraud. Meanwhile, the other hand rewards those same lies with the prestige and remuneration of an august professorship.

This was too much for Peter O’Brien, whose Quadrant book, Bitter Harvest, belled the cat of Pascoe’s whoppers. His letter to Melbourne University Vice-Chancellor Duncan Maskell, written in the ink of disgust, is reproduced below:

Dear Professor  Maskell,
I read with astonishment that Mr Bruce Pascoe had been appointed by the University  of Melbourne as Enterprise Professor in Indigenous Agriculture at the Faculty of Veterinary and Agricultural Sciences. My astonishment is based on the fact that Indigenous (in the sense of Australian Aboriginal people) agriculture is a contradiction in terms.  There is no such thing as Aboriginal agriculture.

Mr Pascoe claims to have proved that, contrary to 200 years of accepted wisdom, Australian Aborigines were not essentially nomadic hunter/gatherers but sophisticated agriculturalists.  He has published that claim in his hugely successful polemic Dark Emu.  I have shown comprehensively, in my own book Bitter Harvest – The illusion of Aboriginal Agriculture in Dark Emu, that Mr Pascoe’s claims are based on a litany of lies and misrepresentations. In fact, the very paucity of what genuine evidence he does provide simply reinforces that Aborigines were, in fact, nomadic hunter/gatherers as we have always, hitherto, believed.

Certainly, Mr Pascoe is a vocal practitioner and advocate for the use of native Australian flora as a sustainable substitute for more traditional crops but, in this respect, he is no more qualified than any other small-scale boutique farmer to aspire to the status of ‘professor’ at a leading university.

I have no real hope that this ludicrous appointment will be reversed but could I suggest that you advise senior staff to be more rigorous and circumspect in making such appointments, which seem to be based more on ideology than academic excellence.

Bitter Harvest can be ordered here