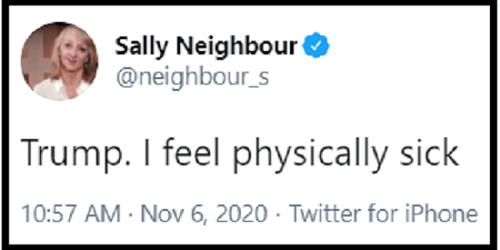 One of Twitter’s traps for the unwary is the passion of the moment. Overcome with zeal, users sometimes signal to the world opinions and appraisals that for the sake of their reputations might better have been kept private. This is particularly the case with members of the media class, who seem especially prone to tearing off the mask of impartiality and allowing their visceral hatreds and sympathies to pour forth — people like 4Corners executive producer Sally Neighbour, for instance.

That’s her tweet above, sent out on Friday morning as Donald Trump went before the cameras to announce he would contest all the way to the Supreme Court some deeply suspicious state election returns.

The chances are that Ms Neighbour will zap her tweet when a more sober frame of mind suggests circumspection would better protect her show’s reputation for straight-bat reporting, such as it is. Meanwhile, it explains a few things.

Some two years ago, Ms Neighbour’s colleague Sarah Ferguson put together a ludicrous three-part ‘expose’ of Donald Trump’s alleged fealty to Vladimir Putin. Every single charge has been disproven but the series remains uncorrected on the ABC website. One guesses it would make her “physically sick” to concede Trump really isn’t the spawn of a Moscovite Satan.

It also explains why Ms Neighbour’s ABC has pointedly declined to pay more than the slightest attention to the scandals emerging from Hunter Biden’s abandoned laptop, with only one mention (and that dismissive) of Tony Bobulinski who confirmed much of its contents. No doubt reporting the facts would have made even more ABCers “physically sick”.

Still, there can be no doubt there are some things the ABC does very well indeed. As Tony Thomas explains, while the national broadcaster isn’t capable of reporting politics and world affairs without bias — check out how many fellow ABC staffers share Ms Neighbour’s nausea — it is a world leader in jokes about poo, wee, group sex and big dicks.

3 thoughts on “The ABC’s Madame Nausea”

The Bromberging of Free Speech