First They Came for Victorians 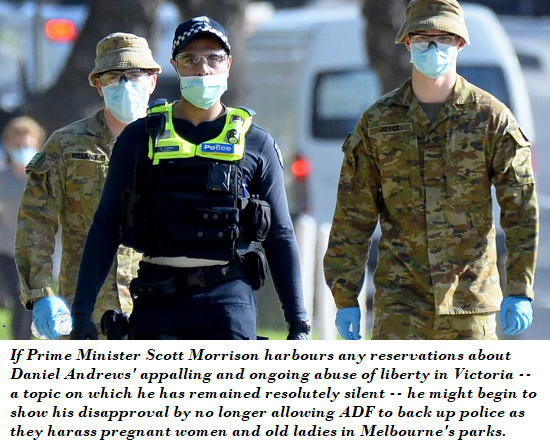 The Victorian government has introduced a bill in Parliament that gives sweeping powers to certain “authorised officers” to arrest and detain people for an indefinite period of time. The proposed legislation effectively consolidates Victoria as a police state where informers and collaborators will assist the authorities in tracing and incarcerating their fellow citizens without warrants, on the basis of prospective conduct.

Called the COVID-19 Omnibus (Emergency Measures) Amendment Bill, this proposed legislation will operate side-by-side with the powers already in operation under the current emergency powers. Its provisions are so broadly construed that any person could be detained for almost anything.  These laws will override all other laws and confer extraordinary powers to the Secretary of the Department of Health to appoint public servants as “authorised officers” with the same powers as police. As candidly stated by Jill Hennessy, Victorian Attorney General, in her second reading speech:

The Bill will provide further emergency powers to authorised officers to issue detention notices and detain particular high-risk persons if the authorised officer reasonably believes that a person is likely to refuse or fail to comply with a direction made by the Chief Health Officer … This amendment will enable the authorised officer to detain individuals for the purpose of ensuring compliance with the relevant direction during the COVID-19 state of emergency. [1]

In other words, these laws allow any person the Department of Health and Human Services deems appropriate to become an “authorised officer” to detain people on the belief that they are unlikely to comply with emergency directions. Anyone may be arrested for an indeterminate period of time if such an officer happens to believe the individual is likely to fail to comply with an emergency direction. As such, fundamental legal principles inherited from our common-law tradition, including due process, the presumption of innocence and recourse to the writ of habeas corpus, would be substantially undermined.

This latest development in the consolidation of an oppressive, authoritarian regime, ‘seeks to enlist the population as informers and arms of the state in rounding up others who are guilty of no offence’.[2] Under these laws “authorised officers” will be able to detain fellow citizens if ‘a direction has been given in the exercise of an emergency power’, or if they ‘reasonably believe that a person who is required to comply with the direction is a high-risk person and is likely to refuse or fail to comply with the direction’.[3] Citizens will be detained by such officers for an indefinite period and there is no reference to what sort of training is required. As political adviser Ian Hanke points out,

These extraordinary powers are arbitrary and extreme. They are a draconian attack on civil liberties the like of which Australia has never seen before. Further because all laws are overridden there would appear to be little recourse to any excesses by an authorised officer or their civilians co-opted by them. These laws are so broad and ill-defined that you could be detained for almost anything.[4]

Passed without amendment in the Labor-controlled Legislative Assembly on September 18, the bill is now being debated in the Legislative Council, Victoria’s upper house, and will be put to a vote soon.[5] Premier Andrews says he is engaged in a “negotiation” process with Council backbenchers. He argues the provisions are necessary but is unable to specify circumstances where they have previously been required.

If this bill is passed, an authoritarian regime will be finally consolidated and there will be an end to the rule of law and legal guarantees that so far have protected the population against all sorts of abuses of power by the State.

It is important to consider that we have already seen police arresting people simply because they have promoted on social media protests against draconian measures. One example of such arbitrariness occurred on September 3, when Victoria police arrested a pregnant mother in front of her young children in their Ballarat home. Zoe Buhler was arrested and charged for posting a Facebook message encouraging people to protest against lockdowns in the regional town on 5 September. She said she was totally unaware that she could be doing anything illegal and police could just have called her, to simply ask her to remove the post. She also said she did not believe COVID-19 is a hoax, and only wanted to protest about the impact of lockdown measures on employment and suicide.[6]

What is happening here is deeply tragic. The Australian Prime Minister has the moral (and legal) duty to inform the Victorian Premier of the unconstitutionality of such oppressive measures, and that his government will intervene in favour of the people of Victoria in order to prevent any further violation of fundamental rights.

It is deeply disheartening for me, not just as a constitutional law professor but as a former Senior Vice President in one of the Divisions of the Liberal Party in WA, to witness the tacit consent provided by the Morrison government to all these authoritarian measures. Above all, if this government really valued fundamental legal rights and the principles of constitutional government, there would already be enough grounds for a federal intervention in the State of Victoria.

But the sad reality is that Victorians have been miserably betrayed by their federal and state governments in many ways and on many levels. Premier Andrews is a leader of authoritarian inclinations and the Morrison government has tacitly consented to the deplorable oppression of the Victorian population. For all intents and purposes the State of Victoria has now effectively become an elected dictatorship.

Dr Augusto Zimmermann PhD, LLM, LLB, DipEd, CertArb is Professor and Head of Law at Sheridan Institute of Higher Education in Perth/WA, and Professor of Law (Adjunct) at the University of Notre Dame Australia, Sydney campus. He is President of the Western Australian Legal Theory Association (WALTA), and former Law Reform Commissioner with the Law Reform Commission of Western Australia, from 2012-2017 (appointed by then state Attorney General Christian Porter). He is co-editor of the forthcoming ‘Fundamental Rights in the Age of Covid-19’, a book to be published by Connor Court with contributions from leading legal academic and policy makers in the field.

[2] Editorial, ‘Bill To Create Police State Has No Place In This Nation’, The Australian, 23 September 2020. <https://www.theaustralian.com.au/commentary/editorials/bill-to-create-police-state-has-no-place-in-this-nation/news-story/0820634e3c835cc8c6733bf6a45bb793>

14 thoughts on “First They Came for Victorians”

Letter from London: Cometh the Hour