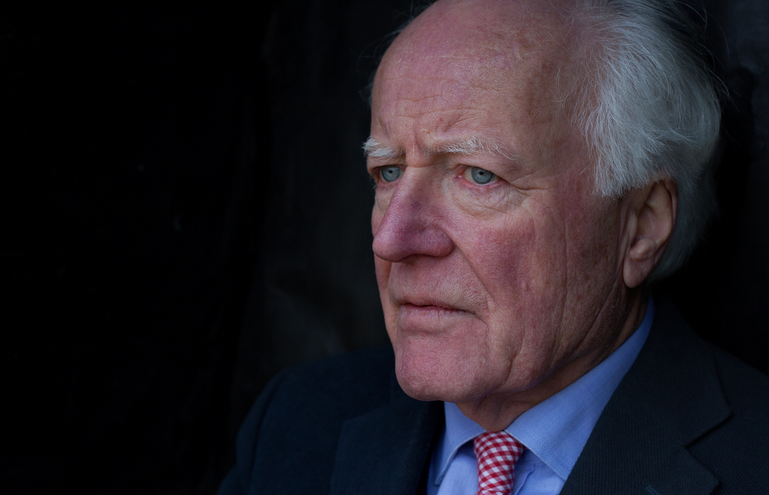 Desmond Guinness (above), the charming champion of the Irish Georgian house, died August 20, during Ireland’s National Heritage Week. He was 88. Born on September 8, 1931, the younger son of the jeunesse dorée of the 1920s, Diana Mitford, the most beautiful of those sisters, and Bryan Guinness, son and heir of Hon Walter Guinness, recently Minister for Agriculture and soon to be created Baron Moyne.

Born in Buckingham Street, the Guinnesses’ London house, one of Desmond’s first visitors was Lytton Strachey. Well, one of his mother’s visitors – as Strachey famously disliked children. When the nurse came into the room with dark-long-haired Desmond, Strachey shrieked ‘Is it a wig?’ When he was one, he moved with his mother, brother Jonathan and six servants to Ebury Street (leaving at least a brace of them behind) so she could be closer to her lover, Oswald Mosley. Despite Diana’s wish for her sons (as she wrote to her sister, Unity, in 1936), ‘I would so love them to be blessed by a glimpse of the Fuhrer’, Desmond did not meet Adolf. He was shocked to learn in his early seventies that his beloved Nanny, Growler, had been recruited by his grandfather, Lord Moyne, to spy on his mother, given her devotion to Mosley and the Fascist cause. It was Lord Moyne who convinced the government to imprison Diana in 1940.

At 10, he would spend the odd day at Holloway, where his mother was incarcerated. On her release, the two Guinness boys (‘the kittens’) and their half-brothers, Alexander and Max Mosley (‘the foals’) were reunited. Jonathan recalled 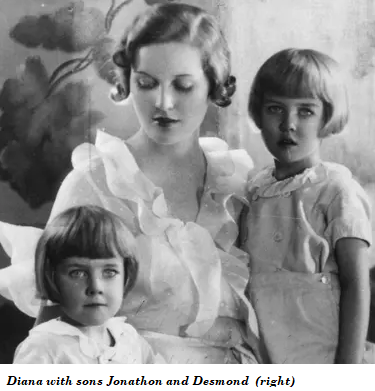 them as all obsessed with food and when their mother came home to announce that their Aunt Pam’s dachshund had drowned in The Windrush, “There’s terrible news, I’m afraid,” said 13-year-old Desmond, then lamenting, “What? No sausages at Hammett’s?” Possessed with much charm and the great good looks of both his parents, even his Aunt Jessica, long estranged from Diana, was fond of him. Yet he remained devoted to his mother. Calling on 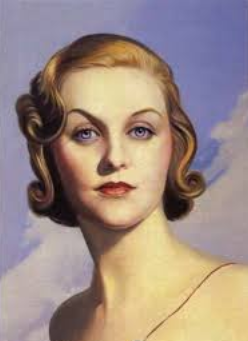 Desmond in 2003, a Times reporter saw him look at his mother’s portrait by William Acton (right) ‘for what must be the millionth time’, and hear him say, “Have you ever seen someone so beautiful?”

After Eton and Gordonstoun — like two of his brothers, he was expelled from one of his schools (or, as his grandmother, Sydney ‘Granny Muv’ Redesdale put it about Aunt Unity ‘No, not expelled, darling, Asked To Leave’) — he read French and Italian at Christ Church Oxford. Ever the dandy, he would cut a dash in leopard trousers. He then did his national service.

In 1951, while at Oxford, Desmond was introduced to the extraordinary Princess Henriette Marie-Gabrielle von Urach (Mariga) by her cousin, Prince Rupert Lowenstein. She was a granddaughter of the 2nd Duke of Urach, who had accepted a short-lived invitation to be King of Lithuania and had also put his hand up to be King of Albania (a monarch manqué?). Her father, Prince Albrecht was an artist and friend of Picasso, Munch, Dali and Braque. He once painted a sketch of Hitler, who rejected it, saying that the staring eyes made him look like a madman. In 1941, Mariga’s mother, Rosemary Blackadder, a half-Scottish/half-Norwegian Girton girl, was committed to an Edinburgh asylum, lobotomised and never recovered. So Mariga – born with so many grand connections but no real family – was brought up in Surrey by her godmother and 17 governesses. Her biographer, Carola Peck (Mariga and Her Friends, 1998) described her as, “part bare-footed Slovig, part Tennysonian pre-Raphaelite and part 18th century rationalist.” 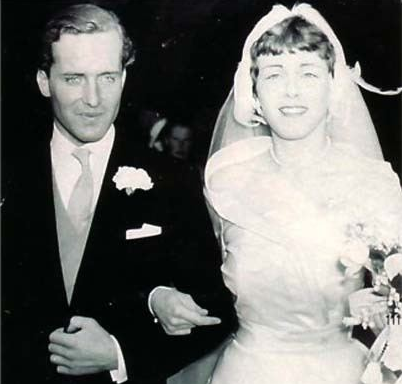 Mariga and Desmond wed in Oxford in 1954 (above). “I got the pretty one,”, she would say, comparing Desmond to his Oxford contemporaries. They moved to Ireland in 1956. Anglo-Irish certainly, he was, still the great-great-great-great grandson of Arthur Guinness. Bryan (by then he had succeeded his father as 2nd Lord Moyne, remarried and was the father of a further nine children) was Vice-Chairman of the Guinness Board and lived half the year in Dublin; while the Mosleys were then living at Clonfert Palace in East Galway. Desmond was first employed to oversee his father’s properties. He and Mariga rented Carton House, at Maynooth, a Georgian jewel built for the FitzGeralds, earls of Kildare and dukes of Leinster. Mariga recalled, “Ireland is HEAVEN, everyone is so dotty and delicious and no one dreams of taking anything seriously; except, perhaps the Horse Show.”

In 1958 this ‘madly beautiful’ couple revived the Irish Georgian Society to “fight for the preservation of what is left of Georgian architecture in Ireland”. As he put it, “the Battle of the Boyne provided the first 100 years of peace and prosperity we had known since the medieval high kings. Art and architecture flourished for the first time. As a result, we plunge straight from the castle stronghold to the classical house”. With Lord Talbot de Malahide, Sir Alfred Beit, the Knight of Glin and Lady Dunsany, “the remnants of the ascendancy seeking to preserve what was widely seen as the heritage of the ascendancy”, they were dismissed, by chippy politicians, as “a consortium of belted earls”. Yet they would save Damer House, The Conolly Folly, Mountjoy Square, Tailors’ Hall, Hume St and the Dromana Gateway.

When Mariga was restoring (the now demolished) 50 Mountjoy Square she had the team repaint the walls nine times to get just the right shade of blue. In 1967, with a loan from Bryan, they bought and began to restore the mighty Palladian Castletown House (below), Kildare, built in 1722 for William Conolly, Speaker of the Irish House of Commons. Desmond recalled lead being stripped from the roof and people ripping out the light switches. The Guinnesses energised scores of volunteers — students on the top of ladders painting cornices, children scrubbed floors; even the oldest of the old were able to polish the beautiful door handles.

In 1958, at his father’s urging “Really, dear boy, it’s about time” Desmond had spent a third of his fortune on Leixlip Castle, a Norman keep at the confluence of the Liffey and Rye. It was at Leixlip that Arthur Guinness had established his first brewery in 1755. The Castle was so dilapidated the electricity board refused to reconnect its power, while most of the bathtubs had been put out in the fields as troughs for cattle. When Desmond was away on business, Mariga moved in with “400 books, a cat and a rifle”. Bryan gave them an Arab stallion and a friend gave them two beds and her butler. Such was their eye for detail in the restoration, even the swimming pool has battlements. In The Inspiration of the Past (1985), architectural historian John Cornforth described Leixlip (below) as “the key country house in the British Isles in the late 1950s and 1960s…..It managed to be stylish and unfussy; quite grand and yet informal and cut-back; and everywhere there was both a vivid historical air and a sense of fantasy.” Desmond’s aunt, Nancy Mitford, who visited in the 1960s called it “the epitome of civilised taste.” The celebrated decorator Christopher Gibbs observed that, while the style of Nancy Lancaster, Queen of the English country house, had been ‘patrician’; Mariga’s was ‘princely.’ Desmond filled Leixlip with Irish furniture – a gilt mirror from mid-18th century Dublin, a dining room sideboard from Malahide; a 1740s Kilkenny marble chimneypiece from Ardgillan Castle. 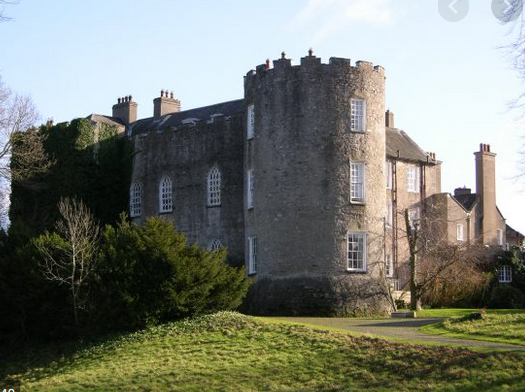 They also filled Leixlip with people. Mark Girouard recalled “millionaires, Irish professors, Anglo-Irish lordlings, pop stars, German princes, architects, priests, art historians, students, all revolving around Mariga, with her drawling voice and mischievous smile, and Desmond, with his charm and blazing blue eyes.” Carola Peck wrote, “In the winter of 1958, Mariga and Desmond said they did not go to bed until 4am from the beginning of December until the end of January. They were out every night – ball followed ball. Parties at Leixlip went on into the morning. When Desmond got tired, he wound up the antique Gothic organ which played God Save the King. This told everybody to go home.” In the sixties, Mick Jagger was a frequent guest and Marianne Faithfull (below with Desmond)would sing in front of a fireplace. 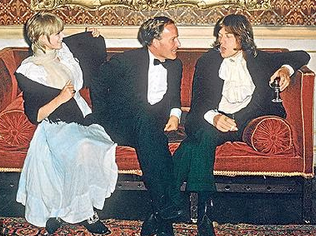 By the late 1960s, Desmond and Mariga had become estranged. In 1973 Desmond met another beauty, Penny Cuthbertson, a muse of Lucian Freud and subject of his celebrated ‘Naked Girl’. For some time, Desmond, Mariga and Penny shared Leixlip and would attend meetings of the Irish Georgian Society together. Mariga told a reporter: “My husband and I really get on quite well, in a disagreeable kind of way.” She eventually, reluctantly left Leixlip and in 1981 she and Desmond divorced. Mariga, increasingly eccentric, erratic and sad died in 1989 and was buried at the Conolly Folly, her first project and the work of Lady Louisa Conolly whom she worshipped as the chatelaine who had restored Castletown House in the 1760s and 1770s.

Penny brought some serenity and order to Leixlip. It was interesting that this union also brought together the two great unconsummated loves of Evelyn Waugh’s life.  He had been smitten with Diana Guinness before the birth of her eldest son, Jonathon, and it was to Bryan and Diana that he dedicated Vile Bodies in 1930. Penny was the only daughter of Waugh’s other great love, Teresa (‘Baby’) Jungman. She and elder sister Zita were the very last of the Bright Young Things, and having sold their house in 1990, applied for rooms in a convent. They were presented with a questionnaire. The first question was: “Are you incontinent?” They had no idea what this meant, but imagined it must be a good thing and answered: “Yes, very.” Both were refused admission. In 1995 they joined Desmond and Penny, settling in a cottage built in the grounds of Leixlip and lived there happily until they were 102.

Desmond wrote a number of well-regarded works on architecture: Portrait of Dublin (1967); Irish Houses and Castles (1971); Mr Jefferson, Architect (1973), Palladio (1976); Georgian Dublin (1980); The White House: an architectural history (1981); two studied with Jacqueline O’Brien, Newport Preserv’d (1982) and Great Irish Houses and Castles (1992) and Dublin, a Grand Tour (1994). He was writing his memoirs in 2003 but they have not yet been published. In 1980, he was awarded a Doctor of Laws by Trinity College, Dublin. His wife, Penny, survives him and his two children by Mariga, Marina and Patrick.

The name of Guinness in Ireland is legendary; Desmond Guinness has burnished it. One could easily say ‘This Guinness was good for you’.

3 thoughts on “Desmond Guinness, Good to the Last Drop”

The Sun Sets in the West