Past Time to Scuttle Guilt-Edged ‘History’ 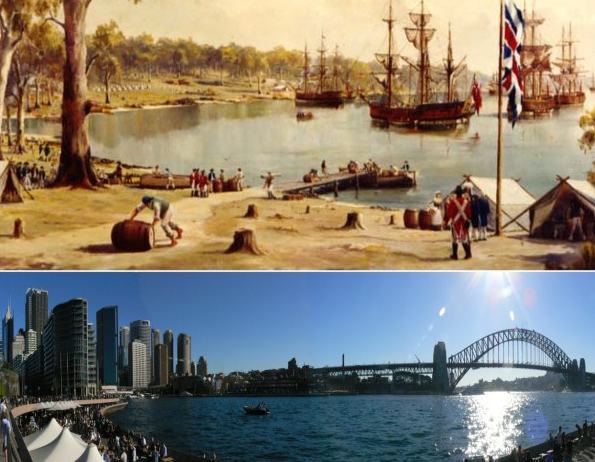 The campaign against Australia Day persists. In addition to the usual academic twisters of history, the grievance industry and rent-a-mob types, a number of local government councils across the country continue to wage war on January 26, the day in 1788 when First Fleet Captain Arthur Phillip sailed into Port Jackson,  proclaimed a new colony and played midwife to the birth of the nation to come.

The councils, mainly inner-city bastions of the Left, claim Australia Day is insensitive to indigenous Australians and should be changed. I’m sure many will agree that councils would be better off sticking to their knitting — the three Rs of  local government: roads, rubbish and rates — instead of engaging in divisive historical revisionism.

Whether one likes it or not, modern Australia is a product of British settlement. This is an immutable fact and we should not remove January 26 from our calendar in an effort to appease virtue-signalling activists who argue the First Fleet’s arrival is nothing but a source of shame. They are, in effect, asserting that our entire national existence is lamentable. They are declaring that Australia itself is illegitimate.

Most ordinary Australians will take a very different view. Upon the foundations laid by the early settlers, Australians have built one of the world’s most prosperous, stable, fair and free societies. It has provided a high quality of life for tens of millions and become a magnet for migrants from across the globe. Even though our political system is now suffering due to the venal major party duopoly, Australia can still claim to be one of the world’s oldest continuous democracies. It is a country with one of the world’s most admirable human rights records.

And it is also worth noting that Australia was no ready-made bonanza; the early settlers and their descendants had to summon sheer grit and employ much resourcefulness to build a nation. The transformation of a collection of remote penal colonies into a successful and attractive society within the space of a couple of generations is a remarkable feat.

Commemorating January 26 is not to deny that indigenous Australians have suffered loss, displacement and hardship in the past. It should be a day that is marked with humility and reflection as well as respectful pride. There is no country on the planet with an unblemished record, nor too many — Japan is the exception that immediately springs to mind — which has not seen waves of conquest and migration. Nearly every square kilometre of Europe has been stained with the blood of different peoples fighting for territory. The same situation applies across Asia and other continents. The various Aboriginal tribes themselves engaged in long-running warfare – conflicts that continued in some cases after the arrival of Europeans.

We should cease pretending that the relatively peaceful colonisation of Australia at the hands of the British makes the country uniquely tainted or that erasing monumental events from our national calendar will somehow change the past. In his book The Strange Death of Europe, British author Douglas Murray explores how Western liberal elites have lost confidence in their own culture and have been swept up in a tsunami of guilt over past national and civilisational sins. For such people, guilt has become, as Murray puts it, “a moral intoxicant”. In what might be called auto-masochism they appear to get high on it. In Australia’s case, Murray notes that the historic treatment of the Aborigines is a subject that has in recent decades “moved from the margins of public debate to the core – to the country’s deepest, founding sin.”

But what can actually be achieved by wallowing in guilt over this purported “founding sin”? Murray writes:

Even if Australia had been born in sin, there is nothing that can be done to rectify it, other than – centuries after its founding – for everyone in Australia to be divided out by race and those believed to have descended from the earliest settlers ordered to hand over their wealth to anyone believed (after appropriate genetic testing) to be descended from indigenous peoples. The genetic codes of those of mixed race would perhaps be adjudicated by a genetics court, which – depending on the findings – might then order people to give up some wealth, get a cash windfall or keep a precise amount, depending on their DNA results.

Murray’s point, of course, is that such a scenario is as absurd as it is hideous. Clearly, we are going to need to find new ways to deal with our past, ways that don’t involve perpetual remorse and self-flagellation. A country run by people who don’t see the merit in their nation’s own foundation probably doesn’t have much of a future. We should also stop pretending that pre-1788 Australia could have remained forever hermetically sealed off from the outside world. At some point settlers or migrants from other lands were going to arrive on Australian shores, bringing with them radically different customs, traditions, beliefs and ways of life and disrupting the Aborigines’ long-standing cultural isolation. How much would today’s blacktivists have to complain about were it the Spanish or French who planted their nation’s flags at Botany Bay?

As Geoffrey Blainey observed in A Shorter History of Australia:

The shrinking world was becoming too small to permit a whole people to be set aside in a vast protected anthropological museum where they would try to perpetuate the merits and defects of a way of life that had vanished elsewhere, a way of life that — so long as it continued — would deprive millions of foreign people of the food and fibres that could have been grown on the land.

While often couched in the language of “justice”, it is hard not to draw the conclusion the push to change Australia Day is part of the wider, sustained assault upon our heritage, designed and promoted to undermine the legitimacy of mainstream Australia and make Australians, particularly those of European descent, feel guilty for simply existing. This tiresome and misguided self-loathing is particularly evident in the education system, where the black armband view of history reigns almost completely unchallenged. Internationally, Australia is seen as a success story. Domestically, however, the leftists who dominate education and the media assert that our country is irreparably tainted by past and enduring misdeeds. Anglo Australians in particular are told they have no history worth celebrating. Indeed, according to an indigenous woman who was part of the team negotiating a “treaty” with the Victorian government of Premier Daniel Andrews, all trace of European presence and influence on this continent needs to be “burned to the ground”.

Such an unbalanced interpretation of our history is not only wrong but harmful to our prospects as a nation. How can we expect the vast number of new migrants who arrive every year to embrace our country when we teach that mainstream Australia is sinful and illegitimate? Newcomers are unlikely to assimilate into our national community and adopt our culture if we keep telling them that the nation to which they have come has very little of which to be proud, being a construct of racist and rapacious interlopers. There is a real risk we will end up with less New Australians and more resentful characters like Greens Senator Mehreen Faruqi, the self-proclaimed “brown, Muslim, migrant, feminist” who used her maiden Senate speech to attack Australia’s very legitimacy. In that address she quoted a favourite verse in Urdu by the poet Mohammad Iqbal, never bothering to translate the stanza. Well here it is in English, and do notice the final line

And “claimed” Australia will be unless those quietly proud of our past reject and combat the campaign of a relative few to slander and erase the justifiable pride we are all entitled to take — Aborigines, convicts’ descendants and relatively new arrivals alike — in our history, mostly honourable conduct and unique culture.

A Tax Revolution To Reboot The Economy