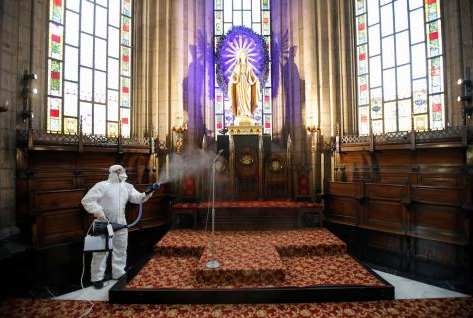 Atonement for global warming is made to mother-earth-god Gaia by building modern-day idols. Follies in the form of useless solar and wind farms. Everyone knows they don’t and can’t work, even Michael Moore ( watch Planet of the Humans). But that is not to the point. Dues must be paid. Sacrifices made.

However, the absence of religion leaves a yawning chasm. Paying for the sin of global warming can’t fill it all. In such circumstances, COVID-19 is a godsend (so to speak) for idolaters. Kow-towing to authoritarian leaders, viewing pointless social-distance measures as sacrifices for the common good. Imprisoning the impure in apartment buildings. It all has a pseudo-religious feel to it. Look at the English moronically clapping into the skies; thankful for nurses and doctors tending the sick. Hmm? Kind of thought that was their job.

And like the old pagan gods, this COVID-19 is very capricious and demanding. Spiking here, spiking there, spiking almost everywhere, even among those in nursing care. Each flurry of spikes calls forth the need for sacrificial lockdowns (including, take particular note, of churches and hymn singing).

What a nice mess it’s got us into. Destined to travel a stop-start road into a diminished future. Though as befitting any quasi-religious movement, its high priests like Scott Morrison and Gladys Berejiklian and their minions (or is it masters) in public health are lauded and praised for their wisdom. Mind you, they must thank their lucky stars for Premier Daniel Andrews.

Andrews is the fall guy who makes everyone else look wiser. Now, far be it from me to say anything positive about the unrepentant leftie down south but exactly how is he so different from any other political leader? Most are incompetent; all are captives of blinkered public health officials. All keep lockdowns in their back pocket ever ready to appease COVID-19.

If you think it is a long bow to associate combatting global warming and a virus with faux religiosity, imagine a more rational world. God is in his Heaven and common-sense predominates on Earth. Global warming is put into a more measured perspective and, as applicable, the combined use of cleaner coal, gas and nuclear power is identified as an effective solution. And COVID-19?

I can do no better than cite part of a comment by J R Ewing on the Manhattan Contrarian site (6 July):

I understand that this virus is new … But the question I cannot figure out is this: Have these people never heard of an illness before? Sickness is a part of life. Until the mid-20th century, there was LOTS of nasty stuff out there that you could catch and there weren’t any vaccines or antibiotics: Polio, Tuberculosis, Measles, Smallpox, Chicken Pox, Whooping Cough, Scarlet Fever … Why is the situation now different? You mean we have illnesses that modern technology can’t prevent? So, we should all just give up and hide under the bed? It’s not the “panic porn” that bothers me, it’s the implicit lack of perspective. No one has any appreciation of risk or history or death. Our modern lives are so antiseptic and so irreligious that we cannot deal with a minor threat like this one without thinking it’s the end of civilization, worthy of extraordinary actions.

Now the virus is real and, stretching a point, global warming might possibly be real. Racism in Western societies isn’t real. There is no systematic racism directed against black or brown people. There used to be. There isn’t now. Never mind, combatting made-up racism (unconscious or subliminal racism for example) allows yet more scope for the irreligious to gain a pseudo-religious experience by practising ethereal genuflection.

I watched a replay of an evening English football match the other day. Players and referees knelt for exactly five seconds before the match began (the liturgical standard apparently). Listen to the commentator:

Night on night, week on week, month on month, however long it lasts, the message that black lives matter, never will become less relevant.

What next, white policemen washing the feet of black religious leaders? Well, that’s just me being silly. Of course, it would underscore my argument that we are in the midst of a revival of idolatry, but it would never happen. Surely?