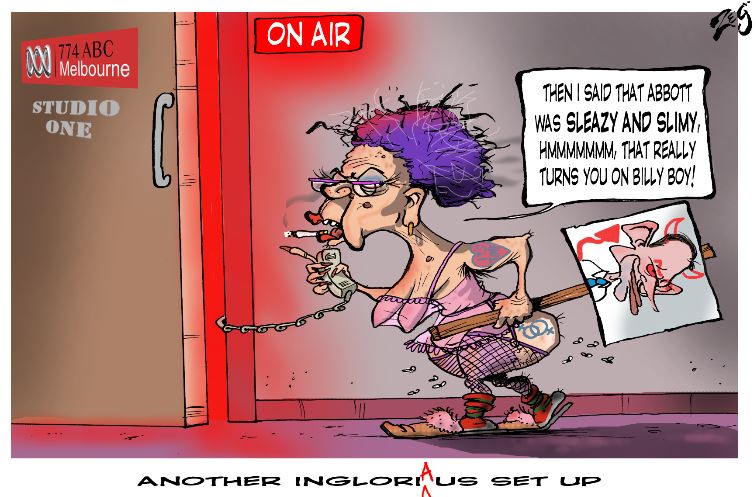 IT seems a lot of people don’t like Joe Hockey’s budget. Conservatives, for example, wonder why the Treasurer whittled a mere few dollars from the ABC when a good and vigorous slashing might have done the national broadcaster a world of good. After all, it can’t be a healthy for any organisation to believe its primary purpose in spending public monies is to hire more mates and spouses, squeeze Marieke Hardy into as many shows as possible and, just for fun, depict its critics having sex with dogs.

A little less in the way of disposable cash might have inspired Mark Scott’s minions to review priorities but, alas, Hockey stayed his hand, Aunty remains unreformed and hot-talking phone-sex granny ‘Gloria from Warburton‘, a lifelong member of the ratbag left and regular ABC talkback caller, is presented to the Prime Minister as entirely representative of aggrieved Australians everywhere.

Mind you, it might not yet be too late to save a taxpayer dollar or two and improve ABC governance at the same time.

Mark Scott, who bills himself ‘editor in chief’, takes home almost $800,000 a year, while Gloria of Warburton — real name  Judith Power — makes just 50 cents a minute talking dirty to strangers. So all Hockey needs to do is arrange a job swap. Tapping the Chaser’s middle-aged boys for advice on appropriate obscenities, not to mention absorbing ethnic stereotypist Chris Lilley’s tips on using the procreative verb as a form of punctuation, Scott could keep lonely men happy while Gloria settles into the managing director’s former office.

Gloria works cheap, can uphold the ABC’s standards of ambient obscenity and, best of all, her political leanings could not be a better fit. As for Scott, anyone who has uttered so many hollow pledges of impartiality before Senate Estimates has the makings of a phone-sex natural

So what about it, Joe? Here’s a chance to redeem yourself.

The case for war with PNG