Our COVID Response: Bordering on Incompetence 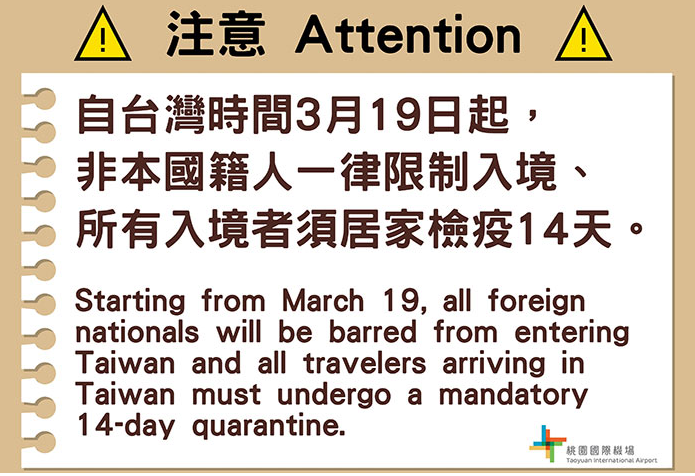 For the first time in history, the world has what might be called ‘Taiwan envy’. The tiny island territory that China claims as a province but whose president emphasises is an independent country —roughly three times the size of greater Sydney —is home to nearly 24 million people. That kind of population density should have made Taiwan a prime candidate for a coronavirus disaster. Instead, it has experienced fewer than 500 cases of the disease, roughly 80 per cent returning travelers.

Taiwan is the star of my paper The 12-Week Window: Coronavirus crisis Australia didn’t have to have. Other East Asian jurisdictions like Hong Kong and Singapore took a similarly tough approach to border security. Despite their high-risk status as major Asian transportation hubs, all three jurisdictions sustained the first shock of the coronavirus crisis remarkably well.

Consider that before the crisis hit, Taiwan’s capital, Taipei, had twelve weekly flights from the coronavirus epicentre in Wuhan; Hong Kong had at least eleven (plus high-speed rail connections); and Singapore had seven. That’s compared to three for Australia. Taipei, Hong Kong, and Singapore also form the nexus of an incredibly dense East Asian travel network. If the coronavirus was spreading anywhere in the region, they were bound to be hit.

It was proactive border security, not economy-wide lockdowns, that saved these densely populated jurisdictions from the worst of the coronavirus pandemic.

Immediately upon receiving the first report of an “undiagnosed pneumonia” in Wuhan pneumonia on Monday, December 30, Taiwan started to screen passengers arriving from Wuhan. It suspended the entry of all Wuhan residents on January 23. Singapore similarly cancelled all flights from Wuhan on January 23, with Hong Kong following suit on January 25. Australia suspended flights at the same time. The difference? The Asian jurisdictions actively screened passengers for illness and electronically recorded contact details in preparation for potential tracing. Australia greeted them with an information leaflet and the usual handwritten landing cards.

Taiwan’s China-wide travel ban actually came five days later than Australia’s. But after taking that big step, Taiwan continued to tighten travel restrictions throughout February, at a time when Australia was loosening them. By the end of the month, Taiwan had supervised quarantines in place for travelers from Hong Kong, Japan, and South Korea, with self-isolation for travelers from Iran, Italy, Singapore, and Thailand.

Australia didn’t start mandatory quarantines until March 27. When Australia did suddenly impose these sweeping new rules, chaos ensued. Taiwan and other Asian countries had been consistently ramping up quarantines throughout February and March, gaining valuable experience along the way. When Australia tried to go from zero to 100 overnight, it was too much, too late.

Nothing better illustrates the difference between Australia’s border complacency and Taiwan’s more aggressive stance than their approaches to cruise ships. Taiwan banned cruise ships on February 6, quarantining and testing all remaining cruise passengers after that date, whether or not any symptoms of coronavirus had been detected on their ships. Australia, of course, had the Ruby Princess fiasco — on March 19. That six-week gap tells the whole story.

Compared to Taiwan, Australia was slow to screen international travelers, lackadaisical in its self-isolation procedures, and inexplicably irresponsible in its management of the cruise industry. Once the coronavirus was allowed to enter the country, Australia’s public health response was excellent. But as Taiwan’s experience shows, a little more good sense at the border would have made it unnecessary.

Australia had twelve weeks to avert a coronavirus crisis. For the first six, its response was up there with the best. Then Australia took its eyes off the ball.

When the government failed to lock down the border, it was forced to down the country instead.

19 thoughts on “Our COVID Response: Bordering on Incompetence”