Warren of Lies: The Forked Tongue of a Very Red ‘Indian’ 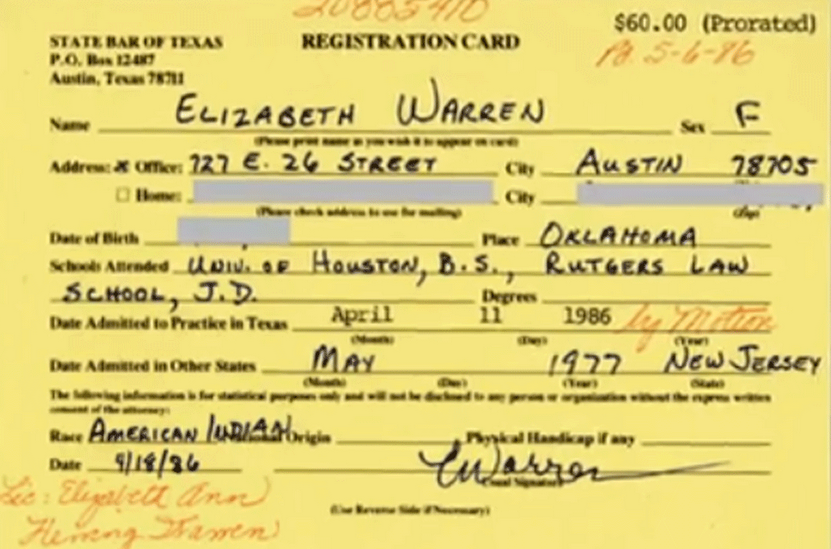 My basic attitude to people who want to enter the democratic fray as candidates for elected office is ‘good on ya’.  I’m something of a sceptic of the modern world’s embrace of massively over-powerful judges who, to varying degrees, have left behind old-fashioned judging and, under the guise of ‘human rights’, entered the arena of social policy-making.  Judges, and the lawyerly caste as a whole, are today’s aristocracy.  And they’re getting more powerful by the day.

So I’m nothing if not a fan of those prepared to try to get elected and enter the hurly-burly of the give-and-take of electoral politics.  Some of these people will hold political views I agree with.  Some won’t.  Some will seem competent. Some won’t.  Some will have charisma.  Some will be blander than a loaf of white bread.  On the whole, though, I like the fact that people go into politics.  Sure, I wish that in Australia we drew from a wider pool of backgrounds – far too many of our elected MPs follow the cookie-cutter route of being ministerial aides out of university, or think-tank types, or union officials. And then, having built up contacts, go on to win a pre-selection and all too often a seat in Parliament.

There are exceptions of course.  Sometimes along comes a politically incorrect, funny, politician with real charm, charisma and a Teflon coating.  This would be your Boris Johnson, who for all his sins looks to be on track to deliver a real Brexit, something for which we can thank, ironically, the crazy diehard Remainers, the lawfare fanatics, history’s worst ever parliamentary Speaker, the UK Supreme Court judges and all the Liberal Democrats.  These various pro-EU types could easily have walked away with a 95 per cent victory by taking Theresa May’s God-awful ‘deal’ that more or less delivered ‘stay in the EU outcomes’ and to which many genuine Brexiteers had resigned themselves.

But the pro-EUers pushed for more and more.  And then, with victory in sight, stupidity and greed took over.  Why in the world the Liberal Democrats have allowed an election is anyone’s guess.  They had Boris over a judicially created rack and could have tortured him and the Brexiteers for almost two more years until, for all intents and purposes, they’d have probably won a 100 per cent victory.  But they believed a poll or two, allowed an election — and the voters got a say.  And that was that for Team Remain.  Boris prevailed and prevailed big time.  This is Exhibit A, the lucky charismatic politician.

President Trump is another example of the non-cookie cutter politician. He’s an archetype, in fact.  Has anyone noticed that, more than any other politician I can think of in my lifetime, Trump has delivered on his promises.  At least he’s done so to the extent Congress has permitted.  He’s appointed only solid, non-activist, interpretively conservative judges off the very list he promised he’d use.  (Maybe the Liberals here in Australia, who have a truly terrible record on judicial appointments, might learn something. )  He has cut taxes massively, not a tiny bit (like here), that won’t even keep up with bracket creep.  Trump has deregulated more than any President, including Reagan.  He’s doing everything he can to get a functioning border in place.  He’s completely jettisoned Obama’s foreign policy.  As I said, he’s basically gone down the list of his election promises and tried to deliver on them.  It’s so startling that you realise ‘he must not be a career politician’, for such is the novelty of any public figure actually treating ‘a promise made as a debt unpaid’.

Take the above thoughts as a salute, more or less, to most politicians wherever they be on the spectrum.

Still, every so often a politician comes along who I find ghastly.  Readers of this publication will know well that that has been my view of Malcolm Turnbull from day one: politically untrustworthy and a tireless worker when it comes to stabbing others in the back, but a whiny baby when it happens to him.  Sanctimonious as they come, with dollops of the preachy and no seeming self-awareness.  All that and possibly the worst-ever political skills ever to take up temporary residence in The Lodge, by which I mean that after backstabbing and plotting his way to the top he was wholly useless once there.

And here’s another example of a politician I find ghastly, this time from the US.  Not Bernie. I don’t agree with him on anything much, but that’s life.  He seems sincere enough.  I think Trump would destroy him in the election so it may be that the Democratic machine has been wise in bending over backwards to get the shell of a man that is Joe Biden into prime position to win the nomination.  But it will all the same for Trump, facing not Bernie but the walking dead.

No, the Democrat I find ghastly is Elizabeth Warren.  First off, it’s not clear she’s capable of telling the truth.  She flat out lied about being an American Indian to get the affirmative action spot at Harvard Law School.  When she finally did a DNA test it showed less Native Indian blood than the average American caucasian, meaning close to zero.  Yet no one really believes she’d have bagged that job at Harvard without the affirmative action tick.  That’s unfortunately how today’s universities work.  Look, I hate affirmative action: its medium and long-term effects are especially pernicious.  But its one redeeming virtue is the pious hope that something good comes of putting a poor slob from a very unlucky background in a job he or she could not have otherwise snagged.  It is not meant to put one of the world’s comparatively luckiest persons from a better than average background into that job.  What Warren did was scamming of the worst sort, although it’s what affirmative action not only encourages but everywhere delivers.  Touting herself as Harvard’s first person of colour, she should be eternally ashamed — allowing, of course, that shame is an emotion she is capable of feeling.

Warren also lied about being fired because she was pregnant. She lied and said all her kids went to public schools (ie., state schools).  Nope, turns out one went to a very exclusive private school.  It makes you wonder why anyone would tell such an obvious lie, one so easily checked.  I mean, I know that almost all the US media acts as the propaganda wing of the Democratic Party, but come on Liz!  She also lied at one time about her dad being a janitor.  Nope, the list of whoppers goes on and on.

Then there was her embrace of the most virulent strand of identity politics.  Yuck!  Yuck! Yuck!  (I am not wholly sure I got the first letter of those three emphasised words correct.)  Did any readers see the clip where she promised some nine-year-old trans child that the kid would have a veto over any Secretary of Education she was minded to appoint.  Really?  Nine-year-olds get a veto because they happen to fall into some identity group Liz wants to cater to?  Only those without a functioning brain could think that sort of genuflecting to group politics is a good idea.  As Mark Steyn said, ‘why not let the nine-year-old fly Airforce One then?’.

Then there was her dishonest lefty socialism.  Bernie Sanders is honest about it, more or less, down the line. I think his views, if implemented, would have terrible consequences — mostly for the people at the bottom he wants to help.  Warren wanted much the same policies but was unable to be honest about it.  Her health care policies – medicare for all – would bankrupt the US.  And she is easily smart enough to know it.  So she lied and prevaricated.

Her awfulness goes on and on, but worst of all is the way she bowed out of the race.  She blamed her lack of success – yep, you guessed it in one – on sexism.  What else, she must think, could stop someone like her?  Leave aside the fact that the majority, the big majority, of voters in the Democratic primaries are women.  It’s been women who didn’t vote for her.  Warren didn’t win a single state.  She didn’t even come second in a single state, not even in her home state of Massachusetts.  So apparently it’s all the women voters who are sexist! This is more identity politics: women only get to count as women if they vote for another woman.  God forbid they have a brain, think for themselves, and see this awful candidate as the unlikeable, totally untrustworthy, lousy contender she wanted to be.  If your reproductive organs show two X chromosomes you have to vote for a woman.  This is the evil of identity politics that is every day more and more infecting the Left side of politics – and truth be told, big chunks of the Coalition here in Australia.

I could go on.  But instead I’ll wrap this up and go for a beer so I can toast Elizabeth Warren’s decision to quit the race.  She says it was due to sexism.  Come on, Liz!  We all know it was due to prejudice against Native Americans.

A Broken Legal System Without a Doubt