What Everyone Has Overlooked in the Pell Case 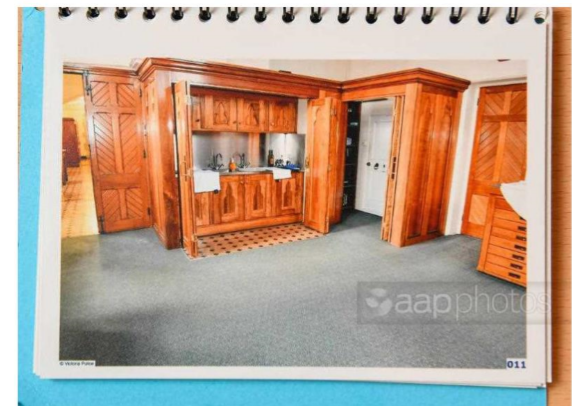 Because this is not a mystery story I’ll get to the point straight away.

The Crown claimed, and still claim, that the complainant’s credibility was enhanced because he located the wine in the correct area of the sacristy, that is, in the alcove in the corner. To this the defence replied that maybe he got that knowledge from a tour back in 1996. But an attentive viewing of the interview with Pell and the police in Rome shows that originally the complainant did not locate the wine correctly at all. Beyond doubt the original location was a storage area that may be called a kitchenette as it contains two sinks (above). When the complainant visited the sacristy with the police he looked at that kitchenette and said that it was just the same as 1996. But the police were to learn after the interview that in 1996 the “kitchenette” was a wardrobe. The sinks had not been installed and the wood panels that apparently the complainant had described so well were not there. It was used for hanging albs.

So it is simply not true that, at first, the complainant correctly located the wine. What he did was place the wine where in 2016 it might reasonably be thought that the wine would be located – and incidentally, he got the colour of the wine quite wrong, as in 1996 only white was used. What this shows is that he could only have acquired his knowledge at a much later date, either from a visit or from coaching – an explanation that naturally he denied. Manifestly, this puts a completely different light on the complainant’s credibility; indeed, it destroys it. But these facts, which are very clear from open sources, appear not to have been appreciated. It’s important, then, that these points are made known before the High Court rules in a couple of weeks’ time. The jury, which may have been understandably misled by the Crown’s claims, would surely have taken a different view had they understood the evidence properly.

I have explained the facts with reasonable care here.[i]

That’s the chief point I wish to make and which I hope others will take up. I’ll continue by discussing the relatively minor point of how something so important came to be overlooked. For it seems to me as if someone in 1986 had come across some clothing in a dingo’s lair … and just shrugged.

In the first place, then, I have spent almost a year thinking about the Pell case yet I have overlooked the point I am now flagging. This despite the fact that I have watched the Rome interview numerous times. Truth is the daughter of time. It takes a while to join up the dots.

I am not totally surprised at the oversight, and in itself it is not perhaps the most important issue. But it assumes importance insofar as the Crown are using this issue as a significant boost for the complainant’s credibility. As I have argued, though, if we take a good look at what has been staring us in the face all along we can see how the Crown’s contention undermines it. Maybe that’s why the jury deliberated as they did.

Second, since August all my work has been indebted to the brilliant ruling of Court of Appeals’ Justice Mark Weinberg, and all I have attempted since is to dot i’s, cross t’s, and write footnotes. Even so, while the main points are made in the ruling, it took me a while to join the dots. For one thing, it can happen that words such as storage kitchenette, alcove, wood panel, vinyl, concertina doors and so on can be a bit of a jumble until one starts to scrutinise the photos of the sacristy carefully. One has to do this for oneself until, eventually, one appreciates such truths as the fact that anyone at the double doors is quite invisible to anyone in the alcove and vice versa. A second point is that although Weinberg records that the complainant failed to note the alterations in 2004 (a point quite ignored by the majority) I was hazy about what exactly these were.

Let me turn now to Robert Richter, as he is helpful.[ii]  Incidentally, when I first learned of Richter through the lens of The Guardian, I got the impression of someone whose theatricality might have provoked an adverse reaction in the jury, but since then I have come to appreciate his careful and patient skill in eliciting the truth by cross-examination. To the jury, then, Richter makes it clear that the alterations to the sacristy apply especially to the kitchenette. That word is never used in the police interview; the police refer to a “wood panelled storage area” immediately to the left of the door if one is entering the sacristy. But this is what Richter is talking about. The complainant looks at this and says it has not changed. It had, though, for in 1996 it was a wardrobe (as Portelli says). And Richter cites Potter. It was used for hanging albs. 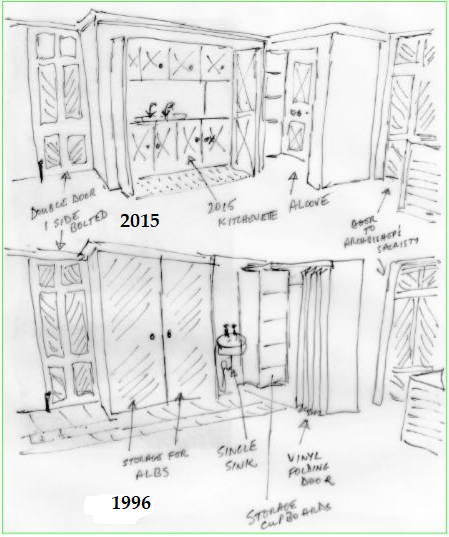 In his Unfortunate Opinions website, blogger David Pearce illustrates the changes in the sacristy between 1996 and 2015, as recalled by Potter

But even Richter does not spell things out, or at any rate, those who have repeated him did not make the point clear to my mind, namely, that as the Rome interview shows, it was in that wardrobe that the complainant located the wine. And here, a further point in my learning curve, I had to gradually acquire a sense that it was Detective Reed who conducted the walkthrough in March 2016, the Rome interview in October, and after this further interviews so that finally in December his attention would focus on the alterations he learned from Potter and Portelli so that from December 6 he would surely have appreciated how untenable the idea was that the boys had really found a bottle between the albs. And he would have probably realised that his knowledge of the wood panelling was of panelling that would not have been there.

But what do we find at trial? That the boys found the wine in the alcove – in what comes also to be called a kitchenette, indeed, a “storage kitchenette” to retain some continuity with the older story. Moreover, that is where the assault is re-situated. But the stories just can’t be harmonised. For one thing, as indicated, if one is concealed in the alcove it is physically impossible to see someone at the double doors where Pell planted himself (and the complainant can recall how one was open and the other bolted, just like the photos). The wardrobe is in the way. So yet again a narrative shift is necessitated.

Common sense tells us that these shifts are suspicious. Originally, for example, in the Rome interview, the police were working on the basis that Pell nipped from the sanctuary to the sacristy straight after Mass – they had no idea about the procession. Later, the complainant can recall in some fine detail the procession he only started talking about in 2018.

But the narrative shift about the wine is different. For the evidence that the complainant could describe the wood panels of the kitchenette where the wine was found (when in fact it was not a kitchenette in 1996 and the wardrobe did not yet have those panels) is more than awkward. The jury might have thought, ‘well he did not know as much as he thought he did, and that’s understandable given the trauma’. The truth, however, is not that he knew too little but that he knew too much. For how could he possibly have known about the renovations done in 2004 unless the complainant had up-to-date information? What he knew could not be a memory. “He came across as someone telling the truth.” Not as far as finding wine in the wardrobe went!

As I have been explaining, it took me a while to appreciate this. Finally, then, Pell’s team are extremely intelligent. Bret Walker’s submissions are always comprehensive, succinct, and penetrating. His writings are extremely helpful. However, the defence seems to concede that the complainant located the wine correctly – which he did eventually. They attempt to diminish this by a tour of the sacristies as a boy. But quite apart from the fact that William Wardell’s ecclesiastical art might not have been all that memorable for a modern teenager from North Melbourne, the response misses the point that, not only did the complainant not get the location right, but that he got the location wrong in a way that convincingly shows he is not relying on his memory.

Yet the Crown – in desperation, for their case is collapsing – are now are clinging to this badge of credibility as a last ditch attempt to shore up their case. It’s hardly convincing, admittedly, for anyone can see that someone about to tell such lies about the Cardinal would surely have done some homework. So perhaps the point I am making would not have been regarded as significant at first. At any rate, to come to our final person who has overlooked this, we can mention Pell himself. For this is a point he has never picked up on.

Here we can make a comparison with the parting of the robes. This was proposed to Pell in Rome, but while he was emphatic about the ludicrous claims taken as a whole, he was clearly not interested in making fussy little objections grounded in his knowledge of liturgical attire. It probably didn’t occur to him that what was described was impossible. Again, the police are not aware in October that he had his own sacristy and Pell has to explain things as he thought of them, for example, about the wine being locked away in a formidable safe. So he is hardly to be expected to appreciate all the minutiae, namely, that the boys found wine immediately to the left in a storage area that in Pell’s time was a wardrobe – though Pell does recognise when the police are talking about some wood panelled furniture and, at one point, he mentions that the room was used for storing vestments. This, however, is in a confused exchange as it has not yet been clarified perfectly as to what sacristy the police were talking about. Logically speaking, to have furniture immediately to the left of the doors provides a unique descriptor as only a wall is immediately to the left of the Archbishop’s Sacristy – but Pell would scarcely have attended to such details.

Speaking under correction, then, everybody in the Pell case has overlooked the mislocation of the wine. The point that might have been refuted by anyone with access to the police video[iii] has not been challenged. It’s worth challenging though. If Pell is to take the M1 to Melbourne the last barrier of Barwon  Prison must be unbolted.

Chris S Friel is a theologian and philosopher located in Wales, UK. His other articles on the Pell case can be found on Academia at https://chrisfriel.academia.edu/research

[ii] I had read this excerpt of the transcript of his submission to the jury without fully appreciating it: https://quadrant.org.au/opinion/qed/2019/09/the-contradictions-of-the-choirboy/

[iii] Or perhaps a transcript. In view of various discussions about the viewing of videos and the intellectual content of videos I think it would be helpful to have the transcript of the Pell video in the public domain.

9 thoughts on “What Everyone Has Overlooked in the Pell Case”

Scaling up the Prospect of Tyranny